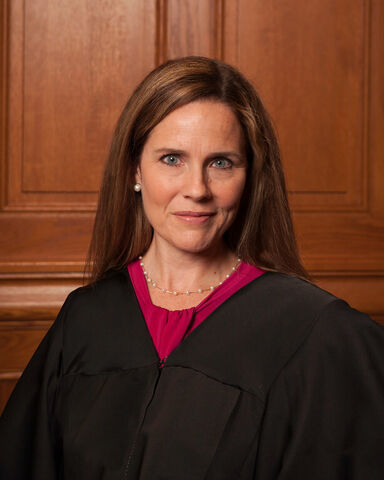 Amy Coney Barrett may be a woman but she is no Ruth Bader-Ginsburg. The staunch and conservative catholic is Donald Trump's Supreme Court choice to replace Ginsburg. As most of us know, the women Trump keeps around him are often those who defend and uphold patriarchy and misogyny.

Amy Coney Barrett's record shows she follows a track record of upholding socially conservative beliefs. Recently, she supported an action that would allow men accused of sexual assault to sue their accusers. According to Ms. Magazine, " Last year in Doe v. Purdue University, she wrote an opinion allowing a male student accused of sexually assaulting a female student to sue for alleged violations of the 14th Amendment and Title IX of the Education Amendments of 1972."

A definition of what the 14th Amendment protects from Dictionary.com says, "an amendment to the U.S. Constitution, ratified in 1868, defining national citizenship and forbidding the states to restrict the basic rights of citizens or other persons." Both Brown v. Board and Roe v. Wade is said to be protected under the 14th Amendment. Starting in 1971, Ruth Bader Ginsburg used the 14th Amendment to convince the courts that The Equal Protection Clause applied to women in five different cases brought to the Supreme Court. Unlike her predecessor, Barrett uses the 14th amendment to protect a man from the consequences of sexual assault allegations rather than expanding the rights of women.

Barrett has said throughout her career multiple times that her personal opinions are separate from her opinion on the law. During her 2017 confirmation hearing, Barrett claimed, "I would never impose my own personal convictions upon the law." Likewise, Politico reported, "that sentiment echoed a 1998 law review article she co-wrote about Catholic judges and death penalty cases which concluded: 'Judges cannot-nor should they try to-align our legal system with the Church's moral teaching whenever the two diverge".

However, also reported by Ms. Magazine, as a 7th Circuit Court Judge, Barrett "ruled against abortion rights in a case involving restrictions targeting pregnancy conditions or populations of women and in a case involving restrictions on young women's access to abortion." It does seem that Barrett's personal opinions affect her work decisions after all.

Amy Coney Barret has also been called by the Human Rights Campaign "an absolute threat" to the LGBTQ community. Other than her catholic belief that marriage is between a man and a woman, Barrett's beliefs endanger the entire LGBTQ community at large. She has claimed Title IV protections do not extend to Transgendered Americans, misgenders transgender people, among other issues relating to LGBTQ safety and wellbeing. According to PinkNews, "Lambda Legal was among 27 LGBT+ rights groups opposing Barrett's confirmation to the Seventh Circuit" in 2017. Lambda Legal was also adamant to point out that "It is impossible to overstate how much is at stake, not only for LGBTQ people and everyone living with HIV but for our entire country" as Barrett believes that the Affordable Care Act is unconstitutional. Lambda Legal also reported that "Judge Barrett has given speeches for Alliance Defending Freedom, an organization whose animus towards the LGBTQ community is so great; it earned them a "Hate Group" designation from the Southern Poverty Law Center."

Particularly attention-grabbing, Barrett has been accused of being "openly and firmly" anti-Brown vs. Board of Education by Black Lives Matter in a petition on their official website.

One of the worst stances of Judge Amy Coney Barrett is that she’s anti-Brown v Board of Education — she openly and firmly believes that the Supreme Court case that desegregated our schools was wrongly decided.

In what seems like a direct political move to heighten tensions, Barrett and Trump's other nominees refused to either deny or praise Brown vs. Board when asked.

According to the Independent, "Michael Steele, the former GOP chairman and Maryland's first African-American Lieutenant Governor, suggested in a phone interview that Trump nominees' silence on Brown v. Board of Education leaves open the possibility that the President is deliberately nominating judges who are at least tacitly in favor of rolling back many civil rights protections.
'If you can't tell me that Brown v. Board of Education was decided correctly, that our public schools should, as institutions of learning, be desegregated, then you're telling me that the status quo prior to Brown was…the way to go,' he said."

When speaking of Brown v. Board of Education, it is commonly believed that schools in the U.S. are now places of equal opportunity. However, according to statistics from U.S. News, schools in the United States are still separate and unequal even with Brown vs. Board of Education. The school-to-prison pipeline is a stark reality that shows inequality in our country runs deeper than a single court decision could ever heal. Statistics provided by U.S. News shows that Black Americans are suspended and expelled at three times the rate of white students. Furthermore, approximately 2 million black students attend schools where 90 percent of the student body is made up of minority students while 80 percent of principals in public schools were reported to be white by The U.S. Department of Education in 2001-2008. In addition, it is reported that on average, schools serving more minority populations have less-experienced, lower-paid teachers who are less likely to be certified. Other statistics show these marginalized students often have less access to their educational needs like food, school supplies, and parental help with classwork. These damning statistics end with the grim outcome published in a study by The Journal of Social Psychology Personality Science, "The more students fall behind, the less likely they are to graduate from high school or enter college and the more likely they are to become incarcerated."

Barrett has never directly said she is anti-Brown vs. Board, but it seems the United States already has. As we can see, the court decision hasn't done much to create equality in education.

While Barrett has not said that she's anti-Brown v. Board, her record with issues of race and segregation isn't pretty. In 2018 Barrett was a part of a panel that refused to hear an appeal of a case involving the segregation of Black workers at AutoZone. The Human Rights Campaign detailed the case as such: "a Black Autozone employee who faced racial segregation when he was laterally transferred from one Autozone location to another based on Autozone's Chicago policy of 'segregating employees and intentionally assigning members of different races to different stores."

If all this information isn't scary enough, Barrett's belief in "originalism" suggests she may think Brown vs. Board is unconstitutional even if she hasn't verbally denounced it. Barrett is an originalist, meaning she interprets the Constitution under the premise of what the original authors might have intended. In an interview done by Vox, Keith Whittington, a professor of politics at Princeton, said of originalism: "I think of it simply as a commitment to think that one, the meaning of the text of the Constitution is fixed at the time of its adoption, and two, that that has consequences for how judges ought to adjudicate cases. Then there's lots of wiggle room as to how much consequence that should have for judges in particular kinds of cases, how exactly do we determine what the meaning of the Constitution is, etc."

This in combination with her professional relationship with Judge Antonin Scalia is deeply concerning. In 2011, Scalia said, "You do not need the Constitution to reflect the wishes of the current society. . . The only issue is whether it prohibits [sex discrimination]. It doesn't. Nobody ever thought that that's what it meant. Nobody ever voted for that. If the current society wants to outlaw discrimination by sex, hey, we have things called legislatures, and they enact things called laws."

Therefore, even if Barrett is not directly anti-Brown vs. Board, she upholds beliefs that are against civil rights being upheld by the Constitution. With an emphasis on originalism and conservatism, it is clear Barrett does not believe our Constitution should grow with our society's values. That alone is as dangerous as her radical-catholic beliefs.

Due to her tutelage under Antonin Scalia, legal beliefs, and professional history within the court, it's not unreasonable to believe Barrett as a Supreme Court Justice could destroy Ruth Bader Ginsburg's legacy. What led Ruth Bader Ginsburg was equality and feminism, what leads Barrett are views that could push the United States back decades in progress. It is not simply because she is catholic, it is because social conservatives are and have been viciously attempting to "make America great again" through the law, and that is life-threatening for women, the LGBTQ+ community, and black and brown Americans.

If she gets the seat, the Supreme Court will have a 6-3 conservative majority.

5 Things Trump Claimed That Were Just Flat Out Lies

R.B.G. Will Be The First Woman To Lie In The State Capitol

There Is No Such Thing As Justice For Breonna Taylor