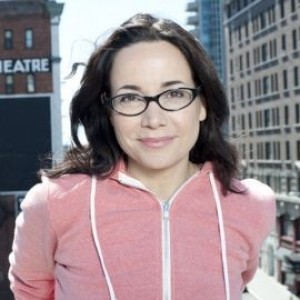 Calling all comedy nerds! Get your tickets now for a live recording of BUST’s Poptarts podcast, featuring the legendary Janeane Garofalo! Hosted by BUST editors and fellow funny people Emily Rems and Callie Watts, Poptarts celebrates dynamic women in pop culture. And, on December 8th at 1:00pm, you can watch them in action, interviewing the master of razor-sharp, feminist wit.

Janeane Garofalo is a veteran comedian, writer and actress. She has co-starred in some of your favorite films including Romy and Michele’s High School Reunion, Reality Bites, Wet Hot American Summer and Sweethearts. Garofalo’s progressive stand-up put her on the map and continues to make waves across the country. She is credited as being a founding member of the “alternative comedy” scene. Garofalo made her television debut on The Ben Stiller Show, which lead to a role on The Larry Sanders Show, earning her two Primetime Emmy Award nominations for Outstanding Supporting Actress in a Comedy Series.

She was a cast member on Saturday Night Live and appeared in a plethora of TV shows including Seinfeld, The West Wing, Girlfriend’s Guide to Divorce as well as the prequel to Wet Hot American Summer. She co-wrote a comedic self-help book with Ben Stiller, titled Feel This Book: An Essential Guide to Self-Empowerment, Spiritual Supremacy, and Sexual Satisfaction, which made the New York Times bestseller list. With everything she does, she communicates truth about women’s lives and we are honored she is letting us pick her brain.

Justine Bateman Gets Real About Fame On The Latest "Poptarts" Podcast