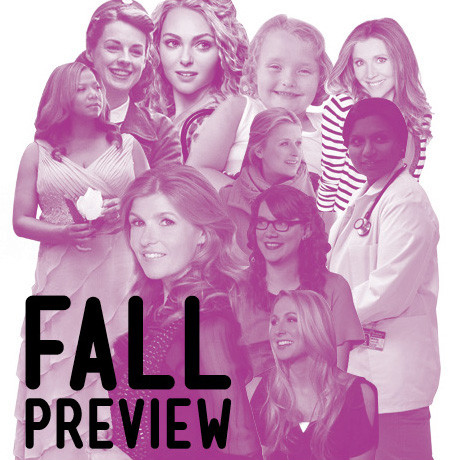 Lady-friendly TV shows you won't want to miss this season

Thank Maude Mindy Kaling is starring in a show of her own creation, just in time for Tina Fey to pass her the funny-female-writer torch as 30 Rock enters its last season. Playing a hot mess of an OB/GYN who’s obsessed with romantic comedies, Kaling’s Mindy Lahiri seems to combine a less-grating Kelly Kapoor (her character from The Office) with Kaling herself—at least the way she comes across in her book of essays, Is Everyone Hanging Out Without Me? Expect awkward dates, multiple Meg Ryan references, and lots of good music (the pilot alone features Le Tigre and M.I.A.). If you can't wait for the premiere, watch the entire pilot right now!

The captivating Connie Britton (who killed it as Tami Taylor in the underrated Friday Night Lights) is the star of this hour-long drama, playing Rayna James, a hard-headed country-music legend dealing with a flagging career, a needy family, and an unscrupulous sexpot of a stage rival (Heroes’ Hayden Panettiere). Though the premise sounds a little CMT, the fact that it’s written and produced by Callie Khouri, the gal who wrote Thelma and Louise, bodes well for its feministiness.

Former Scrubs star Sarah Chalke (who also played the second Becky on Roseanne) is Polly, a woman who’s “determined to be the best working single mom in the universe.” The laughs in this comedy come from the wackadoodle parents she and her daughter are forced to move in with, roles shamelessly embraced by Elizabeth Perkins and Brad Garrett. The payoff of How to Live, which is both written and directed by women, will hopefully be a lighthearted take on the still-stigmatized undertaking of single-motherhood.

Already a hit across the pond on the BBC, this hour-long drama (based on the memoirs of a real midwife) is a serious ladyfest. Jessica Raine plays young nurse Jenny Lane, a newly minted midwife living in a convent in London’s rough-and-tumble, poverty-stricken East End in 1957. The show, written by Heidi Thomas (I Capture the Castle), follows Lane as she struggles to serve the community’s steadfast women, helping them birth their babies (some gritty scenes are not for the squeamish) and celebrating life in the midst of difficult circumstances.

Whether you loved or loathed it, Sex and the City changed the landscape for women in television, and now we get to see Carrie Bradshaw’s life pre-Samantha, Miranda, and Charlotte, as a high schooler growing up in Castlebury, CT. Though journals take the place of Carrie’s laptop, the show features similarly witty, albeit PG-13-rated banter (in the pilot, sex is referred to as “hot-dogging your keyhole”), self-reflective voiceovers, and plenty of sweet ’80s style. Watching young Carrie (played convincingly by AnnaSophia Robb) pal around with her crew, worry about losing her virginity, deal with her mother’s death, and fall in love with Manhattan feels a lot like catching up with an old friend—one who aged backward.

Mamie Gummer may be the progeny of Hollywood royalty, but in this hour-long dramedy, Meryl Streep’s daughter holds her own as the supersmart, relatably dorky Emily Owens, a first-year intern at Denver Memorial Hospital. Like a less soapy, more awkward Grey’s Anatomy, the show combines heart-tugging medical situations with Owens’ attempt to leave the insecurities of her nerdy past behind—a greater challenge when she finds out her high school nemesis is a fellow intern. Big ups to the show for also casting two black female leads, one of whom plays a lesbian (diversity!).

Queen Latifah, Alfre Woodard, Phylicia Rashad, and Jill Scott are just a few of the amazing women who will be congregating at Truvy’s beauty shop to share triumphs and tragedies while getting their hair did in the retelling of this classic 1989 female-friendship film. The choice cast alone makes it worth tuning in to, but if the made-for-TV version captures the original’s “laughter through tears” heart, Queenie, who also executive-produced it, will surely have a home run on her hands.

The Nikki and Sara Show

You may be an avid listener of Nikki Glaser and Sara Schaefer’s podcast, You Had to Be There, or you may be familiar with the viral video “PSA” these comedians created asking Justin Timberlake to make music again. Come fall, these hilarious besties will be hosting a weekly late-night talk show featuring sketches, monologues, and celebrity and street interviews. Considering they’ll be taping in the former TRL Times Square studio, we think MTV’s moving in the right direction.

Even if you’ve never seen an episode of the beauty-pageant reality series Toddlers & Tiaras, chances are you’re familiar with six-year-old Alana, the precocious (and seemingly well-adjusted) star of this spin-off. In fact, her hilarious catchphrases, including “honey boo boo child” and “a dollar makes me holler,” have worked their way into the everyday vernacular (especially at BUST H.Q.). We can’t condone the wacky, tacky stage life, but that doesn’t mean we won’t grab some “go-go juice” (Mountain Dew) and “pageant crack” (Pixy Stix) and root for our favorite little belly wiggler every week.

All images courtesy of their respective networks.