All-Black on the Silver Screen: 11 Goth Girls in TV and Film That Led Us to The Present-Day Wednesday 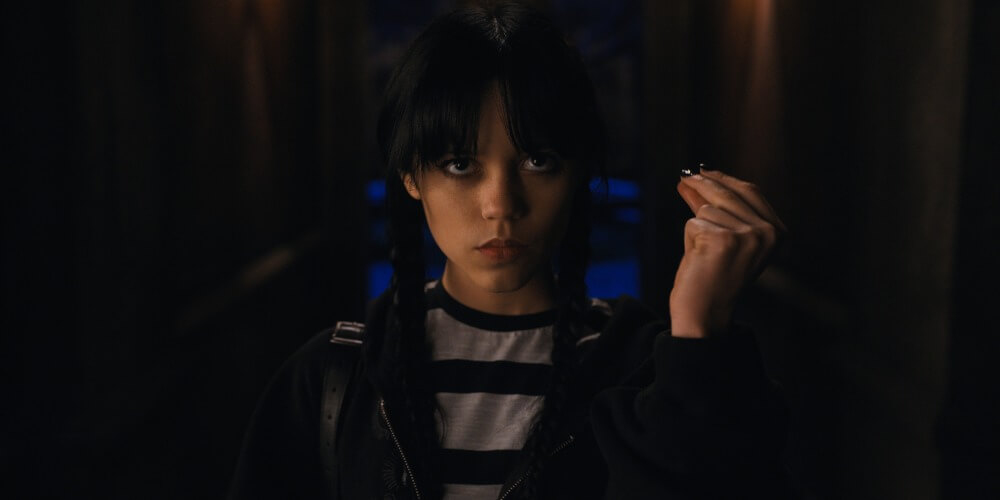 We’ve been seeing a whole lot of Wednesday Addams’ creepy, yet cute, on-screen looks since the release of Netflix’s Wednesday in late November, but Jenna Ortega wasn’t the first to bring an “every day is Halloween” vibe to a beloved character. Goth is a music-based subculture derived from punk rock that became big in the ‘80s thanks to artists like Siouxsie and the Banshees, The Cure, and Joy Division, but the accompanying look (think big hair, big shoes, big eyeliner, and lots of black and fishnet) has been evolving since the beginnings of pop culture. Read on for a list of gothic girls in TV and film that have been enchanting audiences from the early 1900s through today. 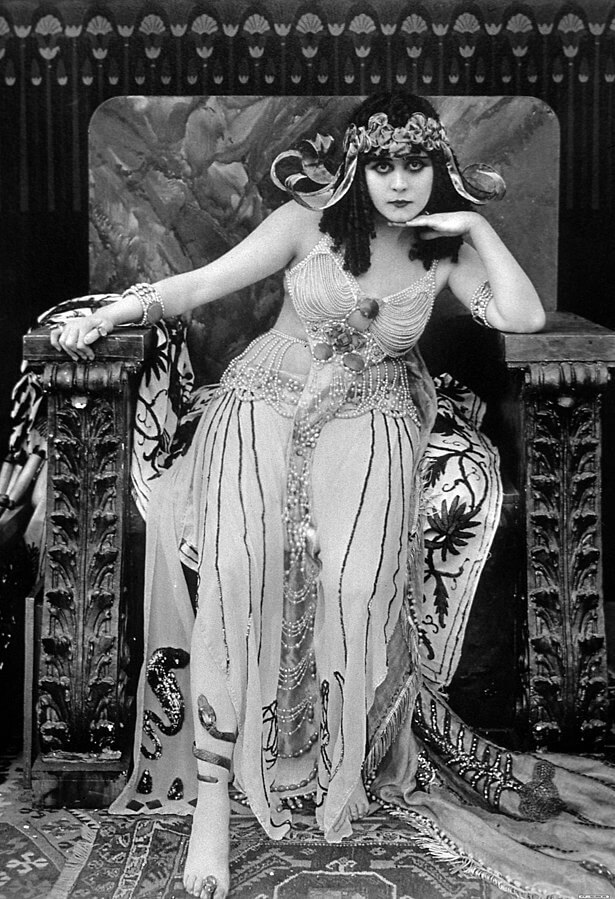 Photo Credit: Fox Film Corporation, Public domain, via Wikimedia Commons https://commons.wikimedia.org/wiki/File:Theda-bara-cleopatra.jpgPerhaps the first to embody the “vamp” – an often darkly-dressed seductress who uses her femininity and sex appeal as a weapon – archetype, Theda Bara was a silent film star known for playing dark and sultry “femme fatale” roles. Starring in more than forty films between the years of 1914 and 1926, Theda Bara’s persona, propped up by studios at the time, was a fictitious one of an Egyptian woman interested in the occult.

Maila Nurmi brought to life her iconic vampire persona after getting noticed by program director Hunt Stromberg in 1954, when he was searching for a way to sex up his channel’s late-night horror screenings. She began appearing as Vampira whenever she left the house, and quickly rose to celebrity status as a result. The Vampira Show was canceled after just eight months on the air, as Nurmi had no desire to sign over the ownership of her character. 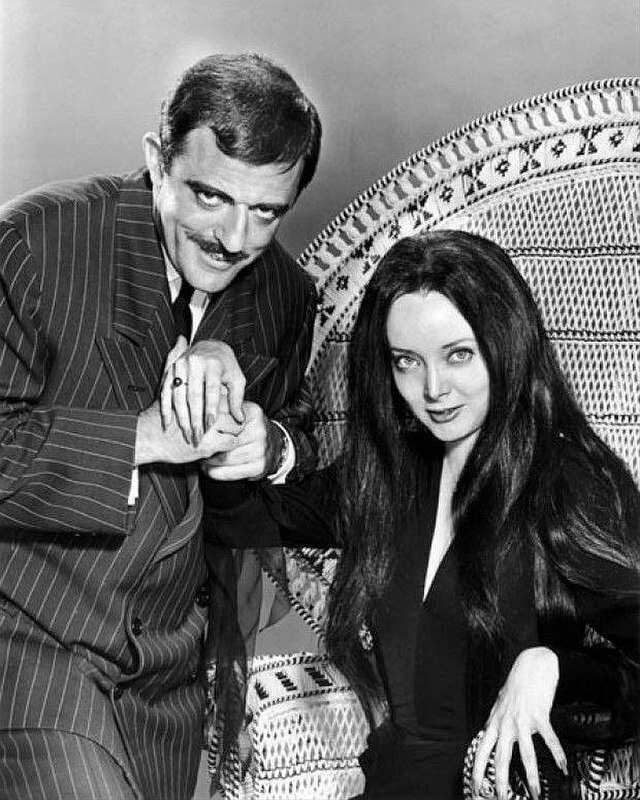 Photo Credit: ABC Television, Public Domain, via Wikimedia Commons https://commons.wikimedia.org/wiki/File:Carolyn_Jones_John_Astin_The_Addams_Family_1964.JPGThe Addams Family’s leading lady, always clad in a long, simple black gown with a plunging neckline, was played by Carolyn Jones in the original television adaptation of the franchise, though the role has since been reprised by the likes of Anjelica Huston and Catherine Zeta-Jones. She is a skilled musician and caring mother to children and plants alike and has a disdain for the pleasant and cheery. 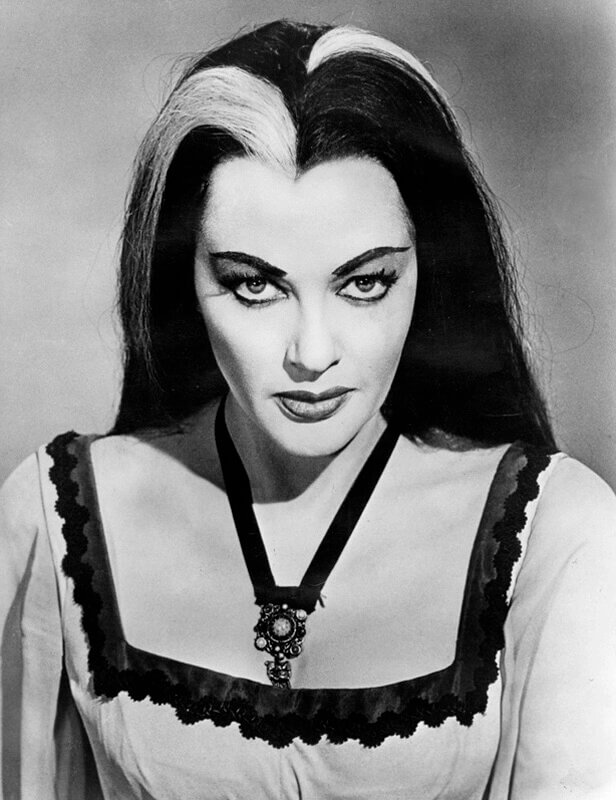 Photo Credit: Unknown Author, Public Domain, via Wikimedia Commons https://commons.wikimedia.org/wiki/File:Yvonne_de_Carlo_in_1964.jpgWhen the first Munsters’ matriarch was scrapped after the pilot episode due to resembling Morticia Addams a bit too much, Yvonne De Carlo’s character was born. Lily is a reasonable yet fiery-tempered vampire housewife who, while stunning with her black and white hair and elegant gothic dress, works as a welder, a fashion model, and a beautician throughout the course of The Munsters.

Cassandra Peterson as Elvira in Elvira, Mistress of the Dark (1988)

Cassandra Peterson’s darkly inclined “valley girl” persona - with a big attitude and the bosom to match – got her start as the host of Elvira’s Movie Macabre, a weekly B-movie presentation. Her carefully curated aesthetic, charm, and twisted sense of humor won her enough popularity to star in her own film in 1988. This was only the start of her ongoing career, which has included countless cameos, voice-acting roles, reprises of Movie Macabre, and appearances on reality shows such as RuPaul’s Drag Race. Elvira’s unique combination of campy glam and funeral chic solidified her as one of the most legendary goth girls in entertainment history. 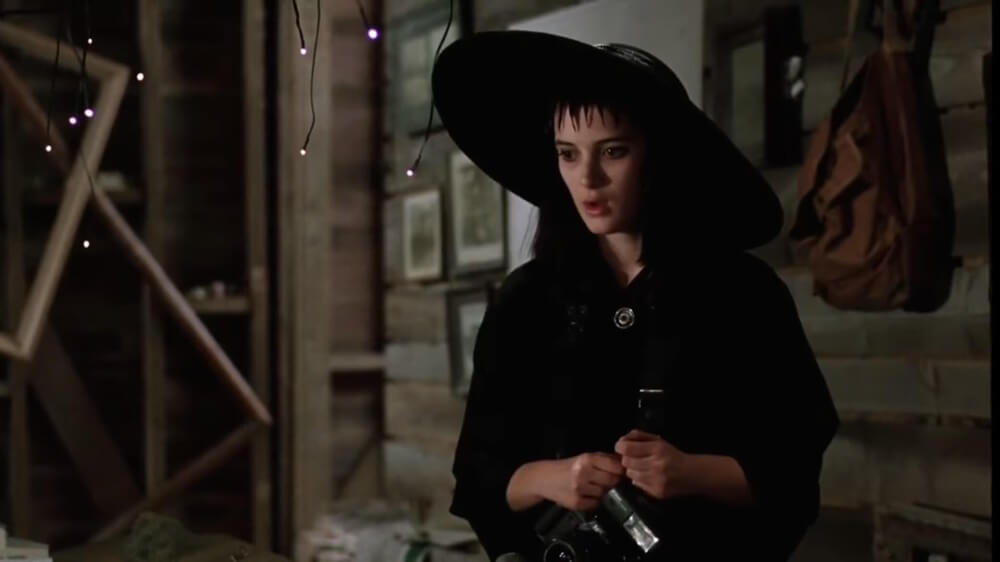 Photo Credit: Screengrab from YouTube https://www.youtube.com/watch?v=OuuqzkZ5MtY&t=26sWinona Ryder’s reputation as a gothic icon began in 1988 with her starring role in Tim Burton’s Beetlejuice, in which she plays the morose and darkly-inclined teenager Lydia Deetz. In the film, she serves classic romantic goth looks while delivering memorable quotes, such as “I, myself, am strange and unusual” and “my whole life is a dark room,” still seen on T-shirts and in social media bios to this day.

Fairuza Balk as Nancy Downs in The Craft (1996) 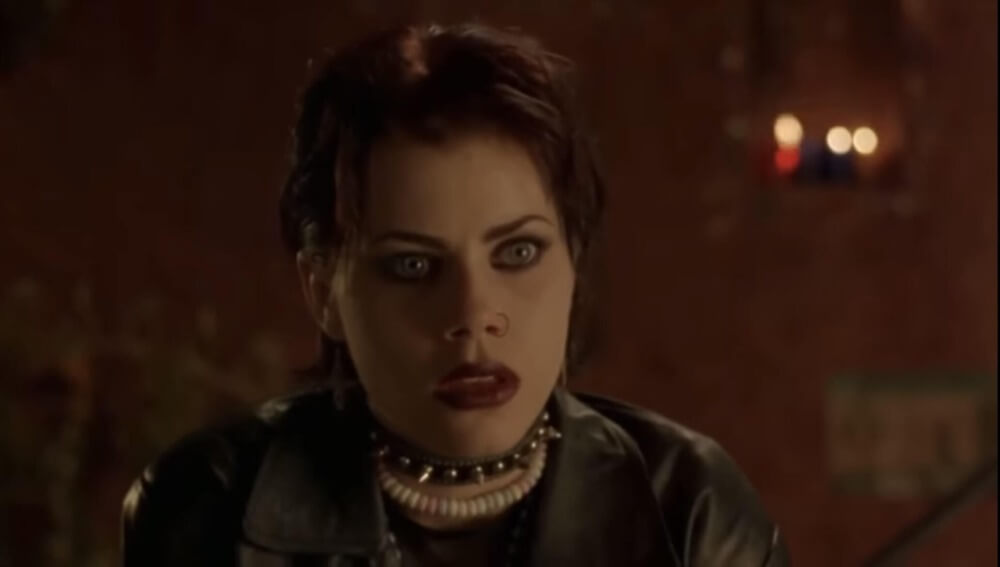 Photo Credit: Screengrab from YouTube https://www.youtube.com/watch?v=ZfFL3vTABxcFairuza Balk was hugely influential for baby goths in the ‘90s in her role as the main antagonist of The Craft. Sassy, bitter, and a powerful witch, the character of Nancy popularized the look that combines goth and grunge, with dark lipstick, spiked chokers, oversized leather jackets, and plaid skirts, and inspired a generation of witchy outcasts. 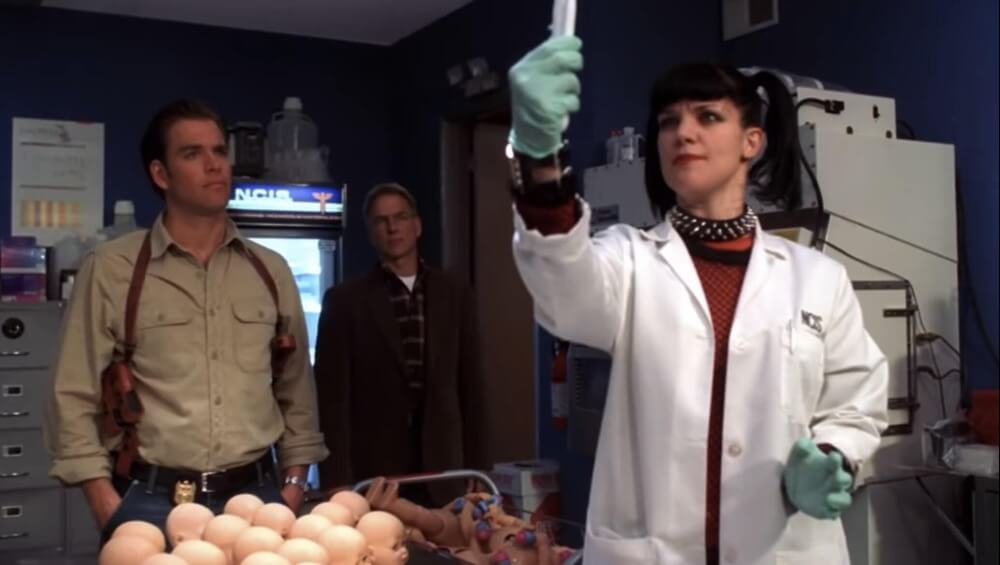 Photo Credit: Screengrab from YouTube https://www.youtube.com/watch?v=yZvWkM38KvwNCIS’s Abby perfectly embodied early ‘00s casual perky goth by combining spikes and skulls with pigtails and the occasional splash of color. Pauley Perrette played the forensic scientist whose bubbly personality and spooky looks made her one of the most popular actresses on primetime television until her departure from the show in 2018.

Rooney Mara brought an androgynous, cyber-goth sensibility, complete with piercings and a partially shaved head, to her breakout role in the 2011 thriller The Girl with the Dragon Tattoo, in which she played brilliant yet antisocial computer hacker Lisbeth Salander. In the subsequent film, The Girl in the Spider’s Web, the role of Salander was given to actress Claire Foy.

A post shared by What We Do in the Shadows (@theshadowsfx) 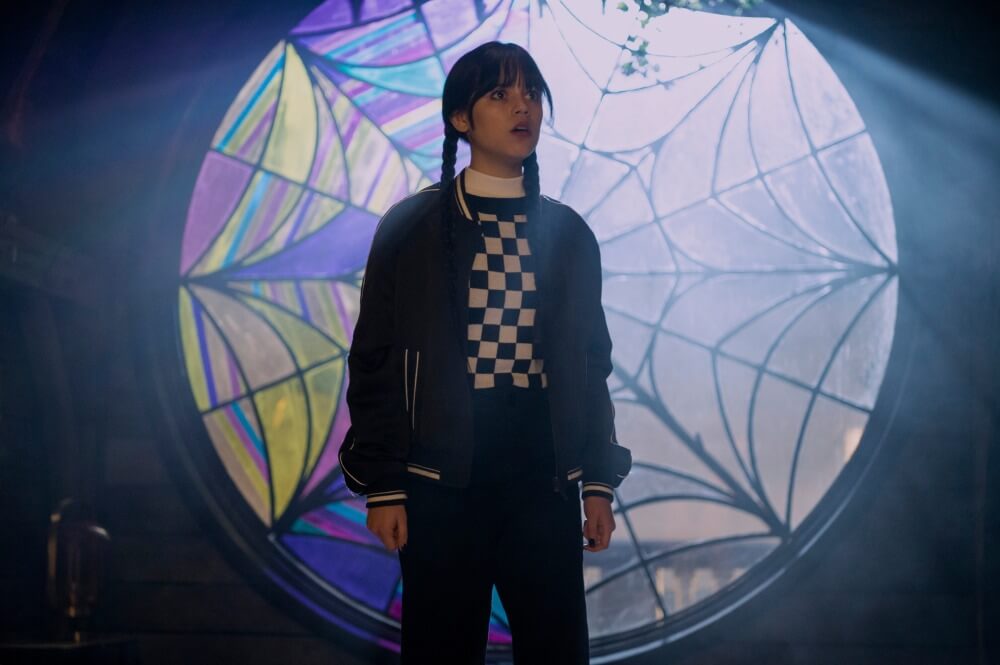 Photo Credit: VLAD CIOPLEA/NETFLIXThe Addams Family’s youngest daughter has been winning over audiences with her dry, morbid sense of humor since the ‘30s, but Jenna Ortega’s portrayal of Wednesday in the new Netflix original series puts a delightfully modern spin on the character. Though her fashion sense is much more aligned with contemporary goth trends, the latest iteration of Wednesday pays homage to black-and-fishnet clad icons of yore, such as the legendary Siouxsie Sioux, known for rocking over-the-top Cleopatra-esque eyeliner and black hair teased to the sky back in the ‘70s and ‘80s.

Film buffs and fashionistas alike have been suckers for a spooky queen for the greater part of the last century, and who can blame them? There’s no indication that Goth will ever go out of style – it’ll only continue to evolve, as evidenced by the wild popularity of Wednesday and the presence of ‘80s and ‘90s inspired dark fashion trends on our “For You” pages (Do the mini skirt and striped arm-warmer clad “E-girls” of TikTok count as Goth? Argue amongst yourselves!)