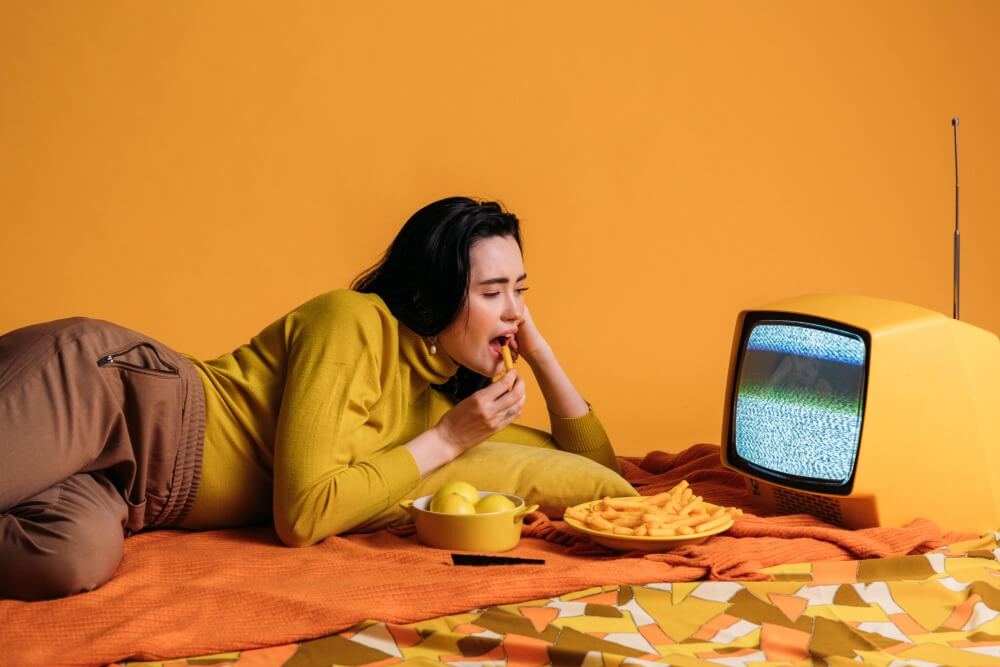 For most people, autumn is representative of change, whether that be with moving into a new place, transferring schools, or starting a new job. These changes, while positive, can be difficult sometimes. To make your transition into the new season (literally and figuratively) as comfortable as possible, we’ve compiled a list of cozy 90s TV episodes to give you that dose of nostalgic charm.

If you’re looking for a binge-able show to get you in a spooky mood, Buffy is a perfect pick. This teen vampire drama centers around 17-year-old Buffy, played by Sarah Michelle Prinze, who is the chosen slayer that’s tasked with clearing the world of the walking dead. From cheesy one-liners such as “I’m the thing that monsters have nightmares about. And right now, you and I are gonna show ‘em why.” to badass stage fights, Buffy’s an easy heroine to root for. Although her ultimate goal is to destroy the vampires, one not-so-evil bad boy has caught her attention. In episode seven of the first season, viewers get the first insight into the character arc of Angel (David Boreanaz), a once ruthless killer who has been cursed with having a soul, changing his perspective on evil versus good. This episode truly captures Buffy’s struggle between wanting to live her teenage life and fulfilling her responsibility as the slayer, making human problems seem much chiller in comparison.

Keri Russell plays the main character Felicity Porter in the hit show Felicity, centering on her move from her hometown to New York City following high school graduation. When it comes to a young adult coming of age, this show has it all: toiled romance, self-discovery, and a dramatic haircut. Potentially the most talked about episode of the decade, episode two of the second season of Felicity is a big mood. When her boyfriend, Ben (Scott Speedman), starts acting cold and aloof, Felicity consults advice from a magazine column on how to win him back. After determining he’s pulling away as a result of commitment fear, she decides to focus on her own needs and cut the relationship off. Then, like all bad bitches who feel boxed in, she chops off her hair to signify a new beginning. This episode was a huge shock to viewers, as women cutting their hair short was not a widely accepted norm at the time. The actress received a ton of negative feedback including actual death threats, but nevertheless, she has been openly proud of the moment since the start. The fierce feminist moment inspires major validation to anyone who’s the thralls of a big change.

Sabrina the Teenage Witch was a high school favorite among many young witches due to the quick wit and loveable awkwardness of the main character Sabrina, played by Melissa Joan Hart. In this episode, Sabrina is falling behind in her creative writing class so her aunts Hilda (Caroline Rhea) and Zelda (Beth Broderick) suggest she tap into the poetic side of the writing experience by using an old-school typewriter for inspiration. What she doesn’t realize is this typewriter has magical abilities to turn her characters into reality.  Soon enough, these characters cause chaos throughout the school, requiring her and her aunts to band together to destroy the vivid characters she’s brought to life.

In many ways, the season of autumn is representative of change: changing seasons, starting school, and turning over a new leaf. This episode of Dawson’s Creek is as wonderfully dramatic as it is packed with talk of big, life-altering changes. When Pacey’s on-again-off-again girlfriend Andie (Meredith McPhee) has a sudden appearance from her absent father, they face their relationship’s biggest conflict. Andie’s dad, played by David Coleman Duke, has shown up to take her away from the Creek. When it seems she’s going to have to leave after all, Pacey takes her to their spot at the docks for one last dance before she leaves. Between the parental versus child angst and the forbidden teen romance, your fall angst cup is sure to overflow.

Okay, so first off, the title of this first episode alone is enough to make you want to break out the cinnamon-scented broomsticks and light a circle of white candles. Following the death of their grandmother, the sisters gather at the home they’ve inherited. The Victorian-style home sits on a small hill covered in fallen leaves, giving strong autumn vibes and instantly transports you to this witchy world. While exploring their new crib, they come upon the Book of Shadows stowed away in the home’s attic. Upon reading the first page aloud, each woman unlocks their own unique magical ability and harnesses the powers passed down to them through generations of witches. After this first episode, you’ll be chopping your hair into a bob, donning black satin dresses, and summoning spirits all day long.

The short-lived but much-adored creation of My So-Called Life hit us with another great pilot episode from the decade of flannel shirts and baggy pants. In this first episode, we’re introduced to the main character Angela Chase, played by Claire Danes, who is in the thralls of teenagehood. We watch her dye her hair red, pull away from childhood friends, act out in class, and start hanging with the interesting but troubled Rayanne Graff (A.J. Langer). By the end of this first look into Angela’s life, you’ll be breaking out the overalls, choker necklaces, and Doc Martens.

Halloween spook is the perfect compliment to a heaping dose of '90s teenage nostalgia. This episode begins with main character Lisa, played by Lark Voorhies, winning a radio contest for a weekend getaway at a murder mystery party. Things take a turn when people start disappearing throughout the giant mansion they’re all stuck in. This episode gives major Clue vibes for a surprisingly spooky and fun watch.

Needless to say, Friends is a go-to watch when you’re in the mood for some '90s nostalgia. There are a handful of great episodes to binge to get you into the fall mindset, from season four’s Thanksgiving episode to season two’s football in the park mishap. In “The One With Monica’s Boots”, Monica perfectly encapsulates the determined frustration over buying a pair of adorable new boots that turn out to be wickedly uncomfortable.

As a girl from Wisconsin myself, there are few shows that perfectly represent the bored angst of midwestern fall as well as That '70s Show has. In this particular episode, the crew takes to climbing onto and vandalizing a water tower to kill time when Kelso (Ashton Kutcher) takes a dive off the edge, starting off a running gag throughout the show. Later in the episode, Eric (Topher Grace) walks in on his parents having sex and is completely traumatized. He unexpectedly receives comfort from his snobby older sister as a perfect representation of siblings being there for each other through the weird and the gross no matter how old they get. Fall feels come in hot with this episode with the back-to-school angst, brown-toned sweaters, and a carefree teenager mentality.

Episode seven of the second season of Boy Meets World is a great representation of what can go wrong when rumors aren’t shut down in high school. When working on a class project surrounding the idea of love and sex, Topanga (Danielle Fishel) and Cory (Ben Savage) accidentally fall asleep at school while finishing their documentary. Word gets out, and Cory is hailed as a god for sealing a deal that never actually happened. Noticing how much praise he gets from his peers, Cory goes along with the lie and claims that he and Topanga did indeed sleep together. Topanga’s disappointed and hurt by his lies in a deep way, giving the audience a great example of the hurt that can be caused by a friend’s actions. Slightly dramatic, majorly sweet, and a whole lot of adolescent angst make this a wonderful fall watch.

Top photo by KoolShooters on Pexels