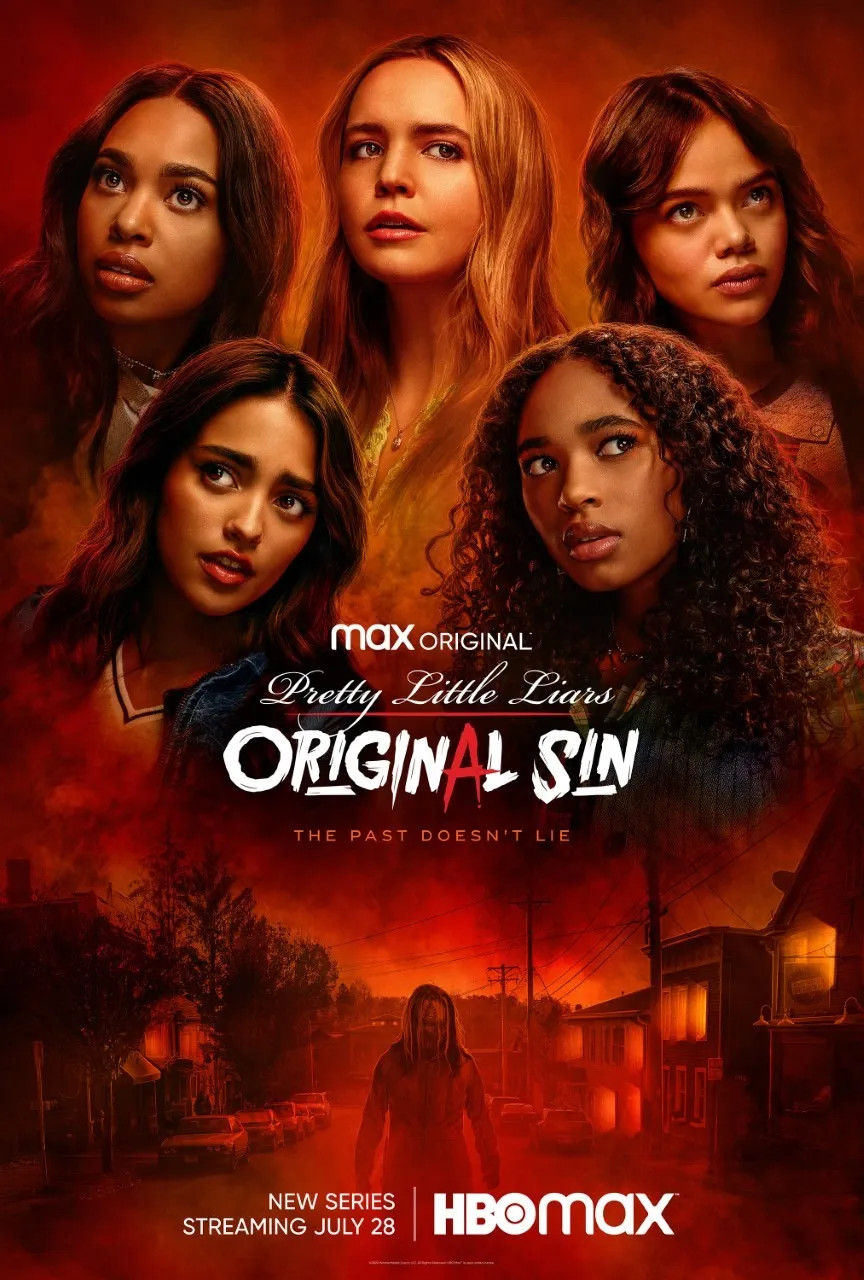 On June 8, 2010, Pretty Little Liars premiered on ABC Family. It featured 4 teens, Aria, Emily, Hanna and Spencer, being stalked by an anonymous figure going by “A”, who appeared after their 5th member, Alison, mysteriously disappears. The show ran for 7 seasons and spun off into 3 series based on the characters and plots of PLL. Most recently, HBO announced that Pretty Little Liars: Original Sin will be launching on the streaming platform on July 28. Original Sin will feature a new generation of liars growing up in a new Pennsylvania town, trading out the fictional Rosewood for a real-life coal town. So, how is it tied into the PLL universe with no original characters and a different location? The original series’ notorious villain A is back, and has set their sights on a group of 5 high schoolers. Fans of the original series and new viewers alike are gearing for the 28th by brushing up on their Rosewood lore and grabbing their black hoodies out of storage. As we rewatch, we’re reminded of all of the moments in the original series that have not withstood the test of time. Before you sit down for your marathon viewing, here are 5 times that Pretty Little Liars was problematic as hell. Huge spoilers ahead.

In the first episode, Aria, another one of the protagonists, meets a mysterious man named Ezra in a bar and hooks up with him in the bathroom. The next day, in a turn of events, it’s revealed he is her new high school English teacher. They go on to date off and on for 7 seasons and even get married, despite the fact that they met when he was 25 and she was 16. As you would imagine, Aria’s parents condemned this relationship. They had been sneaking around for a few seasons before her parents uncovered their relationship, letting the audience fall in love with them together before a reasonable adult could point out what a remarkable creep Ezra was. It’s been proven again and again that nothing is hotter to a young adult audience than misunderstood love finding its way in a disapproving world. This is where maybe the biggest issue comes in; the audience (primarily made up of teenage girls) was rooting for them and hated her parents for not understanding their passionate, forbidden love story. Ezra was not a sex symbol, he was a sex criminal. Ezra also secretly dated Aria’s missing friend Alison before her disappearance and was surveilling Aria because he was writing a book about her without her knowing, meaning that he knew exactly who (and how old) she was when they met in that bar. He continues surveilling her and her friends throughout their on and off relationship, and somehow gets forgiven when Aria finds his hidden cameras. When your audience lands in such an impressionable demographic, you have a responsibility to not display student-teacher love as the highest and most natural form of intimacy.

This trope refers to the practice of killing off queer characters in media at much higher rates than their straight counterparts. When creators view their queer characters as expendable, the surviving characters reflect that value. Although there have been an almost equal amount of deaths between queer and straight characters on PLL, this is remarkably skewed when you realize how many fewer queer than straight characters the series had at any given time. Emily, one of the core group of friends that the show centers around, is a lesbian whose girlfriends tend to meet gruesome ends. Her first girlfriend we met, Maya, and one of her last partners, Sara Harvey, were both brutally murdered. Shana Fring, an old fling of Emily’s girlfriend Paige, met a similar end. And Charlotte Drake? Well, she deserves her own bullet point.

3. The Only Non-Cis Character Is Literally "A"

Yikes. During what appeared to be a mad shuffle to find “big A,” it was revealed that the formerly missing Alison DiLaurentis had a sibling that she and the audience didn’t know about: a trans woman named Charlotte Drake, who we had met while claiming to not be related to the DiLaurentis family and going by CeCe. Alison met CeCe when she was dating Jason, Ali’s brother. We later learned that this made Jason her brother as well, but the creators never seemed to find time to contend with that detail. The reveal that A was trans would sit very differently if the show had other trans characters, but Charlotte was the first and last one they introduced. Because there is a dangerous idea that trans people are deceptive, it was a harmful and really loaded choice on the part of the creators to make one of the greatest villains, the ultimate “A,” the master of deception who had lived to fool the protagonists for 7 seasons, a trans woman. Although this choice was likely not deliberate and malicious transphobia, the harm of affirming a stereotype like this on a show that was reaching so many young people is huge.

Hanna, another one of the liars, struggles with insecurities about her weight in flashbacks to when Alison was in Rosewood. Alison, notorious for being a mean girl to even her closest friends, makes constant comments on Hanna’s weight and gives her the nickname“Hefty Hanna.” Ali encourages Hanna to binge and purge, leading her to develop bulimia. We never really see her recover from it, it just appears to make her more conventionally attractive and then go away. The National Association of Anorexia Nervosa and Associated Disorders, or ANAD, states on their website that “35-57% of adolescent girls engage in crash dieting, fasting, self-induced vomiting, diet pills, or laxatives”. When your target demographic is the same group most likely to suffer from disordered eating, it’s unwise to represent purging as a way to lose weight without any real consequences.

After years of bullying, manipulating, ruining the lives of, and actually blinding anyone who crossed her path (not to mention faking her death and opening her friends up to the wrath of “A”), she comes back and eventually most people are just okay with her. From an audience perspective, it was hard to believe that she had truly changed and been redeemed, mostly because she only appeared to be sorry towards people she needed something from. The writers portrayed her evil to run so deep, so far beyond the typical high school mean girl, that her redemption would have required really radical change and true regret, which we just didn’t see after her return. The holdouts, including Jenna who was blinded by a “prank” pulled off by Alison before she went missing, are demonized. After she returns, Ali asks her friends to lay their lives on the line for her again and again and they do it without question. What message does this send to viewers whose love maps are in the middle of developing? Forgiveness is a good thing, but demonizing a character for holding a grudge against the person who blinded them is not. This show had a bizarre attitude towards boundaries at every turn.

So, what does this mean for the impending premiere of Original Sin? The streaming series has huge shoes to fill, spinning off a cult classic with a fanbase that has stayed loyal even since the show went off the air in 2017. Because the original series had so many habits that sit extremely poorly with your average 2022 viewer, Original Sin faces the challenge of finding a new, more conscientious tone while staying true to the lovable campiness of the 2010 series. Check out the first two episodes on July 28, only on HBO.