The Freeform Network Scores Big With Simone Finch's New Series "Single Drunk Female," A Show Focused On Starting Over And Getting Sober 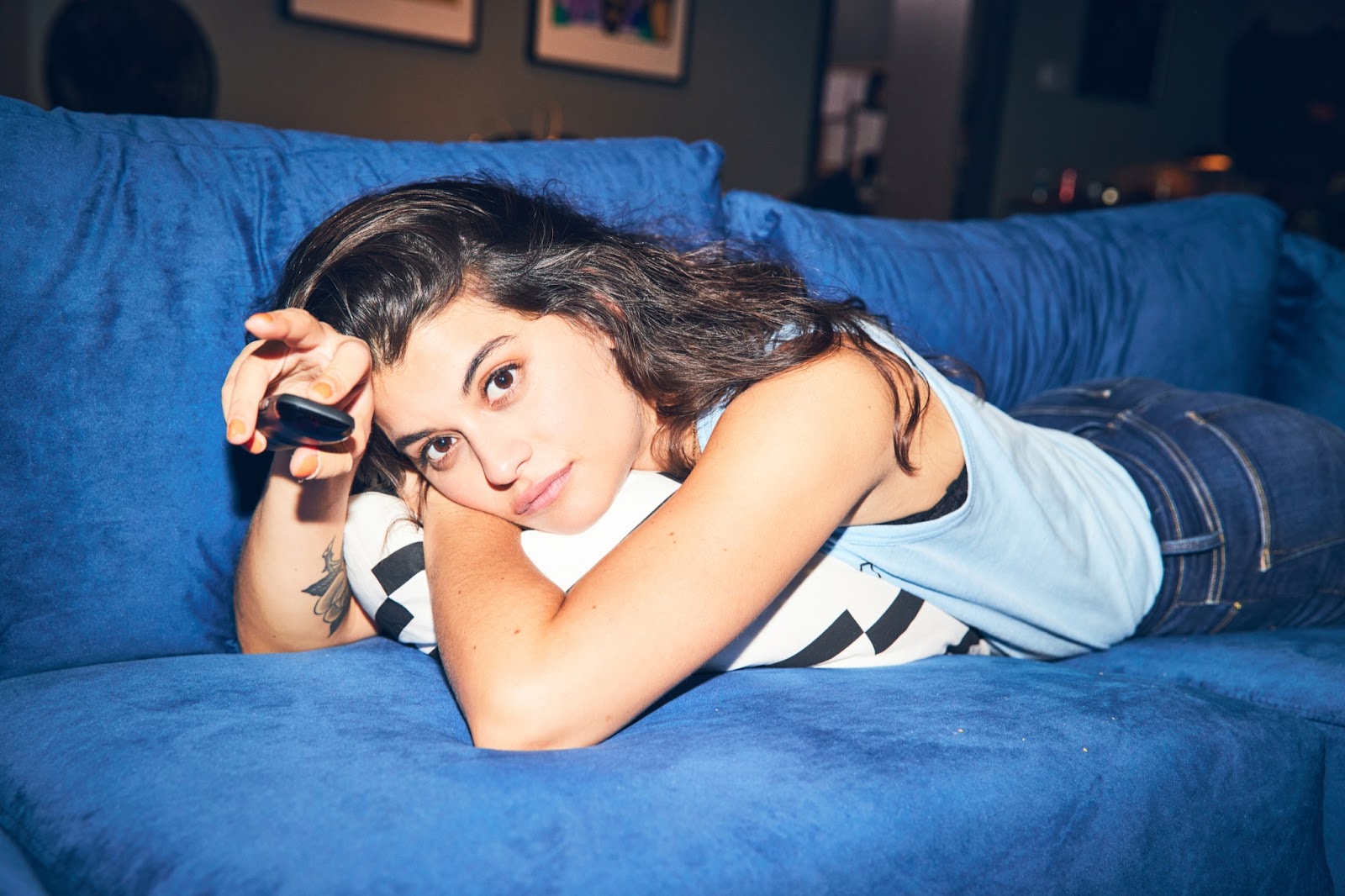 Single Drunk Female, Freeform’s new television series about sobriety written by Simone Finch (The Connors, Homeland) starring Sofia Black D’Elia (Your Honor, The Mick) stars D’Elia as a 20-something irreverent drunk named Samantha Fink, who is clueless to the feelings of others, and out of touch with her own. We quickly learn that much of this dissociation is a result of her unchecked alcoholism, along with a tenuous relationship with her overbearing mother, and unresolved grief surrounding her dad’s death from cancer. Did we mention that her ex-best friend Brit (Sasha Campere) is also marrying her ex-boyfriend Joel (Charlie Hall)? Yeah, that too. We learn all of this pretty early on, as Finch begins to peel back the layers of Samantha’s journey into sobriety. 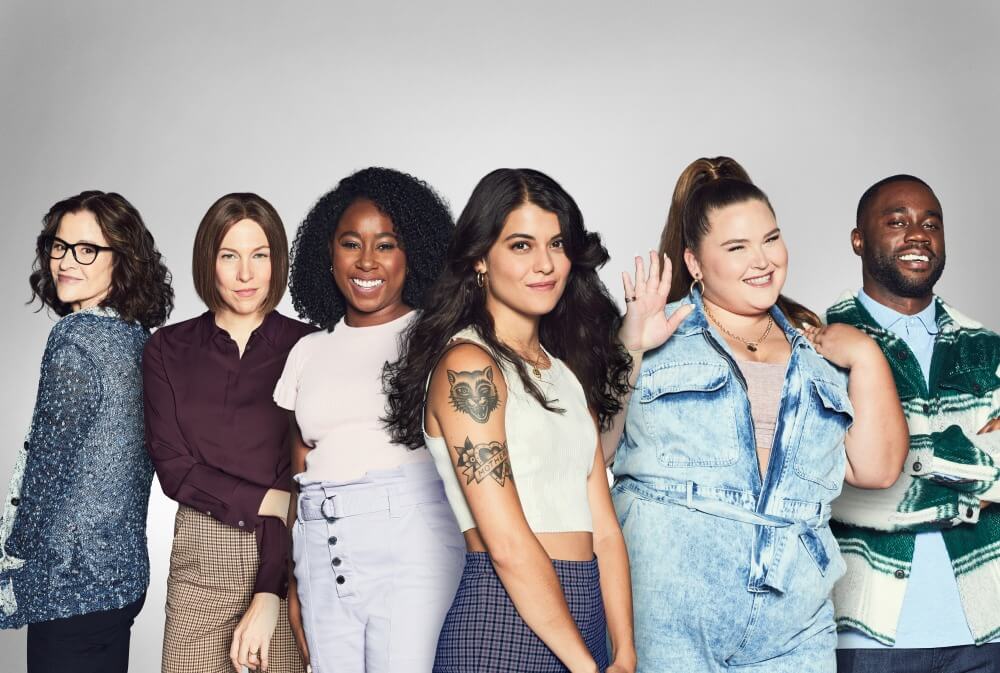 The series, which is being labeled a dramedy, premiered January 20th on Freeform. In the season opener we meet a young raven haired Sam, as she plods down the glass filled corridors of her New York City high rise office, that could easily be any media company (think Mashable or Vox), taking swigs of vodka from her water bottle as she saunters in to her meeting, slamming her body into the door to open it. Sam greets her boss Nathaniel, played by the hilarious John Glaser (Hustler’s, Bob’s Burgers) with a firm “what’s up?” and mentions how unprofessional everyone is for being late.

She's quickly informed that the meeting actually ended ten minutes ago; which sends her into a tirade of who is jealous of her, who has it out for her, and what the patriarchy is doing. Sam is quickly silenced when her boss states the obvious: “you're drunk.”

Instead of taking responsibility, she tries to avoid it and winds up getting into a highly comical, yet cringy, scuffle with him over a phone, resulting in Sam assaulting her now-former boss, a move that of course, gets her into legal trouble. 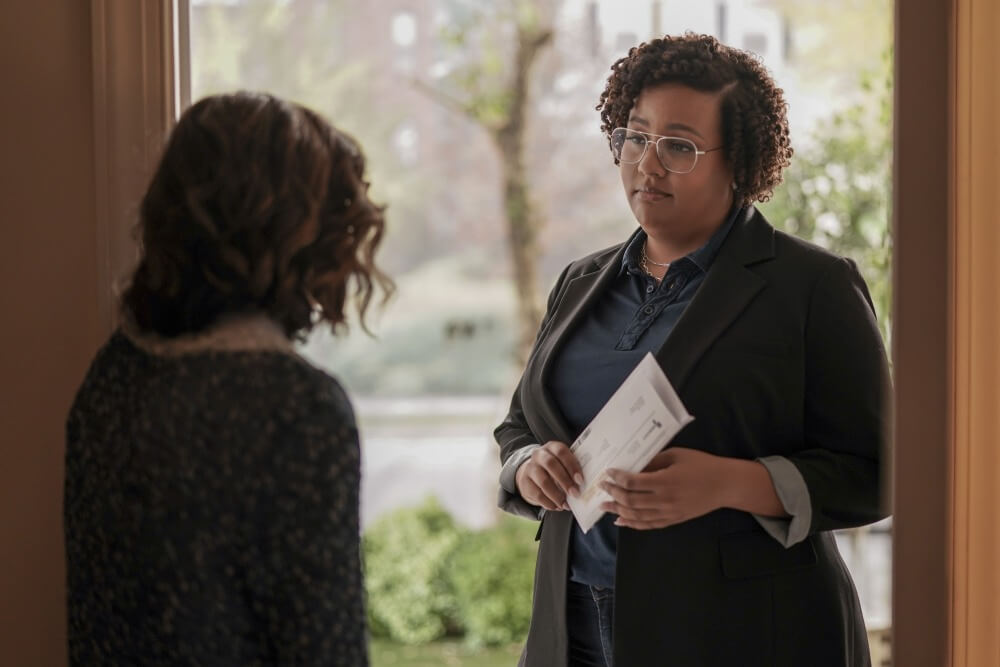 Suddenly, Sam's most pressing issue is avoiding jail time, which she seems to serendipitously sidestep a few times. A feat her snarky probation officer Gail (Madison Shepard) likes to remind her of. The most reasonable choice for Sam to rebuild her life, is to ditch her delusions of grandeur, and return back home to her “smother” Carol, played brilliantly by 80’s icon Ally Sheedy (The Breakfast Club, X Men Apocalypse).

You’d think that losing your New York City writing job and returning home to live, would be enough to springboard one into a life of sobriety or for a dramatic teaching moment about the pitfalls of alcoholism, like in the tumultuous loop of addiction displayed in Lady Gaga’s rendition of A Star is Born.  However, Finch’s new series, which draws upon her own struggle with addiction, takes a deeper look at the succession of events that cause those suffering with addiction to end up where they are; and what it’s like to climb their way out.

In a Television Critics Association Panel (TCA) Finch  talked about how the series was ten years in the making. “I started writing this in 2012 before I got sober. I got sober and I realized it was about a girl getting sober,” said Finch in an interview with Deadline, who is now seven years and eight months sober, adding, “I called it a living script as it sort of evolved as I got more sober.

Finch also shared that she wanted the series to be about sobriety. Some of the tenets of Alcoholics Anonymous are rooted in altruistic pursuits like responsibility, awareness, and discipline. For those of us not indoctrinated into the twelve step culture, Sam’s sobriety may look alot like trying to cope in a world that is concerned about its bottom line, and not necessarily your feelings. Or just adulting. At times I found Finch’s need to dramatize normalcy somewhat predictable until around the eighth episode, when Sam's love interest James, (Garrick Bernard) unexpectedly relapses, along with a few other surprises. But that's sobriety, and Finch shows it well. The show succeeds most at amplifying normalcy and with the strong depictions of community most of us are looking for. By the sixth episode, you not only find Sam's metamorphosis endearing, but begin to question your own relationship with alcohol. For a moment, I know I did. 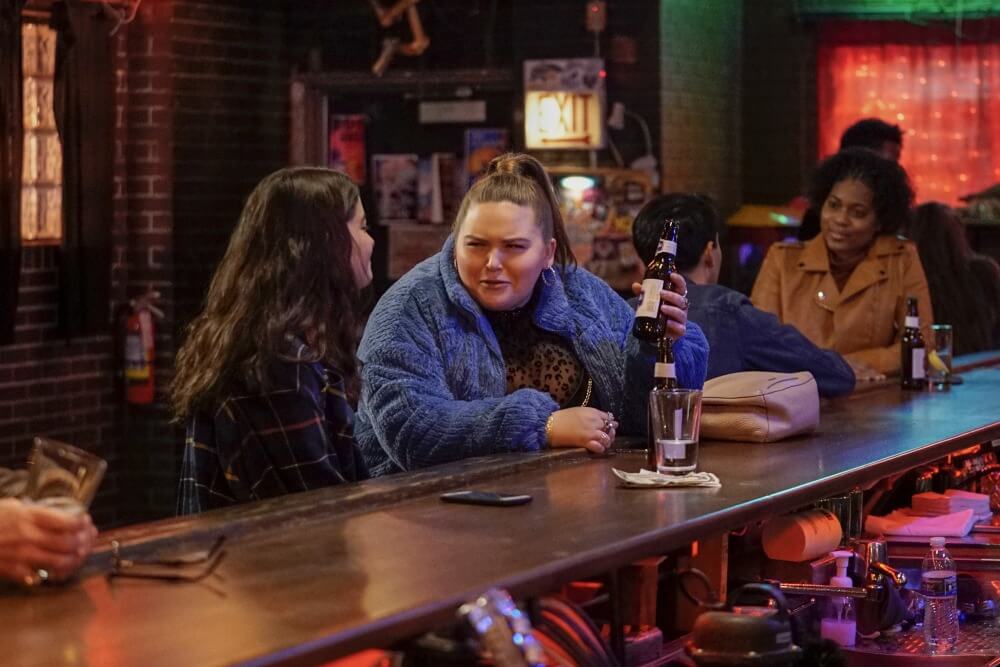 Pulling it together and adulting for her own good isn't the easiest thing for Samantha to do. She has to payback Brit for the damage she caused to her wedding van although she's penniless. She has to apologize for taking her other bestie Felicia (Lily Mae Harrington) for granted, and tossing her into the drinking buddy category, instead of true BFF. Which is a no-no.At least she doesn't need to forge her journey to becoming a good person alone. Her biggest supporter is found by way of her wry, and overachieving sponsor Olivia (Rebecca Henderson,) and her long suffering wife Stephanie (Madeline Wise). 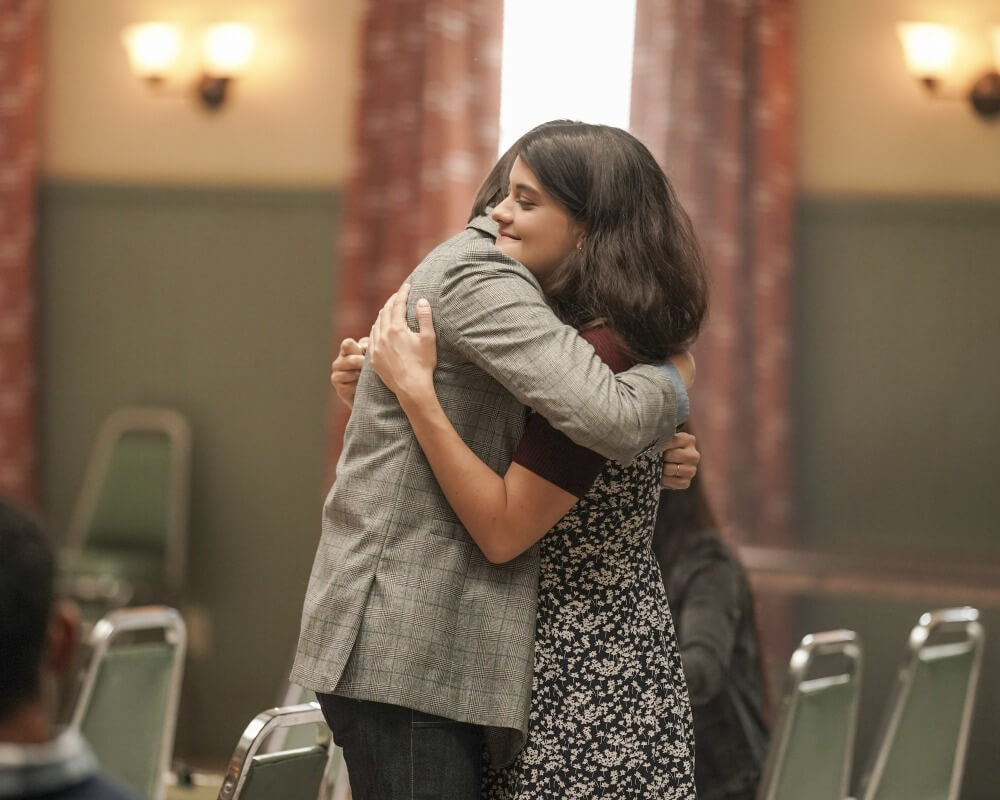 Throughout each episode Olivia seems to magically appear at all times--especially when Sam needs her the most. Sobriety calls for her to walk away from triggering circumstances, humbling herself while working in retail, paying her debts and making amends.

This series is timely, especially in the age of COVID-19 when so many people are rethinking their drinking habits and also looking to get sober. Watching Sam’s transformation over her year of sobriety, is inspiring. The bigger lesson centered around showing up as your authentic self, and finding love in all the right places. 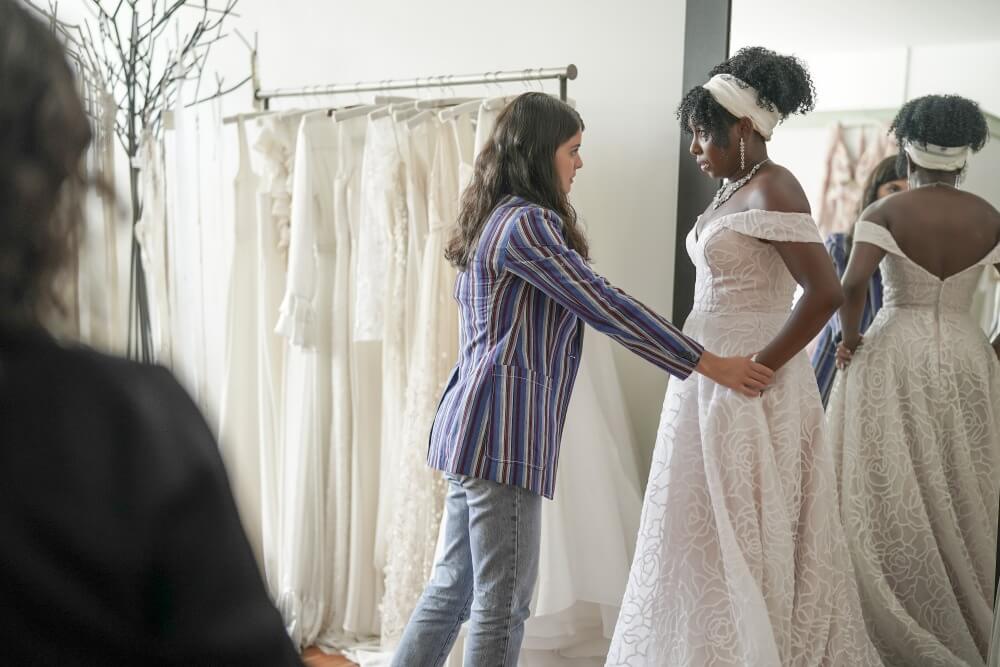 Sam isn’t the most likable character at times, but fans will be drawn to her humanity and vulnerability.  Viewers will have to tune in to see if she has the courage to stay on track and work her program. Although Single Drunk Female didn’t chronicle the darker sides of addiction, it did a good job of capturing all the feel goods of friendship and starting over. The only drawback is that it wrapped up things a little too neatly. For instance, Sam quickly recovers her friendship with ex-bff Brit (which was a big forgive), successfully sidesteps her triggers, and becomes the home team favorite all before the credits roll. This is the stuff Hollywood thrives on– but it felt a bit too quick for me.

Overall, I couldn’t stop watching because the writing is hilarious. Each episode is filled with beautifully flawed characters that will have you laughing and crying at the same time.

This one is definitely binge worthy.

Tags: Simone Finch , Free Form network , Single Drunk Female , getting sober , Sobriety , Black D'Elia , Ally Sheedy , Alcoholism , tv shows
Support Feminist Media!
During these troubling political times, independent feminist media is more vital than ever. If our bold, uncensored reporting on women’s issues is important to you, please consider making a donation of $5, $25, $50, or whatever you can afford, to protect and sustain BUST.com.
Thanks so much—we can’t spell BUST without U.