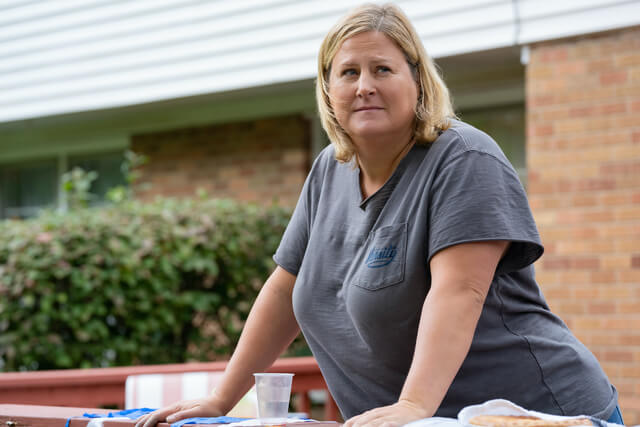 Stand up comedian Bridget Everett might not be the first person you’d think to cast as the lead in a low-key, emotionally charged dramedy, but it’s clear the writers (Hannah Bos of HBO’s High Maintenance and Paul Thureen of Driveways) could have had no one else in mind when they created Somebody Somewhere. The 7-episode HBO series debuts this Sunday, January 16th.

Everett—best known for her bawdy stand-up performances featuring numbers like “Pull them Up (Tittles)” and “What I Gotta Do (To Get That Dick in My Mouth)”—was a regular on the series Inside with Amy Schumer, and starred as Barb in the 2017 movie Patti Cake$, along with small parts in other films. She’s also frequently a hit on the late-night circuit.

In Somebody Somewhere, she plays Sam Miller, a woman who, reeling from the recent death of her sister, finds herself back in the midwestern town of Manhattan, Kansas, where she grew up, and where she is surrounded by all the same family drama and dysfunction of her childhood. (Everett herself hails from Manhattan, Kansas, and the show is semi-autobiographical). Sam seems trapped and alone, and even exhibits a measure of that most un-Bridget-Everett-like quality: insecurity. She’s emotionally raw, breaking down in tears while scoring SAT essays in her cold, fluorescent-lit workplace.

But when she reconnects with Joel, an old schoolmate (brilliantly played by Jeff Hiller), who confesses to having been in awe of her back in the day, it lights a spark. In the first episode, directed by Jay Duplass, the two bond over their disdain for a fellow classmate who has just written and self-published a book (hilariously titled Showgirls), that threatens to tell all about their most embarrassing high school years, when they were both in the school choir. And when Joel invites her to an event he organizes at a local church (located in that depressing, modern symbol of American decay, the abandoned shopping mall), she takes a risk and shows up. 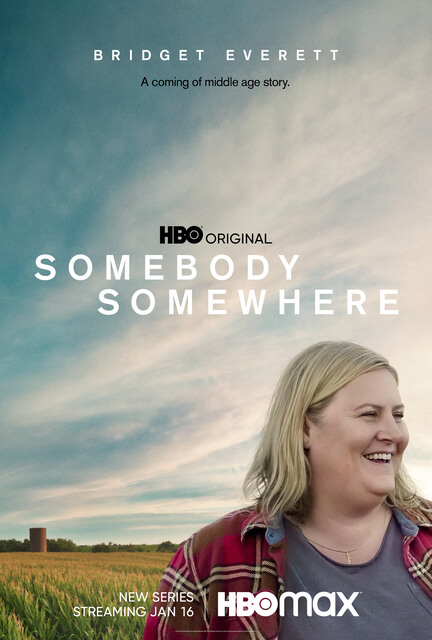 There she is introduced to an assortment of people who stray far afield from the typical idea of a “Midwestern type”—although that may be more of a surprise for those of us watching from the coasts who are utterly unfamiliar with life in the region than it will be for anyone who actually grew up there. Even NYC’s own downtown performance-scene regular Murray Hill is there. (“I like to perform in Manhattan, NYC, and here in Manhattan, Kansas. Two Manhattans. Just like what I had for breakfast this morning!”, he quips.) It’s a neon-lit escape from the drab plains of her life; more nightclub than church. Filled with a community of diverse, creative, non-mainstream folks, it promises to offer Sam some sort of rebirth. 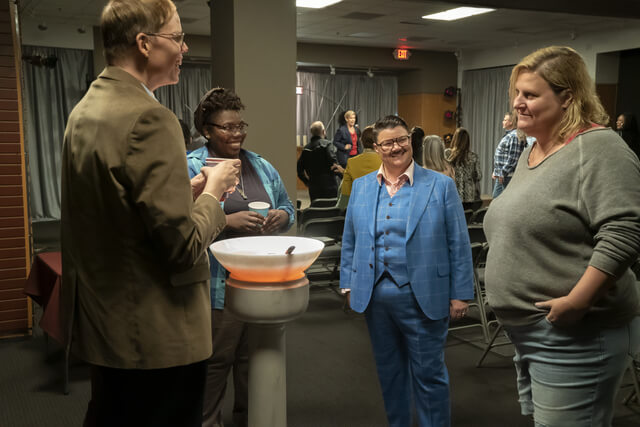 Somebody Somewhere is by turns funny and poignant, and will make viewers reconsider not only their stereotyped notion about life in a small midwestern town, but also their preconceived ideas about Everett’s range as a performer. She’s the kind of person you just can’t take your eyes off of, and Somebody Somewhere is poised to—finally—turn her into a really huge star.

Tags: Bridget Everett , Something Somewhere , Murray Hill , Jeff Hiller , Kansas , Midwest , Jay Duplass , HBO , HBOMax
Support Feminist Media!
During these troubling political times, independent feminist media is more vital than ever. If our bold, uncensored reporting on women’s issues is important to you, please consider making a donation of $5, $25, $50, or whatever you can afford, to protect and sustain BUST.com.
Thanks so much—we can’t spell BUST without U.