Sex And The City's Spinoff Raises the Question: "Where Are All The Other Shows About Middle-Aged Women?" 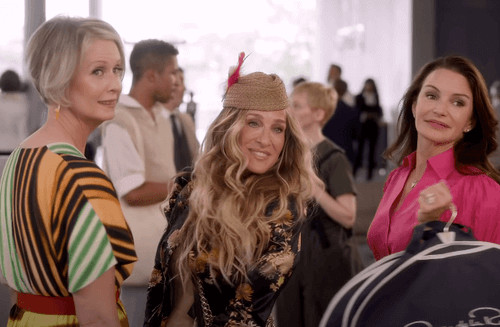 Sex and the City is returning to TV screens, so pull out your stilettos and mix up some martinis. In a teaser trailer released last week, HBO Max announced that the show’s new spinoff, And Just Like That…, will premiere its first two episodes on December 9.

The 10-episode series will reunite us with Manhattan’s most fabulous friends: Carrie, Charlotte, and Miranda (alas, minus Kim Cattrall as Samantha). We’ll also be introduced to a new friend, Lisa Wexley, played by Nicole Ari Parker, who is one of four women of color joining the series. Picking up 17 years after the original series ended, And Just Like That… will find the ladies navigating love, loss, and, of course, fashion – this time, in their 50s.

Given Hollywood’s tendency to sideline stories of middle-aged or, god forbid, senior women, And Just Like That… feels like a major breakthrough for the representation of older women on screen. In the trailer alone, we see our protagonists sporting some very funky outfits, living it up at a concert, boozin’ at brunch and, simply put, having lives!? Turns out, middle-aged women are capable of fun!

But off screen, the misogynistic cracks are already showing. In a Vogue interview earlier this month, Sarah Jessica Parker revealed that she and co-stars Cynthia Nixon and Kristin Davis have already received criticism about their looks in the reboot series...simply because they’ve gotten older.

In the original series, our protagonists were in the TV industry “sweet spot” of their mid-30s: old enough to have “serious” storylines but still young enough to be flirty and wild. Studies have shown that female television characters are consistently portrayed as younger than their male counterparts. In fact, one analysis of 2014-2015 TV shows found that most female characters were in their 20s and 30s (60%), whereas male characters tended to be in their 30s and 40s (55%).

If you’re a woman aged 50 or up, you can really kiss screen time goodbye. The Ageless Test study, released last year by the Geena Davis Institute on Gender in Media, analyzed 2019’s top-grossing films from the U.S., U.K., France, and Germany to investigate the types of roles that exist for women 50 and older.

To meet the study’s criteria for “meaningful” representation, a film had to have at least one female character over 50 who was integral enough to the plot that her removal would have noticeable effects. This character also had to be presented in humanizing ways and not be based upon age-related stereotypes. The results, as you can probably imagine, were...not great.

The study also found that among all characters over age 50, 75% were male and only 25% were female. As Parker so perfectly put it, “I'm sitting with Andy Cohen, and he has a full head of gray hair, and he's exquisite. Why is it OK for him? I don't know what to tell you people!”

The criticism Parker has already received for daring to have aged is not only disrespectful to the queen of fictional NYC, Carrie Bradshaw, but reflective of a bias running so much deeper than Sex and the City. Besides showing an obvious double standard between portrayals of men and women, Parker’s experience of ageism is symptomatic of the way our entire culture devalues women above a certain (40ish) age.

By failing to show older women on screen, the entertainment industry tells us that they don’t matter. It’s difficult to feel empowered or accepted if you can’t see yourself in the media you consume. Women over 50 make up 20% of the U.S. population yet are only given 8% of total screen time. It’s as if, once your youthful looks are gone, you become totally disposable.

In fact, many other female stars have been vocal about the poor treatment of “older” women in the industry.

“I feel physically incredible. So it's weird that it's all of a sudden getting telegraphed in a way that's like, ‘You look amazing for your age,’” Jennifer Aniston told InStyle. “I think we need to establish some etiquette around that dialogue and verbiage."

Meanwhile, in a 2015 interview, Maggie Gyllenhaal revealed she was deemed “too old” to play the love interest of a 55-year-old actor, despite being only 37 at the time of the production.

This lack of representation is even more pronounced for women of color. Black girls and women are 6.5% of the US population but, as the Geena Davis Institute found, they’ve comprised only 3.7% of lead roles in the 100 top-grossing films of the last decade.

Kristin Davis, like Parker, expressed her frustration with the SATC reboot’s critics.

“People are like, ‘Why should they come back?’ and it really bugs me,” she said in Bustle.  “For me that is so indicative of our reluctance to sit and watch women’s lives develop over time.”

As Nixon explains it, the spinoff is not here to accommodate Hollywood’s ageism: “We’re not including, like, a 21-year-old niece,” she told Bustle. “I think it’s revolutionary to do a show about middle-aged women, with their aging lady bodies.” That just might be the best path forward: sticking it to the industry by showing gray-haired women no holds barred, living their best lives without age as a character trait.

Check out the And Just Like That... teaser below, and make sure to tune into HBO Max on December 9 for the first two episodes!

Tags: Sex and the City , And Just Like That... , Sarah Jessica Parker , Cynthia Nixon , Kristin Davis , ageism , sexism , nicole ari parker
Support Feminist Media!
During these troubling political times, independent feminist media is more vital than ever. If our bold, uncensored reporting on women’s issues is important to you, please consider making a donation of $5, $25, $50, or whatever you can afford, to protect and sustain BUST.com.
Thanks so much—we can’t spell BUST without U.