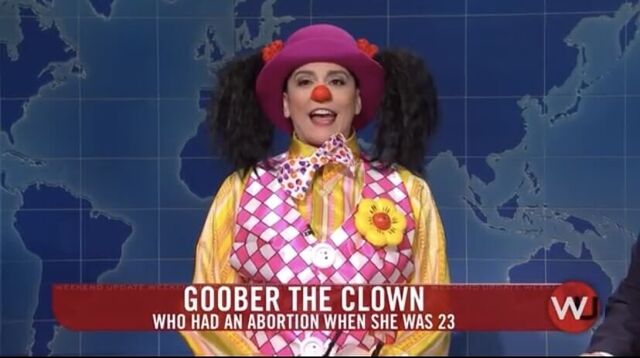 On Saturday night, Cecily strong slammed the recent ban on abortions in Texas in a sketch for Saturday Night Live’s “Weekend Update” dressed as “Goober the Clown.” She used the sketch to give a powerful speech about abortion by revealing that Goober had an abortion the day before her 23rd birthday.  “I really don’t [want to talk about abortions]," Goober says, but she feels compelled to because “people keep bringing it up.” Noticing that abortion is a “rough subject,” Goober tells the host, Colin Jost, “we’re going to do fun clown stuff to make it more palatable” as her bow tie spins round in a circle.

Never diverging from her clown persona, Goober made balloon animals to bring a humorous take on her delivery. “I wish I didn’t have to do this because my abortion at 23 is my own personal clown business. But that’s all some people in this country wanna discuss all the time even though clown abortion was legalized in Clown v. Wade in 1973!”

Strong’s approach towards the difficult subject is careful yet raw as she alludes to real-life events through her clown persona. The “Clown v. Wade” discussion that Goober mentions refers to the 1973 Roe v. Wade Act in which the court ruled the protection of a person’s liberty to choose whether to have an abortion in the US. This act has long appeared in abortion discussions since it passed in 1973, and Goober playfully reveals how tiresome it is for people to fight for their right to have an abortion.

“Did you know that one in three clowns will have an abortion in her lifetime?” she asks Jost.

“You don’t, because they don’t tell you. They don’t even know how to talk to other clowns about it, because when they do talk about it, if you were a clown who wasn’t the victim of something sad like clown-cest, they think your clown abortion wasn’t a ‘righteous clown abortion,’” Strong says, continuing to discuss serious facts about abortion through her fun-loving clown persona.

At one point Jost neglects the clown character by saying “You don’t have to do this Cecily.” To which Strong quickly recovers her character by replying, “Who’s Cecily? I’m Goober!” The slip in persona suggests that this sketch is perhaps autobiographical of Strong’s own experiences with abortion as Jost senses how difficult it may be for Strong to talk about the sensitive topic. Thus, fans have saluted Strong for delivering information about abortions in such a personal way.

Laughing through the pain of the difficult subject, Goober reminds the audience to keep laughing, saying: “Laugh! I need it! I need you to laugh so hard, like the way I laughed when the doctor asked if I got pregnant on my way over to the clinic because I wasn’t very far along.” Explaining her love for the joke, Goober says: “Not like a funny-haha joke, but like, in a funny, you’re not an awful person and your life isn’t over joke. A-honka honka!”

“And in the waiting room, they had a little guest book where all the clowns could write their clown abortion story for the next clown to read it so she wouldn’t feel so alone. AWOOGA!” Goober adds.

“And then years later you’ll be at a dinner with a big group of clowns and one clown will go out on a limb and say she’s had an abortion and then like eight other clowns say they’ve had an abortion too because that’s how common it is. And then everyone’s excited and relieved to be talking about it, that it’s like WOW, we kept this secret for so long despite being so grateful it happened.” Strong uses her clown discourse to reveal that many people have abortions and that they have them for important reasons.

In response, Jost asks, “So wait, are clowns really women?”

“Excuse me,” Goober replies. “Wow ok, Colin Jost thinks women are clowns, cool.” Her response sends the audience into fits of laughter as Goober dodges the revelation of her clown metaphor.

Strong uses her humorous irony to remind viewers that abortion is not a laughing matter, and that the court in charge of the Texan laws on abortion need to realize this. She also uses laughter to overcome the pain of such a sensitive topic.

Goober continues with her abortion narrative, telling Jost that she wants to “speak [her] truth” after inhaling helium from a balloon:  “I know I wouldn’t be a clown on TV here today if it weren’t for the abortion I had the day before my 23rd birthday.”

“Clowns have been helping each other end their pregnancies since the caves. It’s going to happen so it ought to be safe, legal and accessible. Not back to the alley. The last thing anyone wants is a bunch of dead clowns in a dark alley.”

Strong has received a plethora of support from fans who are grateful to the comedian for so carefully speaking out about abortion rights. Among the supporters is reproductive rights activist, Renee Bracey Sherman.

This is wonderful, joyful, and powerful.

Cecily Strong as Goober the clown had me all kinds of emotional.
Powerful.
Women deserve better. The shame and stigma can't stand.#SNL
#cecilystrong pic.twitter.com/JXlBtUSZXH

According to CMI, “Comedy can introduce people, social issues and, new norms in non-threatening and “non-othering” ways that encourage identification and connection, rather than alienation.” Thus, we can see why Strong’s comedic approach towards discussions about abortions has received so much praise.