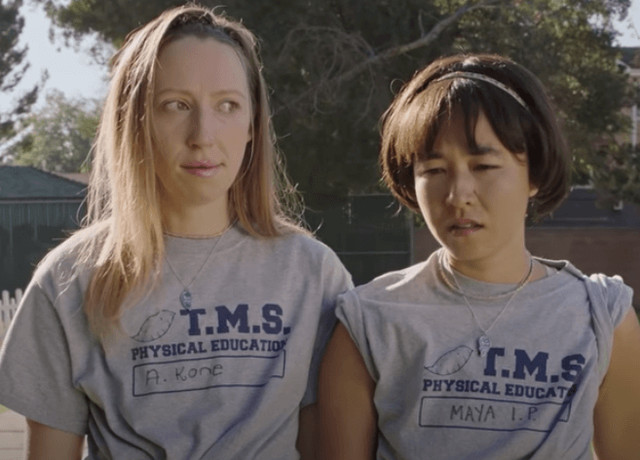 PEN15 is back to fulfill all your Y2K nostalgia with the second half of its second season. And have no fear: it’s loaded with plenty of awkward tween romance, shady AIM chat rooms, and embarrassing bodily changes.

The Hulu original series premiered in 2019 with rave reviews, immediately establishing itself as the number one TV cringefest. It depicts the early-2000s middle school experience as it really was for series creators Maya Erskine and Anna Konkle. Both 31 at the start of the series, Erskine and Konkle play their 13-year-old middle school selves, with a supporting cast of actual 13-year-olds. Needless to say, hilarity ensues.

Both social outcasts, tweenage Maya and Anna struggle through hopeless crushes, spars with parents, and budding sexuality. Turns out, the embarrassments of seventh grade spare no one, and PEN15 perfectly captures all the identity crises, social pressures, and, of course, angst of adolescence.

The first half of PEN15’s second season left Maya and Anna really going through it. Anna, still reeling from her parents’ separation, was told she’d have to choose between living with her mom or dad. Meanwhile, Maya was in the throes of some major heartbreak after getting dumped by her boyfriend, Gabe.

A trailer for season two, part two was released on Wednesday and indicates some big changes on the horizon for our wallflower protagonists. Steve, Anna’s theater techie crush, makes their budding relationship boyfriend-girlfriend official. And just as Maya’s starting to feel like a third wheel to the theater kids, salvation arrives. That’s right: Maya finds a high school guy. Now, with both of the besties all cuffed up, the rest of the season will cover the ups and downs of first love.

Of course, the story doesn’t stop there; Maya and Anna will also face some dicey family drama, with Anna forced to mediate for her increasingly immature, feuding parents. Maya, on the other hand, must deal with her overbearing mother and try not to be too jealous of her brother’s snazzy new flip phone.

PEN15 returns to Hulu with six new episodes on December 3 to conclude its second season. The first eight episodes are already on Hulu, so what are you waiting for? Hunker down this holiday season and get caught up on all the striped shirt, gel pen, and  Nokia phone magic of PEN15 because more is on the way! For a first look into what’s next, check out the new trailer here: