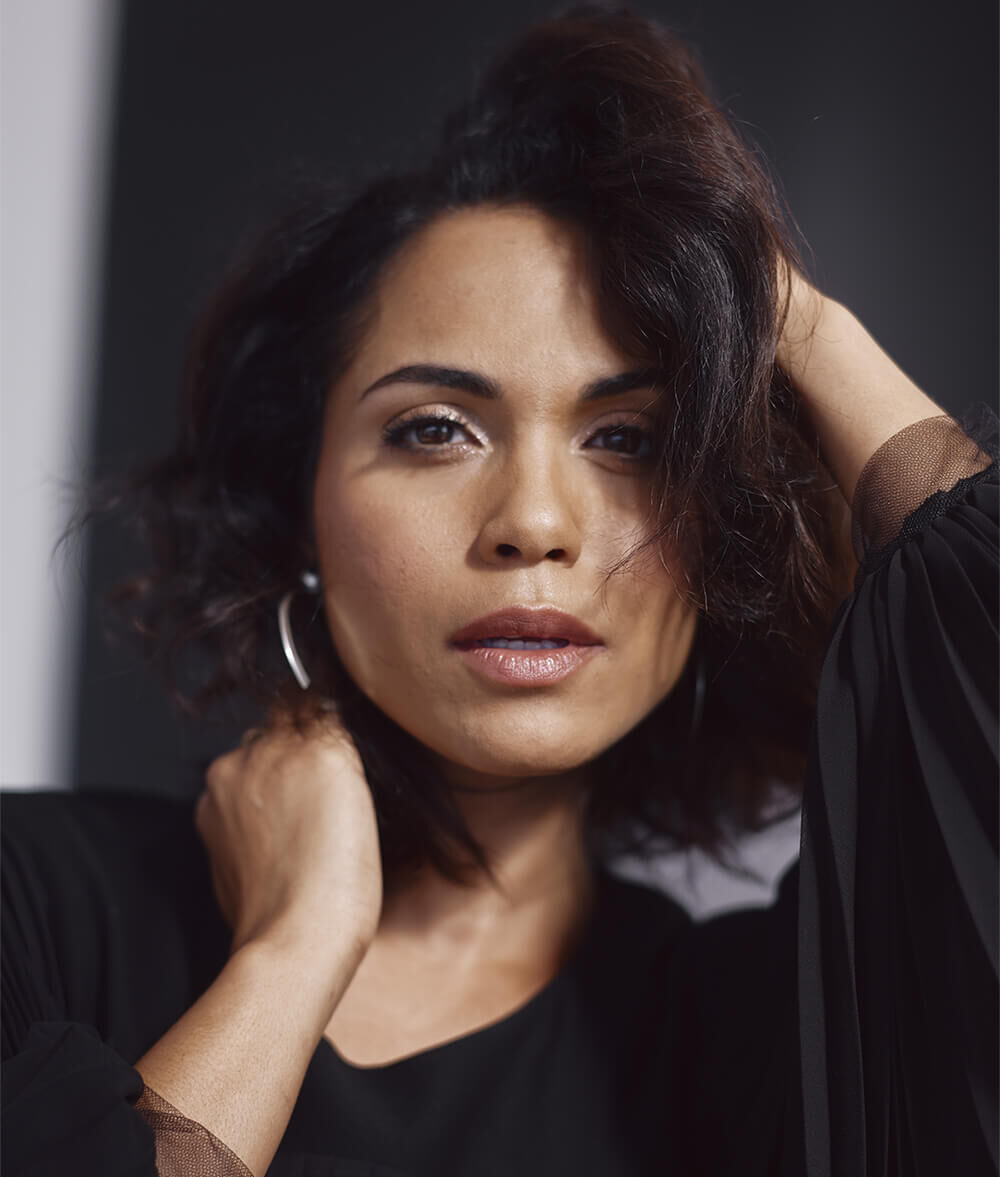 Monica Raymund is back as Jackie Quinones for season two of Starz’s Hightown. Created by Rebecca Cutter (Gotham) Hightown is set against the backdrop of the Cape Cod Massachusetts opioid crisis. When the series begins, Raymund’s character Jackie, is a hard-partying National Marine Fisheries Service agent with a thing for too much alcohol and toxic women. After a one-night stand in season one, Jackie finds the body of a murdered woman. Desperate to find out who did it, the special agent is almost engulfed in the investigation as she also grapples with her addiction.

In an interview with BUST, the crime-drama star discusses the complexities of her character Jackie, how the landscape for Latina and queer actors has changed over her career, her recent turn directing for shows like Law and Order: Organized Crime, and what’s next for Jackie and the world of Hightown.

BUST: What initially attracted you to this role?

Monica Raymund: I was really attracted to the story and how Jackie was moving through the world, trying to fill her void. I found her to be this hero leading the charge of this dark crime drama, but she also had so much darkness and messiness about her. As much as she was on the journey of solving this crime she was also on the journey of solving herself. And I really loved that complexity that came with the role, and also just being able to play a character of a female-led show, where usually that space is inhabited by a male.

It was just a wonderful opportunity for me to represent myself, to represent a woman, a Latina woman in the Queer community. But that’s not all the show is about. It's about the story, the crime, and the other characters in the world. Instead of it being about the color of her skin or her sexual preference.

B:  Your character spent much of season one battling her sobriety and getting kind of obsessed over tracking down the killer of this murder victim. Where is Jackie at the beginning of season two?

MR: In Season two, [Jackie] starts the season a little bit more cleaned up with a little bit of sobriety under her belt. We see her now working for the police department in Cape Cod. She's starting Season two off on the right foot.

B: In a lot of ways, Jackie is very mysterious and not a lot has been revealed about her past. Do viewers get to know more about her background in season two?

MR: Yeah, in season two you get introduced to her father. The father comes back into the picture, and we see their relationship and how tenuous it was. We see how her dad sort of is a trigger for some of her trauma. Things gets a little messy and a little squirrely when he's around.

B: Previously you played paramedic-turned firefighter, Gabriela Dawson on Chicago Fire for six seasons and now you’re playing a cop. Was it intentional to play these “tougher” type roles?

Yes and No. It’s intentional for me to be playing strong, dynamic, and complex characters characters — characters who have very difficult challenges and face adversity and overcome it. That's very interesting to me as a storyteller.

And also I think there's a sense of me just naturally being a little bit more stubborn because I myself am a little bit of a tough, broad. So I think both of those things are true. Like Monica's thoughts are the character's thoughts, right? Like as much as my natural self is coming through, it’s as much me curating the career that I want to walk.

B: Like your character, you identify as a queer woman. How has the landscape for queer actors changed over the course of your career?

MR: The landscape has changed drastically. The market right now is just booming with stories that are very inclusive, where you see the intersectionality of culture, of identity, communities of race. We've created space for ourselves to be a part of the cultural shift that's happening. I think it's essential because the world watches television, and the world wants to see what is reflected as much as they want to escape. They also want to relate. And I think that being able to be a part of a story that embraces the queer community is essential. It's essential to being a part of the change that I want to see.

B: You participated in NBC’s Female Forward Directing Program. How was the experience for you?

MR: NBC Female Forward, it's a wonderful program that guarantees candidates shadowing a couple of episodes on a TV show, and then guaranteeing them an episode to direct. So if you get accepted into the program, you are guaranteed to direct an episode of television show, wherever they choose to fit you. The program is not only exceptional in that regard, but also it's really about the educational aspects that they provide. Something that's really difficult for up-and-coming directors to have is access and Female Forward Program and NBC, granted me access to some of the best directors in the business, other actors and producers.

B: As an artform, how is directing different from acting?

MR: Directing gives me more access to collaborating with more artists. First of all, they're very different art forms, extremely different parts of the brain. Acting also you're a little bit limited in terms of who you get to collaborate with. You collaborate with the other actors, sometimes the writers, sometimes the directors, but that's sort of where your wheelhouse is. As a director, I'm collaborating with everybody in every aspect of the production: department heads, production design, hair and makeup, wardrobe, cinematography, the camera department. The writers, the creator, the showrunner. I get direct access to the showrunner. I get to ask questions about how the story needs to be seen and told, and that kind of collaboration just really feeds my soul because I got into this business to work with other people. And directing really offers that opportunity for me. I like to be surrounded by very smart and artistic people. And I hope to be surrounded by people who are smarter than I am, so that I can follow and do a good job. And so directing puts me in a position to be surrounded by really experienced artists who I get to work with.

B: Outside of the program, who else have you directed for?

MR: Yeah, just a few days ago I wrapped on a Law and Order: Organized Crime episode, and before that I was in Nova Scotia, and I directed the series finale of The Sinner for USA Network. And then I've directed a bunch of Law and Order SVU. And then Hightown.

B: What can people look forward to this season on Hightown?

MR: Well, there's some sexy-love, romantic stuff going on- on the side for various characters. I would say dangerous love is happening, as well as dangerous murder. We are introduced to Luis Guzman, who joins our cast as Frankie's cousin Jorge. And we see Luis and Frankie, they're now sort of running the joint running the operation, and they’re starting to take over the territory. So it's gonna get pretty, pretty nasty and bloody. You're going to see some real loyalty being explored here. Loyalty between Ray and Jackie, between Ray and Rene. But there's also a loyalty issue between Rene and Frankie. So a lot of people are sort of being loyal and also two-timing that loyalty. Who's telling the truth and who's lying to your face? Are you sleeping next to the enemy? Those are some big questions this season.