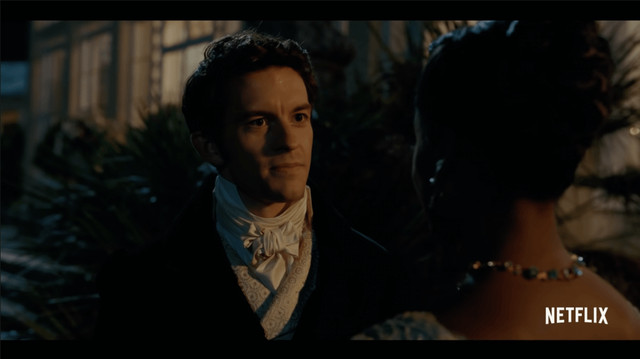 Good news for Shondaland-lovers : Netflix has revealed the first images for Bridgerton’s second season and it is about to be full of plot twists. Bad news, it will not include fan favorite Duke Of Hastings(Regé-Jean Page.) Following the adaptation of Julia Quinn’s book, The Duke And I for the first season, the second one will be based on the author’s second novel, The Viscount Who Loved Me.

The second season will still be based in 1800’s United Kingdom but this time, will follow Anthony Bridgerton (Jonathan Bailey) as he tries to find the perfect spouse and meets his love interest, the challenging Kate Sharma (Sex Education’s Simone Ashley). Considering the first images released by Netflix, their relationship will be off a rocky start.

On September 25, Netflix released a one minute long first look into the second season showcasing a heated discussion between newest lady Kate and the charming Anthony. Kate seems to be reproaching Anthony’s wife’s criterias. In the middle of the Bridergtons and the Featheringtons families, a few new characters will be introduced such as the Sharma family, Kate’s family. Edwina (Charithra Chandran), Kate’s sister, who was originally set to marry Anthony, and Sharma the Lady Matriarch are joining the casting.

During Netflix’s TUDUM panel, Nicola Coughlan (Penelope Featherington) was asked to describe season two as if she was Lady Wisthledown, and in the word of Ton’s most famous gossiper she said : “Dearest gentle reader, the biggest rake in London is about to met his match in more ways than one.”

In January 2021, on Shondaland’s instagram account a post was shared where Lady Whistledown (The fictional town’s gossip writer) announced the return of the serie for a second season. The production was set to start in April 2021 but was delayed due to COVID. Although there is no release date yet, the new season is set to be available in Spring 2022.