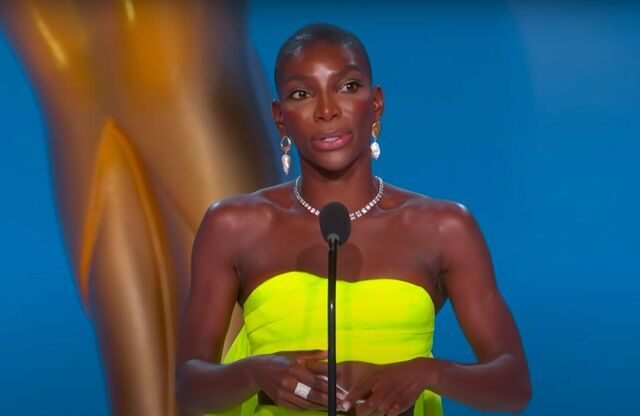 Michaela Coel continues to get her flowers, nabbing her first-ever Emmy for Outstanding Writing for a Limited or Anthology Series or Movie for I May Destroy You, this past Sunday.

Coel, who created, wrote, co-directed, and starred in the 12-episode sexual assault drama, is the first Black woman to ever win in this category. She even received a congratulatory stamp of approval from the queen of TV herself, Shonda Rhimes:

In I May Destroy You, Coel plays Arabella, a London-based writer whose life is upended after she is drugged and raped at a popular nightclub. Coel based the show around her own experiences with sexual assault, creating a riveting and unflinchingly honest look into the enduring effects of sexual trauma.

“I just wrote a little something, for writers, really,” Coel began her acceptance speech. She continued with a moving address to marginalized storytellers everywhere.

“Write the tale that scares you, that makes you feel uncertain, that isn't comfortable. I dare you,” Coel stated.

“In a world that entices us to browse through the lives of others to help us better determine how we feel about ourselves, and to in turn feel the need to be constantly visible, for visibility these days seems to somehow equate to success—do not be afraid to disappear. From it. From us. For a while. And see what comes to you in the silence.”

Coel concluded her speech, “I dedicate this story to every single survivor of sexual assault. Thank you.”

Coel’s award comes after the series was noticeably snubbed at this year’s Golden Globes, despite receiving overwhelmingly positive reviews since it premiered last June. The Hollywood Foreign Press Association’s failure to recognize the series led to criticisms of the HFPA's completely white body of members and calls for new diversity initiatives within the association.

I May Destroy You’s Globes snub also raised questions about who receives a platform to explore stories of sexual assault. Are these narratives only palatable to the Hollywood establishment when told by white women?

In reality, women of color are more likely to be assaulted than white women, yet representations of sexual assault onscreen often fail to tell their stories. Promising Young Woman, a film that also discusses sexual assault but with (shocker!) a white protagonist, was as lauded at the 2021 Globes as I May Destroy You was ignored.

Coel’s was the rare speech that captures the change-making possibilities of major award shows. While there is still a lot (like, a lot) to be done to dismantle Hollywood’s hegemonic structure, her speech offered a direct appeal to the industry’s underrepresented and unacknowledged voices.

What’s next for the Chewing Gum creator? Short answer: a lot. She released her first book, Misfits: A Personal Manifesto, earlier this month. She’s also been tapped for the ensemble cast of Black Panther: Wakanda Forever, the much-anticipated sequel to Marvel’s 2018 Black Panther, which is set to release next July.

Check out Coel’s full acceptance speech here, and go stream I May Destroy You on HBO Max right. damn. now.

Michaela Coel’s first book, “Misfits: A Personal Manifesto,” is an emotional dive into her experiences of racism and sexism as a Black British woman.