Ilana Glazer Presents Comedy on Earth, a Time Capsule-Love Letter to the New York Comedy Scene in the COVID-19 Era 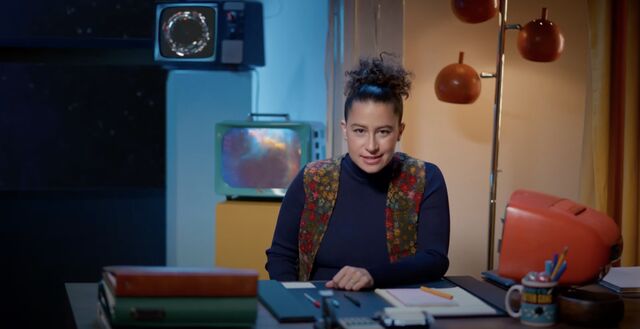 Inspired by the launch of the Voyager Golden Record in 1977, Ilana Glazer (Broad City) creates her own snapshot of humanity with Ilana Glazer Presents Comedy on Earth NYC 2020-2021. With the help of her artificially intelligent assistant VAL 420, Glazer hosts a one hour comedy time capsule, hoping to share a piece of human existence with "extraterrestrials" and to remind ourselves of all we've come through. As Glazer says, “If we didn’t record it, you wouldn’t believe it.”

Ilana Glazer Presents Comedy on Earth: NYC 2020-2021 encapsulates (if you’ll pardon the pun) the first pandemic year and the ways it changed comedy in New York City, from adapting to stand up shows over Zoom, to the eventual return of live (outdoor) shows. It features stand up sets by Petey DeAbreu, Alison Leiby, Larry Owens, and Sydnee Washington, as well as interviews with the comedians about the impact the COVID-19 pandemic had on their lives and how they handled not being able to perform comedy in real life.

The sketches throughout Comedy on Earth are a major highlight. Following the 1977 Voyager mission throughline with colorful, retro costumes and appearances by many of the comedians featured in Ilana Glazer Presents Tight Five, which debuted on Comedy Central Stand-Up’s Youtube channel earlier this year. It’s fun to see Ilana Glazer comedy faves like Marie Faustin, Kristen Buckels & Lacey Jeka, and Alex English step out of stand up and put on their acting hats.

Comedy on Earth does what comedy does best: helps us make peace with, or at least stomach, the hard, bad, sometimes devastating parts of being alive. It’s been rough lately, and Glazer and her fart-joke-loving AI companion guide us through a hopeful, celebratory love letter to comedians, New York City, and the resiliency of both.

In addition to curating comedy specials with up-and-coming comedians, the 34-year old actor and producer branched out this past year, starring in the horror film False Positive. It was also announced this week that Glazer would co-host the livestream of the 2021 Met Gala with Keke Palmer.