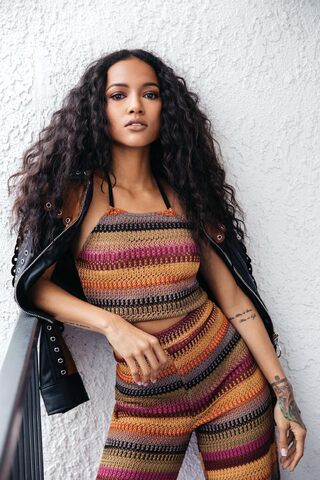 Karrueche Tran broke the glass ceiling for Asian American and Pacific Islander actors with her recent award win last Sunday. The 37-year-old took home the Emmy for outstanding performance by a leading actress in a daytime fiction program, becoming the first AAPI leading actress to win an Emmy at either the Daytime or Primetime awards.

The Los Angeles native snagged the trophy she did so for her role in POPSTAR TV’s digital drama The Bay. Tran plays Vivian Johnson-Garrett, one of the wealthy residents of the fictional Bay City a town cursed with scandal, betrayal, and heartbreak that entangles all those within its borders.

Originally premiering in 2010, The Bay has swept up 19 total Emmy awards— including 4 wins for outstanding digital daytime drama series. Tran herself has also collected two of those wins for her work producing the show in 2016 and  2017.

Tran, who is Black-American and Vietnamese, spoke about her win on her Instagram Tran expressing, “to be a representation of a community that is so often overlooked and underappreciated brings me to tears.” Tran wasn’t the only one to make Emmy history at Sunday’s award show. Jodi Long became the first AAPI winner of the supporting actress category for her role in the Netflix series Dash & Lily.