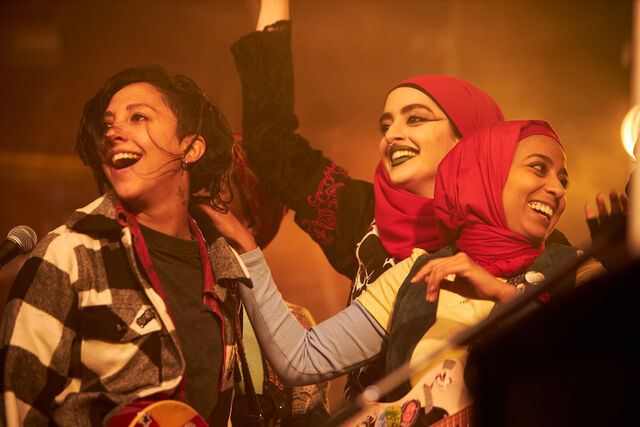 “We Are Lady Parts,” written and directed by Nida Manzoor, is a hilarious British TV show about an all-girl, Muslim punk band. It’s fronted and supported by a cast of sexy as hell people of color of various genders, skin tones, and ways of presenting themselves, and if you don’t fall in love with every character in this show you’re insane (or incredibly picky which is fine too). And while this is technically a review of the show, it’s also me fangirling all over it to convince you that  YOU MUST WATCH THIS.

“We Are Lady Parts” introduces us to Saira, the commitment-phobe lead singer/guitarist whose one true love is her band; Ayesha, the angry, deliciously punk, over-the-top-eyeliner-wearing drummer girl of my dreams; Bisma, the hilariously opinionated bassist, wife, mother, and fantastically gorey feminist comic artist; and Momtaz, the niqab-rocking, no-shits-giving band manager who is perpetually haloed in a cloud of vape and badassery.

The women are trying to succeed with their band, Lady Parts, and are looking for a guitarist to take them over the edge. Enter Amina, a microbiology Ph.D. student who is held captive by her stage fright which makes her prone to throwing up and shitting herself… but who is also actually a really amazing guitarist (pinky swear). Using Ayesha’s borderline illegally gorgeous brother, Asan, as a romantic bargaining chip, the ladies of Lady Parts attempt to get Amina to join the band. Now I can’t tell you how the date went or what happened after that (you’ll have to watch for yourself) but I can tell you that you will become obsessed, binge it all the way through, and join me in waiting miserably for the next season. I must warn you that there is a random bit in episode one where our main character is singing and puppets get involved. DO NOT ABANDON SHIP. It never comes up again and the rest of the show is decidedly less cringe-y, trust me. 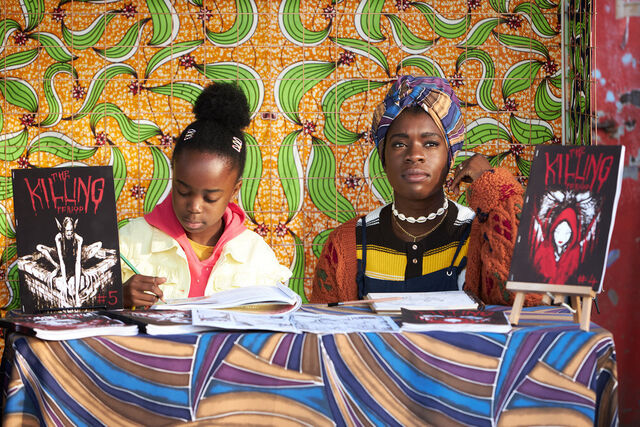 Just six episodes long, “We Are Lady Parts” is packed with enough heartwarming sisterhood, shockingly good girl punk music, and witty, riot-grrrl-esque modern Muslim women to keep you hooked. It’s seriously good and only available on Peacock with a premium subscription. No offense meant to PeacockTV, but if this was on Netflix you would have already seen it by now and be just as uncontainably obsessed with it as I am. This is not a sponsored review so I’ll just say this: Get that 7-day free trial on Peacock if only for this. Hell, maybe you’ll find some other good stuff to watch and decide to stick it out for an actual paid membership. But if the subscription is the only thing holding you back, don’t let it. I desperately need this show to get renewed.

Tags: We Are Lady Parts , muslim , hijabi , girl punk , television , peacocktv , Nida Manzoor , feminist , PUNK , cool girls
Support Feminist Media!
During these troubling political times, independent feminist media is more vital than ever. If our bold, uncensored reporting on women’s issues is important to you, please consider making a donation of $5, $25, $50, or whatever you can afford, to protect and sustain BUST.com.
Thanks so much—we can’t spell BUST without U.