Does Netflix's Upcoming Season Of "Master Of None" Hide Behind Queer Black Women To Sell Audiences A Dying Show? 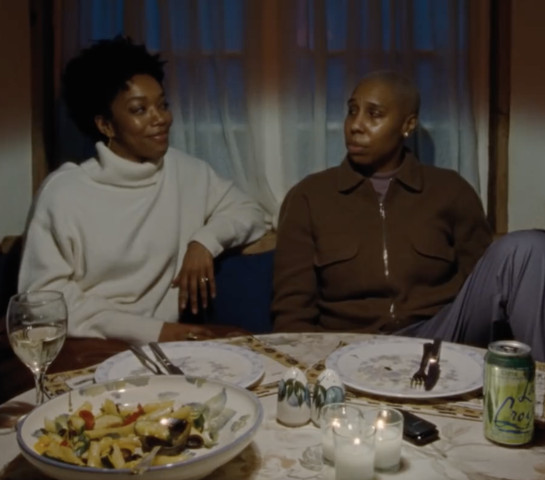 After four long years, the third season of Aziz Ansari’s offbeat comedy series Master of None is officially in the lineup for Netflix’s programming this May 23. Only this time, as opposed to following season one and two protagonist Dev (a semi-autobiographical character based on Ansari himself), the show will now revolve around Lena Waithe’s beloved character Denise. The trailer surfaced online yesterday afternoon, teasing fans of what’s to come. Denise and her spouse Alicia (Naomi Acki) sit at the dinner table, Denise having just asked a hypothetical question that's all-too-familiar for couples who’ve been through hell and back together. “Let’s say we’re at a party; Maxwell’s playing. You don’t know me, I don’t know you, and I ask you out on a date. Would you say yes?” What follows in the silence before Alicia answers is a montage of images, illustrating the emotional highs and lows of their relationship.

“Yes. I said yes then, I’d say yes now,” Alicia replies, not-so-convincingly. From staring at one another lovingly in the bathtub, to tearful, animated arguments; from the trailer’s warm, earthy color palette, to its intimate cinematography; this mere glimpse into Denise’s long-awaited character arc feels more than refreshing. At first a peripheral character, audiences fell in love with Denise’s storyline back in season two’s “Thanksgiving” episode, in which she navigates the complexities of the annual holiday season in a Black household, while also coming more and more into a queer identity.

Co-written by Waithe and Ansari, the episode remains a groundbreaking moment in Waithe’s career, as she became the first Black woman in history to win a Primetime Emmy Award for Outstanding Writing in a Comedy Series. Waithe has since gone on to become a complicated figure in the film and television world, to say the least. As the screenwriter for her debut feature film Queen & Slim (2019) and, more recently, as the executive producer of Amazon Prime’s Them (2021)—a dramatic horror series eerily derivative of Jordan Peele’s Get Out (2017)—Waithe has maintained a tattered track record with audiences for writing and producing projects that amplify Black trauma narratives.

But, to her credit, Waithe does exceedingly well when her work centers more-or-less average Black and queer folks who embark on journeys to locate the meaning and joy in their everyday lives, as with her writing for BET’s hit-series Twenties (2020) and as the executive producer for the Radha Blank-written and directed Netflix original film The Forty-Year-Old Version (2020). In what ultimately feels like a full circle moment, Waithe will surely be back in her element as the co-writer of this upcoming season of Master Of None: Moments In Love.

As far as representation is concerned, Denise and Alicia becoming the focus of the show explicitly subverts dominant portrayals of queer relationships in the media. Today's programming is especially notorious for relegating queer Black characters to relationships involving white and other non-Black partners. From Rue and Jules (Euphoria) to Kelly and Yorkie (Black Mirror's "San Junipero"), queer interracial romances have become the norm, making it increasignly rare that audiences get to indulge in authentic depictions of queer Black love. Not only that, but as one Twitter user points out, the queer Black characters in question are almost never dark-skinned, highlighting the rampant colorism of Hollywood's writing and casting divisions.

@ all tv shows writers! If you have a black queer woman in your show they don’t have to be dating a white women and be light skinned! https://t.co/mi5f94TbsD

This is the kind of on-screen romance that many of us have been waiting for, right? As two queer Black women in particular, it'll be remarkably interesting witnessing Waithe and Acki play off of one another as their characters navigate human phenomena such as marriage and fertility. Still, one can’t help but wonder why exactly the creators chose this particular direction for the series. While Ansari’s physical absence from the latest trailer is strikingly apparent, his creative influence over the production becomes clear when he’s acknowledged in the credits not only as Waithe’s co-writer, but also as the director of the soon-approaching, five-episode season.

The show took a lengthy hiatus following accusations waged against Ansari at the height of Hollywood’s co-opting of the #MeToo movement in January 2018. It was reported that, “A woman with the pseudonym Grace accused the comedian of being overly aggressive with her on a date, telling The Atlantic that she felt Ansari ‘violated’ her, adding, ‘That that whole experience was actually horrible.’”

Ansari ultimately denied and apologized for the claims and, never having faced any serious criminal charges, has been spared his professional relationship with streaming giant Netflix. His accuser, on the other hand, was heavily gaslighted in the media and by fans, with many taking up in defense of Ansari and referring to the alleged incident as a “bad date,” rather than the violation of affirmative consent that many others have interpreted it to have been.

In similar fashion, the season three trailer for Master of None has drummed up much debate among fans and foes over the implications of there even being a third season to anticipate at all, given the circumstances. One Twitter user in particular made an all-too-real prediction for season 3, ultimately asserting how Ansari not only has yet to be held accountable for his actions, but also is continuing to thrive in a system that has protected him—as a money-making, TV award-winning asset—at all costs.

All of Hollywood’s virtue signaling clearly has had no bearing on Netflix’s decision to move forward with the series, making the decision whether or not to watch this upcoming season all the more complicated. “Co-created by Ansari and Emmy Award-winner Alan Yang, Season 3 delivers an evolution of the series that remains tethered to previous seasons while breaking new storytelling ground of its own,” read Netflix's season three synopsis. While Waithe (as Denise) will be the core of the series moving forward, Ansari’s looming presence is still largely felt, as a faceless, yet highly integral part of the creative process in the making of Moments In Love.

Will this season actually be an authentic exploration of Denise’s romantic life as a thirty-something-year-old queer Black woman—representation we desperately need on our TV screens? Or, does the series now read as more of a last-ditch attempt to hide behind the shield of diversity as a means of saving a profitable show that otherwise would have ceased to exist? In essence, the decision feels very exploitative, and these are ultimately the types of questions that potential viewers must reckon with in the weeks leading up to next month's season premiere.

Top Image: Screenshot From Master of None Season 3 Trailer

Tags: Master Of None , Moments In Love , Lena Waithe , Aziz Ansari , Netflix , #MeToo , Hollywood , Allegations , Media Representation , Master Of None Season 3
Support Feminist Media!
During these troubling political times, independent feminist media is more vital than ever. If our bold, uncensored reporting on women’s issues is important to you, please consider making a donation of $5, $25, $50, or whatever you can afford, to protect and sustain BUST.com.
Thanks so much—we can’t spell BUST without U.