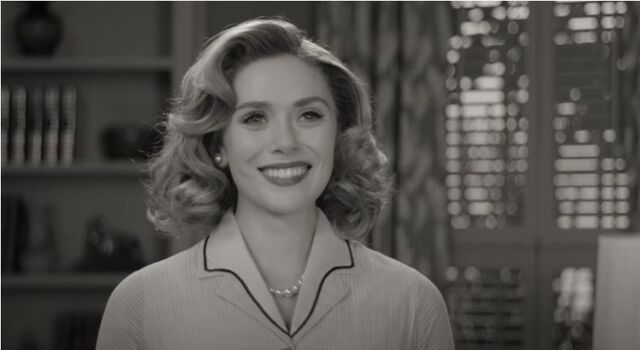 By now, we've all heard of the hit Disney+ show Wandavision. The show revolves around Wanda Maximoff (Elizabeth Olsen) as the main protagonist and Agatha Harkness (Kathryn Hahn) as Wanda’s neighbor-turned antagonist. (Grief, of course, is the main antagonist.) Monica Rambeau (Teyonah Parris) and Darcy Lewis (Kat Dennings) play supporting characters. Watching this show will take you on an emotional journey: Wanda, Monica, and Agatha experience loss of loved ones, but throughout the series, we're able to see them grow stronger and eventually learn to carry on. Meanwhile, the characters of Monica and Darcy face adversity from their male boss when he refuses to listen to them, both ladies rebel against him by figuring out how to enter the hex. Wandavision shows the strength of each woman and how they conquer their trials and tribulations. They prove that anyone can push through any of life's hurdles.

Wanda is grieving over the loss of the love of her life, Vision (see The Avengers: Infinity War) and her twin brother, Pietro (see The Avengers: Age of Ultron.) In order to cope, she created the reality she ached for through the hex. We witness her journey through various stages of grief. During the final episode, she must destroy the hex to set the people she trapped free, which meant saying goodbye to those she loved. By the end of the episode, she has lost her husband three times, her brother twice, and her children. In the end, we see her learning to accept the circumstances. Wanda is still pushing through, trying to become more powerful. Not only is she spiritually strong, Wanda is very powerful, making her the second most powerful Marvel superhero (with Captain Marvel being the first). Wanda represents strength through mourning, how someone copes with their losses while moving on from them. She shows that there is life after loss.

Another character is Monica Rambeau: When Thanos wipes out half of the universe's population and the people returned after he was killed, her mother ended up dying during the five-year blip. Monica pushes through her grief and agony, ultimately resuming her position as captain at an intelligence agency called S.W.O.R.D. Monica dominates in the male-oriented agency, making her strong in her work and through her heartache. She stands her ground against the men in the agency—this is mostly seen after she gets fired. Instead of breaking down, Monica takes matters into her own hands, teaming up with Darcy to figure out Wanda's hex. She and Darcy decode the hex on their own, not allowing the men to deter them from accomplishing their goal.

She, along with a group of men, are called in to analyze and infiltrate Wanda's hex, making her the only woman whom S.W.O.R.D. asked for help. Darcy outsmarts all the group’s men: She is the one who figured out that Wanda is controlling the hex's reality and that someone was using Wanda as a puppet—that someone is Agatha Harkness. After Monica gets fired, they work together and end up being the ones to figure out the hex.

Originally known as nosy neighbor Agnes, Agatha is the one pulling the strings in Wanda's reality. A witch herself, Agatha faced betrayal and death when she was tied against a wooden stake by her witch coven during the Salem Witch Trials. To add more pain, her mother was a part of the coven and helped tie her daughter to the stake. Agatha was an inexperienced, powerful witch whom the coven feared. They attempted to drain her power and kill her, but she ended up killing them. Through her centuries-long existence, Agatha used this heartache to strive to become more powerful. She stood a fighting chance against Wanda, only to end up being defeated and having her memory erased. Regardless, she did overcome her adversity and was one of the most powerful characters in the series.

The action, emotions, and drama all make this a must-see show, and Wandavision has rightfully been praised for its strong themes related to grief, love, and family. But something else that really sets Wandavision apart, especially from other male-centric Marvel projects, is the world of strong, morally complex women who kick ass in myriad ways. Wandavision is about many forms of power, from bravery to knowledge to magical abilities, and all of these are wielded by women who remind us that we can do anything—even overcome adversity, heartbreak, and loss.

Tags: Wanda Maximoff , Monica Rambeau , Darcy Lewis , Agatha Harkness , Scarlet Witch , Agnes , feminism , superheroes
Support Feminist Media!
During these troubling political times, independent feminist media is more vital than ever. If our bold, uncensored reporting on women’s issues is important to you, please consider making a donation of $5, $25, $50, or whatever you can afford, to protect and sustain BUST.com.
Thanks so much—we can’t spell BUST without U.