You Didn't See SNL's Best Dan Levy Sketch, Lampooning Toxic Masculinity, Because It Was Cut for Time. So Watch It Now! 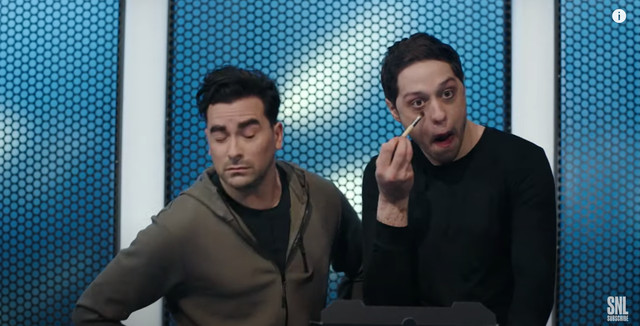 “Men’s Cosmetics'' follows SNL’s oft-used commercial-spoof format, this time for “a new line of revolutionary skin ammo” from the fictional brand MAN STAIN. Set in a minimalistic gym and starring Levy, Pete Davidson, and Alex Moffat, the commercial features a disembodied narrator who assures the iron-pumpers, in the yelling tone of a pushy personal trainer, that MAN STAIN products are “definitely not makeup.” “Formulated just for the guys, MAN STAIN helps you look your best,” the voice barks. “It levels up your mug for peak appearance performance.” Levy, who is openly gay, stars as the voice of reason: “So it’s makeup.” “Nah, dude, makeup’s for girls,” the narrator insists.

The commercial goes on to advertise products such as “Double IPA Tinted Dude Fluid” (foundation), “Exertion Niacin Rush Booster” (blush in a gun), “Mouth Grease” (lip gloss) and, last but not least, the essential “Meat Lover’s Guyshadow Eye Dirt Pizza Compact” (which is literally just the Morphe x James Charles Pallette in a metal pizza box). Levy’s character questions the “very violent language” used to describe these commonplace beauty products. The sketch caricatures the almost comical ways in which male-targeted products from deodorant to dietary supplements are marketed, which often oversimplify and homogenize the male population into a series of harsh and even violent stereotypes—anything to keep from being associated with the worst insult of all: being female. ("From the makers of NutriSystem for Men," the ad ends." It's not a diet—cause that's what girls do!") Of course, female-focused branding also tends to reinforce outdated and often toxic “feminine ideals,” but male-focused branding can be just as damaging to all genders in equating masculinity with aggression.

If the joke were “guys wearing makeup lol,” then “Men’s Cosmetics” would be left in humorless, and even homophobic, territory. But Levy’s role makes the sketch particularly shrewd, and not just because of his expert delivery. His character cuts through the bullshit of MAN STAIN, not to poke fun at the prospect of men wearing makeup, but rather to validate the idea and to encourage the men in the commercial to remove their needless macho armor. “It’s okay to wanna look nice,” Levy’s character says in the midst of the ad’s swirling, combative taglines. When the guys show off their made-up faces at the commercial’s conclusion, Levy’s character stands in contrast to the ad’s “You’re a man, goddamn it!” approach by saying, “You guys look good!"

The axed sketch would have been worth the airtime for its sensitive handling and on-the-nose portrayal of man-targeted marketing. SNL is built on the idea that the choicest comedic material can be excavated from the ridiculousness of reality, and in this case, “Men’s Cosmetics” lampoons toxic masculinity by making aggressive marketing—not men wearing makeup—the punchline. In one and a half minutes, the sketch makes a case that men who want to wear makeup should feel free not only to do so, but also to own it. And, in the hostile words of the MAN STAIN narrator, “If you’ve got a problem with that, you can go straight to hell!”

Michaela Watkins Talks "SNL," "The Unicorn," And Laughing Till You Pee On BUST's "Poptarts" Podcast

Tags: Dan Levy , Saturday Night Live , Men's Cosmetics , toxic masculinity
Support Feminist Media!
During these troubling political times, independent feminist media is more vital than ever. If our bold, uncensored reporting on women’s issues is important to you, please consider making a donation of $5, $25, $50, or whatever you can afford, to protect and sustain BUST.com.
Thanks so much—we can’t spell BUST without U.