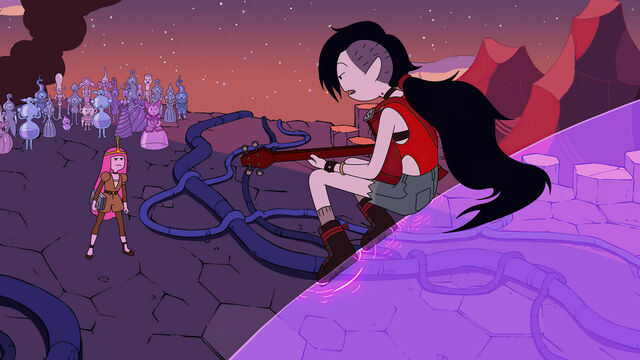 The magic of animated shows like Adventure Time is that they always find a way to deal with adult themes. Adventure Time: Distant Lands - Obsidian, an hour-long special based on the Cartoon Network series, definitely falls under the category of smart animated episodes that are easy for audiences of all ages to watch, enjoy, and to rewatch again.

The reign of Adventure Time ended in 2018 after almost 8 years, and one of the most satisfying parts of the show was the romance between Marceline The Vampire Queen and Princess Bubblegum. Obsidian gives us a further look into the life of Bubblegum and Marceline and so much more.

Vampire Marceline has always been the “angry punk rocker,” while Bubblegum was the pink scientist princess from a literal candy kingdom. Although the couple may not seem like the perfect match on the surface, the two complement each other well.

In the special, we meet Marceline and Bubblegum living a pretty normal quaint life after the events of the original Adventure Time show. Long gone are the days of monster fighting and adventuring: Bubblegum spends her days doing her research while Marceline tries to write music, but struggles to tap into her “angry, punk-rock” self.

Bubblegum and Marceline are suddenly pulled from their lives of domestic bliss when a young boy from the glass kingdom seeks Marceline to sing her song to defeat the monster she once helped lock away, now loose and terrorizing the glass kingdom.

Viewers of Obsidian don’t have to watch the entire series to understand the relationship between Marceline and Bubblegum or even the world of Adventure Time. The flashback in the episode serves as a smart storytelling device to move the plot forward while giving new fans context on what is happening.

Where the show stands out is in its exploration of the the emotional history and complexities of the characters. Before Marceline and Bubblegum were together, Marceline had a pretty rough lot in life. She has no family, and overcame great loneliness and emotional trauma. Marceline thinks that she can’t write the perfect “punk rock” song because she isn’t that punk rock girl anymore.

By further exploring Marceline’s trauma, the episode provides a great deal of psychological wisdom. The episode explores why we hold onto trauma, and asks, how much of our identities are tied to the things that hurt us in our past? Sometimes, we may not realize we have already healed from our past traumas and no longer need to hold on to the identities we create as a coping mechanism.

The episode is packed with witty writing and catchy songs. If, like me, you tend to cry at everything, you might get a little teary-eyed while watching the show and listening to the dope lyrics. But emotional or not, and no matter your age, you'll feel affected by the beautiful adventure that is this episode.

Adventure Time: Obsidian is available to watch on HBO Max.

Sarah Stiles on Her New EP, Her "Steven Universe" Role, And How You Can Help Broadway During COVID: BUST Interview

"She-Ra's" Final Season Explores The Ethos Of The Show: Love