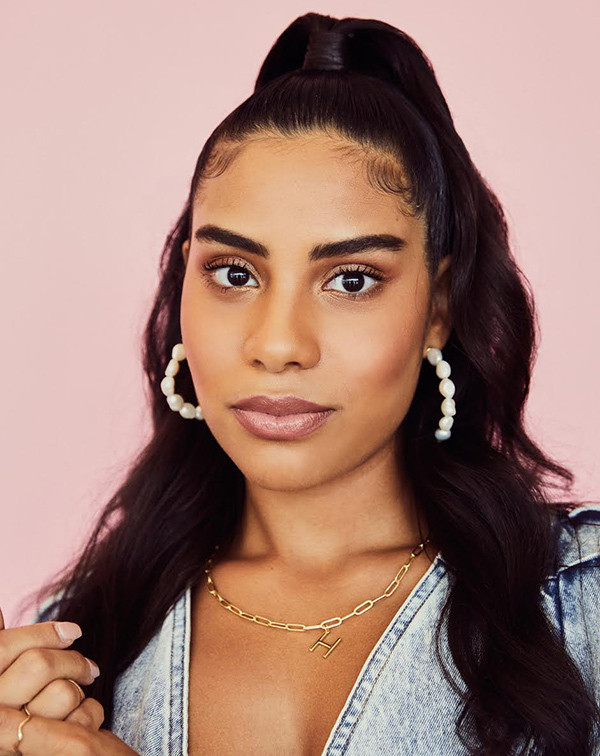 We’re excited for the reboot of 90's sitcom Saved by the Bell, and we're especially happy to speak with actress Haskiri Velazquez who plays Daisy, a Latina high school student whose school gets shut down and has to transition to life at Bayside High. Velazquez is an incredible actress who also recently starred in the critically acclaimed 40-Year-Old Version film by Radha Black.

She talked to BUST Magazine about her role in Saved by the Bell, acting in comedies and her aspirations as an actress in the future.

Did you watch Saved by the Bell when it first came out as a kid?

Actually, I didn't really watch it religiously as a kid, but my parents did. So, when I told them the news about the book in the show, they were like, “Oh my gosh, I grew up on that show. I watched it every morning.” It was really cool to experience that and see that moment come like full circle. But I did catch a couple episodes. And it's a really great show. I see some similarities from the reboot to the original show.

Can you describe your character from this new Saved by the Bell for me?

Daisy's very smart, very funny and selfless. She's so charismatic. But she's also very ambitious and passionate. It's really great to see her being portrayed in that light because she is a Latina character and you don't really see that on TV as much. So, her being this go-getter and taking on these obstacles that she faces at Bayside, it's so fun to portray.

Was there a character from the original Saved by the Bell that you used as inspiration for Daisy when you're acting?

I think when I looked at the original Saved by the Bell, I took a little bit of each character, because I do see a little bit of each character in Daisy with certain things that she says, certain stuff that she does. But I think maybe Mario I would say [inspired me] with him being a Latino on screen. You didn't really see that back in the day. I really did focus on his character and how they portrayed him on screen versus how they're going to portray Daisy on screen.

How do you think this spin off is different from the original?

I think it's different from the original because it has more of like, you know, the modern take to it. It deals with situations that are happening now in today's day and age. But also, the cast is diverse. Everyone comes from a different background. And I think it's more realistic, because it's simple. It's so relatable to the regular joe. It’s like, girls from where I grew up, I can see them being represented on TV. You know, it doesn't matter where you come from the cast is so diverse that everyone can relate in a way. And I think that it's so good to see that being represented on TV.

What kind of modern situations does this new show tackle?

Social media is [a] huge part. You know, some people are fortunate enough to have phones and that's what my character struggles with when she comes to Bayside. She sees all this technology around her and how the Bayside kids are fortunate to have all these gadgets and opportunities right in front of their face versus her. She comes from like, you know, the lower social, economic class of her neighborhood and her school gets shut down. So, when she goes to Bayside, she's really excited for all these opportunities, but she doesn't have the access to it as her fellow Bayside kids [do]. She takes it upon herself to become class president and really makes it her mission to get equality for all. And I think that's really great to see that because I grew up in that same situation where we weren't fortunate enough to have what everyone else had and I didn't really realize that until I went into high school. You get to see where so many different kids come from and you're like, “Oh, this is how you grew up? Well, I didn't grow up that way.”

What is it like working on a show, like Saved by the Bell with the stars from the originals?

It was super fun working with the original [cast] they gave us a lot of advice. But they were also just as excited to get back to being on set and being around their original cast mates. So they created this really fun environment. Being on this show, I think everyone has such a great relationship with each other. We bonded so well and I think it truly sold on TV.

What do you hope people get out of this spin-off show?

When people watch the show, I hope that they can see that Latinos aren't only like the maids or you know, they don't have this super sad storyline; that they can be these passionate characters. I think it's great to start creating stories in that way and stay with a comical life. It doesn’t have to be so super sad. It could be light hearted and fun.

I also saw that you were in this new movie, The Forty-Year-Old Version by Radha Black. Can you tell me a little bit about that?

The Forty-Year-Old Version. I play Rosa and she is a whole 180 from my character on Saved by the Bell. She’s a butch Latina but she's very confident in her own skin. I had to really get into that mode of these certain character traits that you know a butch Latina would take because I'm very feminine and I have very girly characteristics. But it was fun to transition [to Rosa’s character].

I saw that most of the shows and movies that you're in our comedies, is there a reason for that?

That's funny that you say that, because a lot of the auditions I go out for are dramas. Like, I don't know, maybe my headshot gives [off] this, like very dramatic vibe. But when people meet me in person, they're like, “Well, you're actually pretty funny. You should do comedy more often.” But then, when I do go off for the very few comical auditions that there are for Latina actresses, I do book them and I'm like, “I think we need to see more of that, you know, light hearted, funny, day to day [roles]. It doesn't always have to be so dramatic.

What are your aspirations as an actress for the future?

I think as an actress, I would really, really love to continue to share stories that have meaning [to] me. Also, I want to create my own nonprofit organization because that's how I got into acting. They paid for my train ticket so that I could get to and from class. They provided us with meals. And I think it definitely kept me off the streets and kept my mind focused on what I wanted to be in the future. It was because of them that I that I truly feel that I'm here today. I definitely want to start a nonprofit for young artists.

The Saved by the Bell spin-off is now streaming on Peacock. Watch the trailer below:

More from BUST
When Mother Is An Astronaut, In Alice Winocour's "Proxima:" BUST Interview
YA Author Tahereh Mafi On Why Style Matters To Her: A BUST Interview
Can Georgia's Stacey Abrams Save America?: Exclusive BUST Interview