Shedding The Skin Of Childhood In Season 2 Of "PEN15" 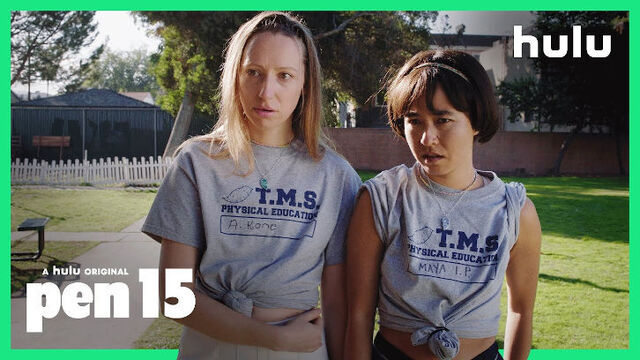 Living through the ages of 11 to 14 can feel a lot like desperately trying to shed the skin of your childhood. Watching Hulu’s “PEN15” will take you right back there, awkwardly attempting to become an adult overnight. You’ll probably see yourself walking right next to the 13-year-old main characters Anna and Maya, played by adult comedians Anna Konkle and Maya Erskine, as they learn what it means to be a ‘slut’ in the eyes of fellow middle schoolers, or viciously whisper fight with their mothers in thrift store dressing rooms.

In a particularly tense moment during gym class, Maya and Anna talk about their previous physical encounter with Brandt, Maya’s big crush. After the school dance in season one, Brandt felt up both Maya and Anna in a storage closet and word got out, deeming them to be sluts in the eyes of their classmates. Anna says, “Well, Brandt’s a slut too,” and Maya replies, “No, he’s just a player.” Both girls sigh as they come to terms with the reality that Brandt will be congratulated for the same act that they are punished for as if they had done something wrong.

The moment is devastatingly poignant as Maya and Anna’s previous excitement about crushes and boys is replaced by the overwhelming weight of being a young woman, scrutinized for every action. This scene, which appears early in the second season,  cements the show’s purpose with strength. Yes, the characters may talk about boys because that's what middle schoolers do, but through their obsessions and butterflies comes greater social commentary.

Where "PEN15" really gets it right is showing how Anna and Maya are still children at their core. Maya has her most honest moments soaking in the bath with her mom and Anna continues to play with dolls. The tension of these two warring realities, that somehow at the same time these characters can be called sluts and can still immerse themselves in playing like children is as close to the excruciating truth of being a preteen as you can get.

In an interview with the New York Times Erskine said, “We’re slut-shamed in the beginning and instantly start to hate ourselves, hate our vaginas and then hate women. So we wanted to show that reflection in our mothers, how you sort of turn against your mother at that age because you’re kind of turning against yourself — your mom is a reflection of yourself.”

In one early episode, Maya and Anna playact so intensely that they begin to see themselves as real witches, able to conjure whatever they desire, as a means to escape the reality of divorcing parents and rejection from the school hottie. Just a couple of episodes later, the same characters have very frank conversations with each other and their parents.

In a tearful moment at the back of an Olive Garden-esque restaurant, Anna apologizes to her Mom saying, “I'm sorry that I'm not nice to you all the time” and “I'm sorry that dad’s not nice to you sometimes.” It's hard to not feel your heart breaking for Anna and possibly for a past version of yourself too, one that needed to apologize to your mom. At least "PEN15" offers the momentary catharsis only a good cry in a family-style Italian restaurant can provide.

With the creativity of a show that reminds viewers of "Broad City," and the nuanced acting of the whole cast, “PEN15” is able to take major life moments during puberty and make them hysterically hilarious. Whether it's Maya breaking the fourth wall to deliver a dramatic monologue or the entire cast performing an elaborate modern dance, the show communicates more with bold aesthetic choices than with dialogue alone. And, really, they have to be this creative. You don’t put 30-year-old women in binders and fake braces if you aren’t ready to take some seriously big risks.