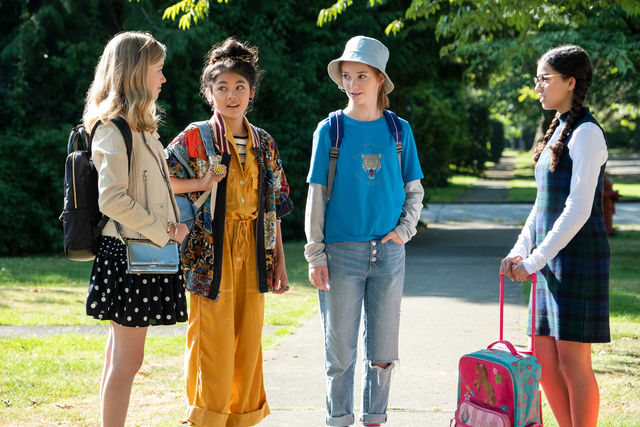 I feel vulnerable admitting that as woman in her 30s, I binge-watched the new Netflix show, The Babysitter's Club, over 4th of July weekend. Twice. Normally I would blame this behavior on quarantine and boredom, but the truth is, The Babysitter's Club is iconic. My sister and I read the books growing up and the 1995 movie came out when I was in elementary school, so for nostalgia's sake, I was compelled to check it out. Surprisingly, the storylines and themes are much more powerful in this new version: the show is inclusive, woke, and feminist. It’s not just a kids show about a club of girls that babysit — it's about growing up in a new generation as strong, intelligent, and creative women. It’s also funny. I am a comedian, and it takes a lot to make me actually laugh out loud instead of grin, but their exploration of a landline phone, references to Queer Eye, and Mary Anne’s dry comment about using funky yarn, when speaking to Claudia’s grandmother, as “how we rage” had me audibly chuckling.

Here are my favorite moments (some spoilers are ahead) that I want to share so you, too, can watch and celebrate the rebirth of this quintessential story. You’re welcome.

Kristy fights the patriarchy with her feminist quips

The tone is set within the first few words spoken onscreen. “All men are created equal? If he was such a genius, why didn’t he say all people?” Kristy recounts to Mary Anne about her discussion with her history teacher. “I raised my voice, not my hand.” Damn sis, get him.

When her teacher tells her to write a paper on decorum after her outburst, Kristy laments, “They would never make a boy write that essay.”

When she wants to channel power for her upcoming test, the fashionable Claudia admits, “I wore a super smart outfit… Ruth Bader Ginsburg chic.” I love her appreciation as a young woman for a strong, iconic hero, and I appreciate the way she interprets the look with her accessories. I’m going to try that next time I go to court to fight a parking ticket.

Stacey shows off her insulin pump

A true-to-the-original storyline is that Stacey is diabetic. However, in this version, Stacey says she's “not ashamed” of her disease and chooses to wear her insulin pump on the outside of her clothes. This message of not only accepting but embracing who you are (she bedazzles the pump) is a great example that I would have loved to see in the original when I was a kid.

In a scene that gave me happy tears, the quiet and shy Mary Anne steps in to advocate for a child that she babysits. During a hospital visit, the doctor misgenders the child, and Mary Anne is not having it. She asserts, “You’re making her feel insignificant and humiliated, and that's not going to help her feel good or safe or calm. Please recognize her for who she is.” It is a beautiful moment, especially given that Mary Anne was told earlier in the episode how her late mother would “always speak her mind, especially for those who can’t stand up for themselves.”

While the OG BSC was more focused on Mary Anne dating Logan or the business competition with a rival club, this new version isn’t holding back on addressing some real world issues. Claudia learns that her grandmother was once held in Manzanar, a Japanese internment camp. After hearing about the horrible treatment that went on inside of the camps, she tells her sister, “I don’t understand who could do that to a family.” In a mic drop moment, her sister answers back, “I don’t understand why they still do.”

Probably not the best time to set the record straight, but while officiating a wedding, Dawn’s aunt admits to being a witch. I guess she had to address it, since a little girl screamed at the pure sight of her. “She thinks I am a witch,” she begins. “Historically, the term witch has primarily been used to describe people, primarily women, who refuse to conform to society’s expectation of who they should be. We got a lot witches here…,” she says with a smile, to which almost every woman in the room smiles and agrees. Then, she adds — and this, I feel has a double meaning and could easily be missed at the end of such a powerful speech, as it seems like a throwaway line — “When a child tells you something, believe them.” Listen, Aunt Esme, I am going to need you to adopt me, because you are a brilliant badass. You can help me work on my articulation and I can help you with your timing.

There are a few important honorable mention moments, like at camp when Claudia advocates for the children who can’t afford the fancy art classes and Dawn advocates for the environment. There are also some honest friendship moments, like Dawn giving Kristy a care-frontation, telling her to recognize that they are both strong women with big personalities, Mary Anne encouraging Stacey to lay off the fuckboys (my word, not hers), and all the young women encouraging each other to set boundaries and speak up for themselves.

If these young women represent the future, I am excited for it. I would totally let them babysit my kids, except I am a witch who doesn’t have any!

Julia, A Muppet With Autism, Is The Newest Kid To Move To Sesame Street

Kelly Collette is a standup comedian and writer. She produces plays and comedy shows in the Midwest and loves to feature female leads. Find her on Twitter or Instagram @kellycollette.