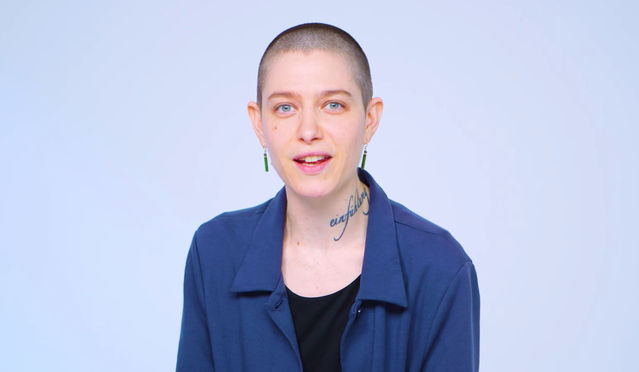 Asia Kate Dillon, the first ever non-binary performer to play a non-binary role on television, recently released an open letter to the SAG Awards Committee asking for the removal of the award show’s gendered acting categories.

A star on the Showtime drama, Billions, Dillon first made headlines back in 2017 when they asked that the Television Academy clarify their gender distinctions. “I’d like to know if in your eyes, ‘actor’ and ‘actress’ denote anatomy or identity and why it is necessary to denote either in the first place?" Dillon stated. As the definition of actor is "theatrical player, to do, to perform," many people in the industry regardless of their gender identity have opted to name their occupations simply as “actor,” which Dillon identifies with as well. "Binaries whether it be man or woman or black or white, they were created to separate us, to create an us and a them,” Dillon stated. “Without binaries, there’s only us. Which means we’re actually all equal."

Following Dillon’s conversations with the Television Academy, Dillion was nominated for a Critics Choice Award and was placed in the Best Supporting Actor in a Drama category. While Dillon later noted that they felt validated by the awards show’s move to nominate them in the category they most identified with, they felt that the situation should have instead been met with a call for change and a rejection of the gendered categories as a whole.

Eliminating gendered categories at award shows is by no means unheard of. In 2017, the MTV Movies Awards made the decision to get rid of gendered categories both for their movie and TV awards. That same year, Dillon opened up the show by presenting the award for Best Actor in a Movie to Emma Watson for her role in Beauty and the Beast. "Tonight we celebrate portrayals of the human experience, because the only distinction we should be making when it comes to awards is between each outstanding performance,” Dillon said.

Getting rid of gendered categories allows for an inclusive environment in which people of all gender identities can be judged upon their talent. Since the MTV Movies Awards moved to overall categories, the winners have remained fairly balanced between actors of all gender identities. While the MTV Movies Awards and other similar award shows operate off a voting system (meaning fans vote for whomever they think is most deserving of the award) one would hope that other award institutions, such as The Academy, would refrain from gender-biased decisions and choose the actor who gave the best performance overall. Although, the fact that #OscarsSoWhite trended for the fourth year in a row during the 2019 award show season proves that members of The Academy still have a long way to go in terms of overall inclusivity.

Still, the fight to get rid of gendered categories for all kinds of award shows should contiue be fought. At the beginning of June, the Screen Actors Guild Awards reached out to Dillon asking them to be part of the nominating committee for the 2020 award show season. In an open letter back to the SAG Awards on June 10th, Dillon asked that they removed their gendered categories first:

“Separating people based on their assigned sex, and/or their gender identity, is not only irrelevant when it comes to how an acting performance should be judged, it is also a form of discrimination,” Dillon wrote. “Not only do your current categories erase non-binary identities by limiting performers to identifying as male or female / man or womxn (which not all SAG members, like myself, do), they also serve as an endorsement of the gender binary at large, which actively upholds other forms of discrimination, including racism, the patriarchy, and gender violence.”

Dillon concluded the letter by asking the that the Screen Actors Guild send a message on diversity and inclusion to the acting industry at large: “ I would be thrilled to serve as a judge, provided you take immediate action to combine your acting awards into gender-neutral categories,” they wrote. “This courageous and overdue step from my union would send a wide message that SAG not only supports me but supports all its non-binary and gender non-conforming members."