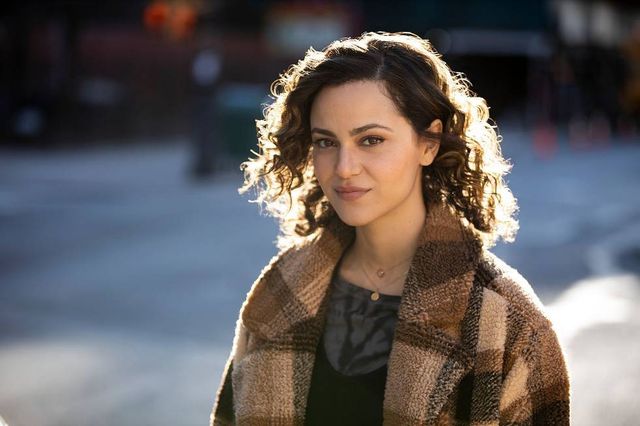 Dena wasn’t like the other roles May Calamawy had seen for Arab women.

When she auditioned for the role of Ramy’s sister in the eponymous Hulu series Ramy, she wasn’t playing a character that was fighting to protect her children or facing severe oppression. Instead, she was going out for the role of a 20-something law student who wants to move out of her parent’s place in Jersey. She’s annoyed by her brother and his entitlement as he explores his Muslim faith and tries to figure out what it means to be a “good person.” She experiences her own complicated relationship with her family’s faith. In other words, Calamawy says, Dena’s a “normal Arab girl.” Being Muslim is a part of Dena’s identity, but it doesn’t mean she’s constantly in situations of high stakes trauma.

Ahead of the second season's premiere, Calamawy talked with BUST over the phone about what it’s like to bring to life a character that’s been missing from TV for way too long.

This interview has been condensed and edited for clarity.

Ramy has garnered a lot of praise for bringing the stories of a Muslim family into the mainstream. What’s it like to be a part of a show that’s a rarity in the TV landscape?

It feels really special. I grew up in the Middle East, so for me personally, whenever I would come to the States, my faith was never anything I really spoke about and I didn't see it represented as much, especially not in a positive light. It affects you on some level. It's like, you want to be proud of what you are and you are, but then it feels like it's almost hard to be because you have to convince people. Now, it finally feels like we're a part of a show that's just universal. And I think that’s the biggest message. It’s not really about the faith. It’s more about how we’re actually all quite similar. And honestly, I feel so lucky to be a part of that.

I understand you worked with Ramy Youssef to help shape Dena’s character. What did that process look like?

I would say that in the first season I didn’t really feel like I could use my voice as much because this was the first bigger role that I had gotten. For this season, it was really special because he showed me an idea and I didn’t feel that excited about it. I actually had alopecia just last summer, and it was something that I had dealt with when I was younger and for some reason came back. I was so confused about it and it was very uncomfortable for me going into season two with it. It was something I definitely wanted to hide. And then one day, Ramy came to me and asked me what I thought about showing that and making that a part of the story. And it felt so weird. I was like, “No, no, no, I don’t know, I don’t know, I don’t know.” And he’s like, “No, that’s good! Like it’s just you and that resistance and that’s good and that’s what we should go with.” And then I was like, “Okay!” And I realized on my own, why do we try to hide parts of us that we think are quote-unquote ugly or that we're ashamed of? It’s those parts that are gonna actually help us connect with people out there. That’s what this is all about.

How was it actually acting out that storyline?

It felt really real for me. Some parts were really hard to do, like the shower part. Just being in the shower and watching your hair fall down, like more than normal, and then noticing the bald spot on the back of your head. It doesn’t matter how much work you do to be like, “Oh, I accept myself like this. I’m not in this field because of my looks.” It’s like, corona could be going on and you could be like, “Oh my god, I have a bald patch. It feels awful. What’s wrong with me?”

The show is rooted in Ramy’s spiritual journey, and season two takes that to another level. But your character Dena has a very different relationship with her faith. What do you think that contrast adds to the show?

A lot of times, and I'm not going to generalize, I'm going to speak from what I know — I see that men ended up getting away with so much more. They were able to make mistakes. They were able to have sex. And with women, you have to be a virgin, and it’s hard work keeping up that front. So what I noticed is that so many women end up moving away from their faith because they’re just tired. They’re like, I’m not feeling connected to anything, I’m feeling controlled. And if you make a mistake, you’re shunned. And I see that Dena’s in that place where she’s like, no, I want to do big things. I’m not gonna be [held back] by this religion, but it’s more limited knowledge of the faith that makes us feel that way. By season two, she’s starting to look at what’s missing. I feel like she’s at a place of being like, whoa, I’m being called, but out of desperation, whereas Ramy’s not even questioning his faith. He has that strong connection to it and grapples with, how do I do these things I still want to do but do good by my faith?

Dena has entire episodes in seasons one and two where she grapples with her sexuality and defining who she wants to be. What’s it like to explore those different sides of her?

It’s really transformative for me as an actor and as a person who grew up in the culture. In season one, she starts to try to examine what she understands about womanhood and wants to step out of that comfort zone to redefine her identity. I think that her wanting to explore her sexual identity is just really her control over herself. With that, there were parts of me that were like, oh, this is going to get so much backlash. But then, how many women out there actually want this because they're feeling so ashamed that they themselves tried exploring sexuality or that they themselves have had sex?

I think with this show, you can look at religion and you can justify certain things as wrong. For me, it’s about where you are in your evolution. You might end up doing something wrong and that ends up bringing you closer to God. And so I look at what Dena goes through and I’m not judging her, I’m not mad at her. I'm proud of her for wanting to go out and get that agency over herself and her body, no matter what mistakes she makes. In some ways, that gave me that permission in my own life. And in season two, there’s this constant need to get approval from her parents that I think it starts to just not be about her parents anymore. She wants to get out of the house and she wants to be independent. I felt that in many ways as well. I grew up really just thinking that a woman gets married and the man takes care of everything. And then I reached a point where I was like, “Oh shit. I have to do this for myself.” For any woman who can resonate with what I just said, I think finding that independence is really is the freedom. If you can do it, not for anyone else's approval, but just your own, then I think you're already free.

Patiently waiting with this ? #RAMY S.2

Were there any scenes you shot this season that stood out to you?

I love working with Hiyam [Abbass, who plays Dena’s mom], so anything with her, but especially when we got to bond in the car. Before, it was something I was frustrated about, like why don’t I have this one moment with her? So when we had that, it was so nice and fun to do and just felt like a breath of fresh air. She was someone that I saw 10 years ago in a movie, and I was like, “Whoa, I wish she could be my mom in something.” And the fact that it actually happened is really weird for me.

Yeah, I tell people this isn’t a one shoe fits all. It's one story. I've had a lot of friends get a little irritated and they're like, yeah, but don't you feel like it's backwards, like we're trying to get away from this girl that's like still having a tough time having sex? Like we're all past that and now that’s what’s being shown and that’s what people are only going to see Arab women as? I just know this is such a big step for us from where I came from and the roles that I've been seeing Muslim women do. This is just like a step in one direction, and I say, tell your own story, because we want to hear it as well.

If we've achieved anything, I hope that the show acts as like a catalyst for people to shine a light on their own stories and their idea of what it is to be Muslim. The doing of it is not easy, obviously, but no one doesn't want to hear your story. You just have to do the work to get to a point where someone's gonna listen to you. So I see the criticism as more just a hunger that people have to be like, “Well, this isn't all of us.” And I'm like, no, it's not. The show’s also called Ramy, it isn’t called Muslim-Arabs.

Do you have any dream plotlines for Dena?

I just want to see her stepping into herself more. Learning how to take more space, knowing what it means for her to really be a woman, and if that means being able to make her own decisions no matter what, and us seeing that, no matter who thinks they're right or wrong. Also, in the midst of her finding out who she is, maybe for her to find out her connection with her faith. I really do think that so many women get pushed away from it. If there is sort of a loving way to just relearn that, that could be inspiring.

Ramy is streaming now on Hulu. Check out the trailer for season two below:

Tags: ramy , may calamawy , muslim , television , TV , season 2 , representation
Support Feminist Media!
During these troubling political times, independent feminist media is more vital than ever. If our bold, uncensored reporting on women’s issues is important to you, please consider making a donation of $5, $25, $50, or whatever you can afford, to protect and sustain BUST.com.
Thanks so much—we can’t spell BUST without U.