Details
BY Elizabeth Winn
IN TV
Published: 04 May 2020 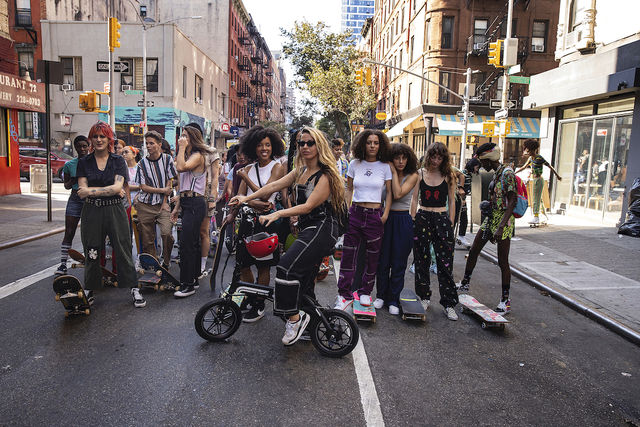 Moselle, a New York City-based director best known for her award-winning documentary The Wolfpack (2015) and her critically-acclaimed film Skate Kitchen (2018), said that the initial idea to do a film about girl skateboarders was born on the subway when she met Moran and Vinberg. When Moselle saw the pair on the train, a lightbulb went off in her head, and she could just tell there was “something there.”

“So I followed them off the train and I asked them if they wanted to do some sort of film project. They said yes,” Moselle told BUST. "That’s when everything began. When I met them, they were not the ‘Skate Kitchen.'"

At first, it was just Moran and Vinberg. Moselle said she couldn't find many skateboarders at first, so for her first skating-centric project — a short film called That One Day (2016) — Moselle and Moran went through Moran’s Instagram to find other girls who skateboarded. That's when they found Moonbear, Lovelace, and Russell. After filming That One Day, the five girls created their own all-female skate crew and called themselves the Skate Kitchen.

From that point on, the Skate Kitchen and Moselle were never far apart. After the short, the group shot a feature film, Skate Kitchen (2018), in which Vinberg, Lovelace, Moran, and Russell played fictional versions of themselves. The movie premiered at the Sundance Film Festival in 2018 to great success. Like That One Day and Skate Kitchen, Betty tells another new origin story about the same group of girls.

“It’s the same world and the same girls [as Skate Kitchen], but in Betty, they meet again,” Moselle said. “The arc of the show [follows] them meeting and starting a crew.”

The show's characters are from very different familial and socio-economic backgrounds, and are all different races. As a group, they have very different lived experiences. Vinberg's character, Camille, is Colombian. Moran’s character, Kirt, is openly queer. Moonbear’s character, who can’t be found without her camera but often goes without a top, is from a more traditional family and hides her style and sexuality while at home, but owns it when she’s with her girls. The show is “very diverse,” Moselle said. “I think that’s important to emphasize that.”

Moselle said that when she spoke with the cast, they knew there were certain issues they wanted to explore in the show. These included topics like the #MeToo movement and cultural appropriation in the fashion industry.

“One of them was like, what happens when like somebody that you know, that’s your really good friend, gets MeToo’d? How does that play out?” Moselle said. “I think that was something that we definitely wanted to work through, and [another was] just the dynamics of a subculture that’s dominated by males, and how does a woman navigate that?”

So, why the name Betty?

“‘Betty’ is a term, I think, that was used back in the ‘80s about a girl who skates or surfs,” Moselle explained. “But then it got a more negative connotation: [she's] a girl that hangs out with surfers or skaters.”

With her show, Moselle is reclaiming and redefining the label. Onscreen, “Betty” is more than a girl who hangs out with skaters, but a girl who can kickflip and drop in with the best of them. Betty makes a space for women in a male-dominated subculture, and tells the kind of story that's long been excluded from the canon of skateboarding films and TV.

In this sense, it all comes full-circle. "What really inspired me about the girls when I met them was [that they were] making space for more women in this community," Moselle said.

Tags: Crystal Moselle , Betty , HBO , Skate Kitchen , Dede Lovelace , Moonbear , Nina Moran , Ajani Russell , Rachelle Vinberg , NYC , New York City
Support Feminist Media!
During these troubling political times, independent feminist media is more vital than ever. If our bold, uncensored reporting on women’s issues is important to you, please consider making a donation of $5, $25, $50, or whatever you can afford, to protect and sustain BUST.com.
Thanks so much—we can’t spell BUST without U.