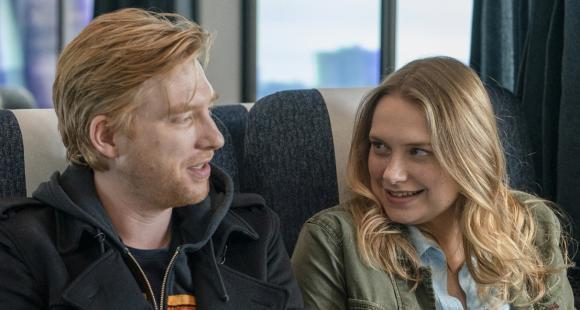 Run, HBO’s new rom-com thriller, should initially draw you in because of its creator and writer Vicky Jones and its executive producer Phoebe Waller-Bridge. Among other partnerships, these two worked together on Fleabag, and this new series also engages with comedy that acknowledges the darkness at humor’s edges. More than that, Run incorporates some of the escapist fluff that many of us need right now, but it denies firm genre boundaries with the flair of classic cinema.

The concept of the show starts from a traditional romantic comedy standpoint of unfulfilled adults in early midlife via Ruby Richardson (Merritt Wever), a wife and mother, and Billy Johnson (Domhnall Gleeson), a self-help guru. When they were in college, they made a pact, a spin on the if-we’re-not-married-by-40-we’ll-marry-each-other plan. This riskier version posits that if either of them texts “RUN” and the other responds in kind, they will run off across the country together. The language of this text, though, should signal some of the ways this narrative will turn, since “RUN” itself feels like both a threat and a warning when appearing as a seeming command on a phone screen; it doesn’t feel romantic. It is much more like old computer code, where the command run puts the program into action. Therefore, this story engages not just with romantic comedy tropes but also delves into the thriller realm, similar to movies like Date Night and the forthcoming The Lovebirds.

Although this story feels very contemporary, with cell phones buzzing at every turn to call Ruby and Billy back to their mundane lives, it is actually imbued with the ethos of classic Hollywood film that has long embraced the romantic-comedy thriller. Most notably this story nostalgically invokes Alfred Hitchcock’s North by Northwest (NXNW) while updating the narrative with current technology, strong female roles, and the acknowledgement of character complexity.

In Hitchcock’s 1959 film, Cary Grant stars as Roger Thornhill, a man on the run because he’s been mistaken for someone else. To flee his pursuers, he catches a train at Grand Central Terminal where he meets Eve Kendall (Eva Marie Saint). From then on, the thrills continue alongside an upbeat love story that leads the lovers to hang from the face of Mount Rushmore.

The first direct Hitchcock reference in Run occurs soon after Ruby and Billy meet up in the show’s pilot. Another passenger asks if they know each other, and Billy jokes that they are “strangers on a train,” referencing the title of another Hitchcock thriller. Hitchcock is on our writer’s mind, but the connections continue specifically to NXNW via the movement of the characters. In NXNW, the characters travel from New York to Chicago on the Twentieth Century Limited train. While that historical train no longer runs, Ruby and Billy are also taking a train along the same route.

Although they go on a NXNW-inspired journey, their sexualized language may at first seem disconnected from classic cinema. After all, we watch Ruby directly ask a stranger to come back to her room with her in order to make Billy jealous. But never underestimate the simmering sultriness of classic Hollywood. Eve makes a proposition of her own when she tells Roger, whom she has met only moments earlier, “It’s going to be a long night and I don’t particularly like the book I started. Do you know what I mean?” On the more comic side, there is a later famous scene when Roger is hidden in the closed upper bunk of Eve’s private room on the train shortly before the phallic train enters a tunnel. This, too, is similarly echoed in Run.

Other Hitchcockian tropes abound. Like Roger Thornhill, both Ruby and Billy are everyday people who get caught up in an exceptional narrative. Although they don’t begin as the typical “wrong man,” there is a bit of mistaken identity along with chase scenes and solid suspense. They, and we, think we’re watching a simple romantic story, but with all the drama along the way, are they running from their lives or for their lives?

The locomotive setting only heightens the drama, since trains are no longer associated with the elegance of early 20th-century travel and “red carpet treatment” but instead now connote a romantic sense of old-world charm and the classic locked-in feeling of a mystery where there’s seemingly nowhere to flee. In this way, there are moments when employing elements of Hitchcock’s story causes a shift in reception merely because of the passage of time.

Other differences are more overtly done to show the new ideas that Run brings. In NXNW, the tale is entirely focused on Cary Grant, with Eve getting little interiority, but Run incorporates Ruby’s backstory and emotions, presenting a more even-handed, dual focus on our two leads. By allowing Ruby to escape the fate of being a mere object for the male gaze, this adventure updates the lone hero’s tale.

With Run, Jones uses the female gaze to pay homage to the classics while still telling a fresh, contemporary story. Watch it for the love, the comedy, and the adventure.

Tags: Run HBO , HBO , Merritt Wever , Vicky Jones , Phoebe Waller-Bridge , thriller comedy , rom-com thriller , thriller
Support Feminist Media!
During these troubling political times, independent feminist media is more vital than ever. If our bold, uncensored reporting on women’s issues is important to you, please consider making a donation of $5, $25, $50, or whatever you can afford, to protect and sustain BUST.com.
Thanks so much—we can’t spell BUST without U.