Meet Richa Moorjani, One Of The Stars Of "Never Have I Ever": BUST Interview 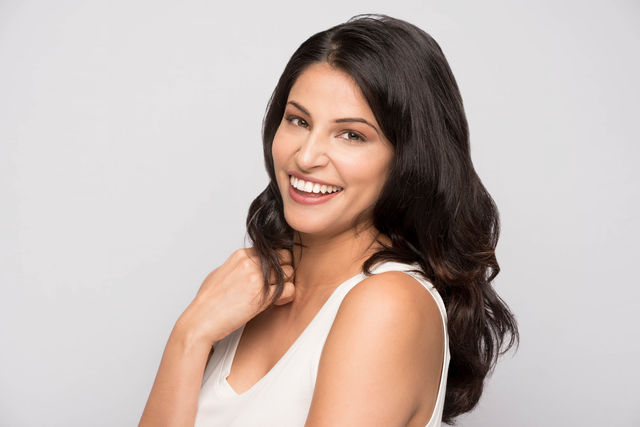 Perhaps when we need her bubbly genius most, Mindy Kaling, along with co-creator Lang Fisher, is gracing our (computer) screens with her new show Never Have I Ever. The show follows 15-year-old Devi, an Indian-American who is navigating high school and relationships with her two best friends following a traumatic time in her life.

BUST spoke with Richa Moorjani, who plays Devi’s seemingly perfect older cousin Kamala who is pursuing her Ph.D. while living in Devi’s home. Coming from a family of performing artists, this is Richa's first series regular role — she's worked with Kaling before when she guest-starred on The Mindy Project, but for Never Have I Ever, Richa beat out 15,000 other actresses for the part. To top it all off, she's also a trained Bollywood, Kathak, and Indian classical dancer (seriously, this woman is talented). Over the phone, she spoke about what it was like to tackle the role of the seemingly perfect overachiever cousin, the experience of creating such a fresh take on the coming of age story, and why this show is long overdue.

This interview has been edited for length and clarity.

When you first read the script, what stood out to you about the show?

First of all, it's a show created by Mindy and I love pretty much everything that Mindy creates. What stood out to me was that the show had not just one, but three South Asian female lead characters. And that's something that we just never get to see pretty much on American TV. And I love the fact that the three characters all have different perspectives and experiences that they're bringing to the story. I love the fact that it was a comedy too, there's so much that you can do with that. I also really related to the role of Kamala when I first read it, so all those things were super exciting to me.

Is Kamala the character from the show you relate to the most?

I do relate most with Kamala, even though I grew up here and like the character of Devi did. I always felt super connected to my culture and even though I grew up here, I spent a lot of time in India visiting family and I even lived there for a couple of years. Several years ago, I went there to pursue acting. Just like Kamala, I know how it feels to move across the world by yourself where you don't really know anybody to pursue a dream. We both also have very high expectations for ourselves. We both want to be perfect in so many ways. We want to need the perfect sister, the perfect daughter, and the perfect future daughter-in-law.

I saw in a past interview of yours that when you auditioned for The Mindy Project, you did not think the audition went well. I’m curious to know how this audition went for you.

The audition for this show was completely different. Not just from that, but from pretty much any audition I've ever had. Mindy put out a global casting call for the show on Instagram and she didn’t really say anything about what the characters were like or what the show was about. All it said was she wanted to open it up to the world so that she could get as many submissions as possible for these two characters because she wanted to make it as authentic as possible. All that said on the casting call was, she's in her mid-twenties and has an Indian accent. And so I was hesitant about even auditioning because I figured she’s going to get like a million submissions, mine’s probably just gonna get lost in the mix. So I sent in my tape and pretty much dropped all expectations of hearing anything back. The day right after my birthday, I got the call that I got the part, and I was driving somewhere so I had to pull over 'cause I was about to crash.

What was it like working on a show created and written by women?

It was amazing. There were so many women behind and in front of the camera. I just remember on set sometimes just feeling like it was so surreal having two showrunners and creators, Lang Fisher and Mindy Kaling, and then a couple of directors who were females. One of them was actually an Indian female director. And the show itself centers so much on female relationships, so I think it really helped and served in telling these authentic stories.

So without giving too much away, your character experiences being set up in an arranged marriage, but she also wants to date. Why do you think that this is an important storyline?

What do you think the power is in telling stories about the struggles and joys that accompany being a person who lives in multiple cultures?

It's just such a rare show with characters that you don't get to see very often. I know that when I was growing up, I never had a show like this where I felt like I saw somebody who looked like me or felt like I related to that character. When I was growing up, I always wanted to be an actor, but I never even thought that Hollywood was a possibility for me because it just, it just wasn't anything that was relatable to me. So I actually always wanted to be in Bollywood because that's the only place I ever felt represented. With shows like this, my hope is that the current generations of South Asian kids and future generations will feel like they're less alone in their experiences and that they're not the only ones going through those things. I think that shows like this are super important, and I hope this only inspires more shows and more stories like this.

How does it feel knowing a show like this is on a major streaming platform?

Honestly, it still hasn't really even hit me yet. I feel like just seeing the reactions that were getting before the shows even come out just with YouTube, it just shows how much of a need there is for stories like this and how much people want content like this. And that's super exciting for me.

What do you hope people get out of this show?

I hope that it's cathartic for people who’ve never felt represented before on screen, or they've never really felt like they related with characters and I hope it inspires people to create more projects like this. I think with Indian Americans (and I’m sure this happens with other cultures as well) who grew up here as first-generation kids, feel either disconnected from their Indian culture or they feel disconnected from American culture. And I hope that when they see this show, it helps them to embrace both those sides.

Check out the trailer for Never Have I Ever below, and catch it streaming on Netflix now!

Lizzo Goes Glam And Gets Real In Our Fashion Editorial: The BUST Archives

Tags: richa moorjani , lang fisher , mindy kaling , never have i ever , netflix , tv , teen , indian-american , south Asian , bust interview
Support Feminist Media!
During these troubling political times, independent feminist media is more vital than ever. If our bold, uncensored reporting on women’s issues is important to you, please consider making a donation of $5, $25, $50, or whatever you can afford, to protect and sustain BUST.com.
Thanks so much—we can’t spell BUST without U.