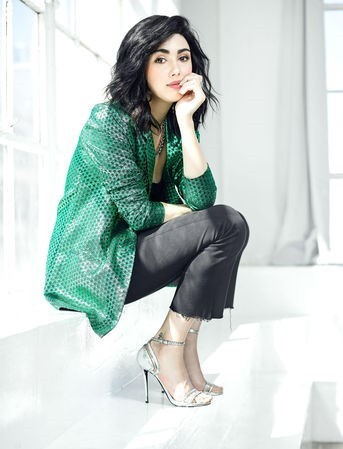 With the world on lockdown because of COVID-19, now seems like a perfect time as any to watch a show about a bunch of kids fighting the zombie apocalypse.

Alexa Mansour, crazy talented actress and musician, stars in AMC’s upcoming Walking Dead spinoff The Walking Dead: The World Beyond. Unlike other spinoffs in this series, The World Beyond explores a group of teenagers surviving the apocalypse by themselves. Set ten years after the outbreak, this show focuses on the first generation that grew up and survived the apocalypse. With past performances on Law & Order: SVU, How To Get Away with Murder, The Resident, Madam Secretary, and more, the half Mexican, half Egyptian, 23-years-old from Los Angeles breaksout with a lead role as Hope. Hope is a badass realist, with a secret heart of gold. This series will show how this new world can change people forever, for the better or worse. Due to the coronavirus outbreak, the spinoff will debut later this year. We definitely know what post-apocalyptic show we’ll be binge watching during this quarantine.

Mansour spoke with BUST over the phone about the new Walking Dead spinoff and building confidence as a musician and actress.

Do you think you could describe your character for me?

Hope is just not having anything. She doesn't really think that the world is going to amount anything. I don't want to say she’s depressed because she's not like on the ledge, or anything like that, but she definitely doesn't feel the need to try or put any effort into anything because she really does feel like the world is gonna end, so, what's the point? She's so sweet though she has a really big heart. And she tends to put everyone before her, because she feels so guilty about everything that happened in her past.

Do you think that a lot of young girls will relate to her?

Yeah, 100% when I first read the role, and I was going through the callback auditions, the pilot testing, it hit home a lot. I feel like it’s really close to home for me, because of the things that she goes through. I was bullied a lot growing up; so, that alone feeling—having that kind of defense mechanism—I really respect her.

Daryl Dixon, 100%. I feel like she is literally the female version of him, maybe. Maybe a little toned down, but pretty close.

Does she have a weapon of choice?

We have these poles that kind of eject out and it goes from being just like a normal baton to pretty much a spear like a knife coming out of the end. It's pretty gruesome. You definitely don't want to get into a fight with anyone with one of those.

When did you start watching The Walking Dead?

I'm a chicken, so I started it when I was like eleven. I think I watched the first three seasons and then I started having way too many nightmares so I stopped watching it. But now I definitely a big fan now.

What was your favorite Walking Dead moment that you have seen?

Man, this is gonna make me sound like a terrible person. There's that scene where Negan's like killing everyone and there's Glenn there and I can't remember who Michael Cudlitz played but his character was there (Abraham). But it's a gory scene and it's gross, and it's great.

How do you think that The World Beyond will differ from the other spin off, Fear the Walking Dead?

It just gives a new perspective of everything that's going on.In the other Walking Dead shows, we're seeing what's happening through the eyes of adults. So now you're kind of getting a sense of what kids would do, or young adults would do, when they're in the same situation. And it's a lot more blood and guts, but it's a lot more lighthearted than the other ones for sure.

The World Beyond follows young kids saving themselves and fighting for their own survival. Do you think this could be some kind of connection with this new wave of Gen Z activism, you know, that we're seeing today of young people trying to save their world by themselves?

I do, I really do. Even though these are totally different situations in real life, as opposed to like a zombie apocalypse. If you look at the characters on the show, you know, Iris and I, and how strong they are. I think it's gonna give a lot of younger people the idea, oh, I could do this too.

Do you think that given today with this virus that's spreading and causing a panic, do you think that this is also something that a lot of people could relate to and they might go to this show as an outlet or to find a sense of community?

I think it's giving people something to look forward to. It's kind of an escape from reality. Although there's like pretty freaky moments, ultimately, they kind of get through everything. I think that's a good way to look at everything that's going on right now, that it might be really, really bad right now, but, it's not always going to be like this. That's something a lot of people tend to forget. I even find myself not leaving my apartment. But, what goes up must come down. It's not going to be like this forever.

What was the hardest part of filming?

The hardest part for me was the night shoots, where I would have to be there all night. There's a scene that I had to stay over for. I was the first scene up and I was the last scene up and the day started at about 5pm. My last scene didn't start shooting until about 4:35 in the morning. And I had all that downtime in between scenes. And I think that was really that "make-it-or-break-it" kind of moment. And, then there were a lot of stunts and actions that I had to do.

I saw that you also have a very successful singing career. Is that also something that you'd like to expand on in the future or something like that?

Music was my first passion. I got into acting when I was younger, thinking that if I got into acting, people would know who I was and want to buy my music. Then, I realized, it's a lot harder to make it in the music industry than it is in the acting industry. When you go auditions it's either a yes or no. Whereas [with] music, you really have to start from the bottom and build your way up. And I was never a very confident person. So [I felt like], oh, no one's gonna come to my show. And then I started getting into acting and it just kind of happened. I definitely do want to get back into music. As soon as things calm down, I would love to get back in the studio. I write every day so...

You mentioned that it was a little bit hard for you to like gain some confidence in the beginning. Do you think that playing a character like Hope who seems to be so confident and sure of herself, has helped you?

That helped me so much. Playing a role every single day for six months, 12 hours a day, you really have to embody that person. So, a lot of the time I would just look myself in the mirror and be like "You are Hope, you are fine. Relax." And it helped, it really did. Just thinking about it and seeing how she goes about things and how she reacts to things, it made me want to be a better me...cheesy as that sounds.

In The World Beyond, who's your favorite character and why?

I have to go with Felix just because Felix is just like, savvy, sarcastic, but he's so protective. He will give you shit and all that stuff but he's there for you. He's like the annoying older brother that you never want to get rid of that you hate until you're about 30 or 40 years old.

Is there anything that you wish would happen in a future season?

Yeah, can Hope get a boyfriend? I mean, come on! Maybe a crossover, I think would be amazing to have characters like Daryl, Negan, and Carol, all of them just join in and have a big party. I think that'd be awesome.

Do you have any survival tips in case the world does become an apocalyptic situation?

Run! Run! Run like the wind. Don't look back. Take your family and run. And money doesn't matter, that's one thing that I've learned from The Walking Dead. Pick up a weapon. I don't know what my weapon would be. With a sword or a spear, you have to really come in contact. And I'm just not about confrontation at all. Guns are loud and attract empties [zombies].There were some scenes where I had to use a gun and I felt like I was gonna fly back for a second when I shot it. But I'm kind of screwed in like every way because I have the worst aim. I guess the cross bow would probably be the smartest.

Check out this trailer for The Walking Dead: World Beyond to hold you over until the premiere

This interview has been edited and condensed for clarity.