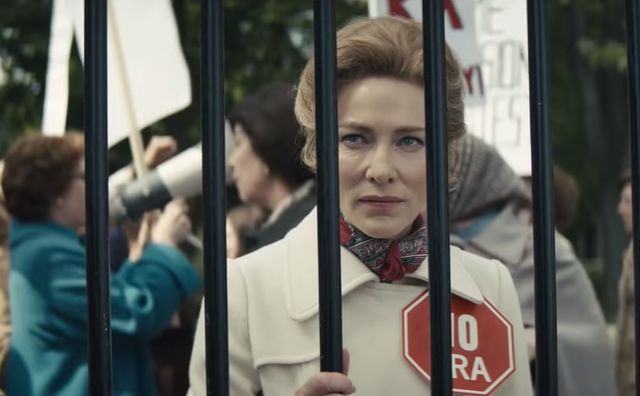 The United States, 1972. The Equal Rights Amendment has now been ratified by both the House and the Senate and will move on to state legislatures for ratification after dozens of feminists fought for equal rights and representation in the late 1960s. But nothing is this simple. The ERA, and the women fighting for and against it, still have a long way to go.

This is the backdrop of the new FX and Hulu series Mrs. America, which follows the ERA’s movement towards ratification with a focus on feminists like Gloria Steinem, Shirley Chisholm, and Betty Friedan, as well as one of the women’s liberation movement’s greatest foes, Phyllis Schlafly.

Written by Dahvi Waller of Mad Men, the trailer for this new drama showcases the highs and lows of the fight second-wave feminists took on again Schlafly and her “STOP ERA” campaign. By the looks of it, the title of each episode is dedicated to one of these powerful women, all of whom were very real. For those who did not live through this epic period of time, and because your history class probably did not pay as much attention to some of these feminist figures as one might hope, here’s a rundown of all the women being portrayed in Mrs. America.

Some might go as far to say that Phyllis Schlafly and the “STOP ERA” movement was singlehandedly responsible for turning the Republican party away from the ERA and halting its journey to ratification. In terms of Schlafly herself, think Serena Joy Waterford from The Handmaid’s Tale, but real.

A writer and activist, the start of Schlafly’s carreer was primarily anti-communist focused, but she eventaully became a staunch critic of the feminist movement. She publicly denounced the Equal Rights Amendment in a 1972 issue of her newsletter, “The Phyllis Schlafly Report,” and thus, her fight against second-wave feminism began. She believed that the ERA would create a “unisex totalitarian nightmare,” arguing that the amendment was anti-mother, anti-housewife, and against the traditional family. She detailed these beliefs in her widely popular book, The Power of the Positive Woman.

Schafly turned women against the ERA by convincing them it would draft women in the military as well as obligate them to provide financially for their families. Her “STOP ERA” chapters began to pop-up all across the country, battling against the “ERA YES” movement, which were crucial in barring the ERA from meeting its ratification deadline, killing it on sight.

Okay, so maybe we all already know who Gloria Steinem is (queen actually just turned 86 last week!). But for those who might not know all the details of Steinem’s role in the era of the Equal Rights Amendment, here we go.

Steinem was a pioneer of the feminist movement. After writing for a number of newspapers and working alongside radical feminist groups like the Redstockings in the 1960s, Steinem founded the National Women’s Political Caucus in 1971 along with three other feminists on this list. Here, as well as in Ms. Magazine, she spoke out and worked on behalf of a variety of women’s issues. As for her role in the ERA, she was key in speaking to the legislature and garnering support from lawmakers for the amendment.

In terms of Steinem’s take on Schlafly’s movement, she believed that the intense opposition in the bill was rooted in societal myths, perpetuated the patriarchy and neglected to acknowledge the importance of the women’s movement.

In 1969, Shirley Chisholm became the first Black woman to ever be elected to Congress, and went on to serve seven terms. Quite frankly, she was incredible—and there ought to be more about her in both history books and the wider American consciousness as a whole. But I digress. While Chisholm also went on to become the first Black woman to make a bid to be President of the United States in 1972, her role in fighting for the ERA was crucial.

In August of 1970, Chisolm gave the landmark speech “For The Equal Rights Amendment” to her fellow legislators on the House floor. Chisholm boldy spoke out about the injustices women faced under the law, outlining how the ERA would fit into the Constitution and “clarify countless ambiguities and inconsistencies in our legal system.” The Constitution the Founding Fathers wrote "was designed to protect the rights of white, male citizens," Chisholm said. “As there were no black Founding Fathers, there were no founding mothers—a great pity, on both counts. It is not too late to complete the work they left undone. Today, here, we should start to do so.” As we know, The Equal Rights Amendment was approved by the House of Representative just one year later.

Of course, Chisholm also played a huge role in founding The National Women’s Political Caucus (NWPC) and the National Organization for Women (NOW), both of which were at the forefront for the fight for equal rights.

In terms of second-wave feminism, Jill Rickelshaus’ name is one you heard thrown around too much. But she was still incredibly important in the ERA YES movement. Ruckelshaus was one of the seven founders of the NWPC, which dedicated itself to recruiting, training, and supporting women who sought to run for office at the local, federal, and state levels. Helping women get seats in office was a top priority at this time, as women needed representation in government in order to make strides towards equality under the law.

It is also important to note that The NWPC was a bi-partisan organization: it sought to help women from both ends of the political spectrum get involved in politics. This bit of information might play a key role in Mrs. America. Bill Ruckelshaus, Jill’s husband, was a Republican government official who is actually best known for resigning rather than obeying the order of President Richard Nixon to fire the prosecutor tasked with investigating the Watergate scandal. Jill also worked in the White House, and was head of the White House Office of Women’s Programs for a time. I think her character will be used to show the different dimensions of the second-wave feminist movement: Ruckelshaus likely had more moderate views, but was still a advocate for the ERA nonetheless.

Bella Abzug was another major force in the Women’s Movement. Another fighter for women in politics, her name takes yet another spot on this list and the list of founders for the NWPC. A lawyer and congresswomen for the state of New York, her campaign slogan in 1970 was "This woman's place is in the House—the House of Representatives," and she went on to found Women’s Equality Day in 1971. Clearly, she was a force to be reckoned with. And with nicknames like “Battling Bella,” “Hurricane Bella,” and “Mother Courage,” it is no wonder she is one of the figures remembered for pioneering the fight for equal rights.

While Abzug held a seat in the House, she fought hard for the ERA along with countless other equality acts. Abzug is even credited with co-authoring Title IX. Because of how outspoken she was however, she horrified conservatives. Especially the leading lady of Mrs. America, Phyllis Schlafly, who believed she had no respect for morality. This will surely be fun to see onscreen, and empowering for feminists everywhere, who can thank Abzug for her work and fighting spirit.

This journalist and activist wrote The Feminine Mystique, a work of feminist literature that gave language to the feelings dozens of women were having in the early 1960s, and is often credited with kicking off the second-wave feminist movement. Another founder of NOW, and author of their mission statement, “to bring women into full participation in the mainstream of American society now, exercising all the privileges and responsibilities thereof in truly equal partnership with men,” Friedan epitomizes what the fight for equal rights meant during the period Mrs. America is showcasing.

During the time of ERA YES, Friedan also worked to cofounded, the NWPC, helped create National Association for the Repeal of Abortion Laws (now NARAL Pro Choice), and organized the Women’s Strike For Equality, which took place in August of 1970.

While it appears that the show will primarily focus on the women listed above, a number of other prominent feminists from the era are going to make an appearence as well:

A feminist activist, film producer, and attorney, Brenda Feigen did it all. As vice president of NOW in the early 1970s, Feigen was tasked with organizing the U.S. Senate testimony for the ERA, which she worked on with Gloria Stienem, who testified on the Senate floor in May of 1970. While one would assume that this is the portion of Feigen’s career that will be focused on in Mrs. America, she did a lot for the feminist movement, including helping Steinem found the Women’s Action Alliance in 1972, which worked to provide resources to women’s centers and fight descrimination, as well as worked alongside Ruth Bader Ginsberg in that same year to co-direct the ACLU’s Women’s Rights Project.

Another great force of this era, Flo Kennedy was an activist, civil rights lawyer, and another leader in the second-wave feminist movement. Kennedy authored one of the first books on abortion, and is especially important due to her role in giving a voice to Black and intersectional feminism, which was deeply needed at the time of the ERA. It would take an entire article (and then some) to run through all the triumphs of her career. But if we’re focusing on the role she might play in Mrs. America, she was actively working with NOW at this time alongside the other women on this list. It also appears as though the television series might take place around the time Kennedy authored the powerful essay “Win With Women.”

Margaret Sloan-Hunter was one of the early editors of Ms. Magazine alongside Gloria Steinem and an avid advocate for Black feminism, civil rights, and LGBTQ+ issues. In the early 1970s, Sloan-Hunter actually traveled around the country to speak about racism and sexism at college campuses with Flo Kennedy. In order to bring Black feminists together, Sloan-Hunter created the National Black Feminist Organization and later established the Women’s Foundation in Oakland, Clalifornia with her daughter. It will be interesting to see if Mrs. America depicts the period of time when Sloan-Hunter and Kennedy were travelling around to college campuses, as gaining support from disenfranchised feminist college students was a big portion of the ERA YES movement.

Needless to say, with all these incredible feminists (and feminist foes) being portrayed on the little screen by this list of incredible actors, there is no doubt in my mind that Mrs. America is going to be a must-see for any feminist. The first episode of the FX and Hulu show officially airs on Wednesday, April 15.