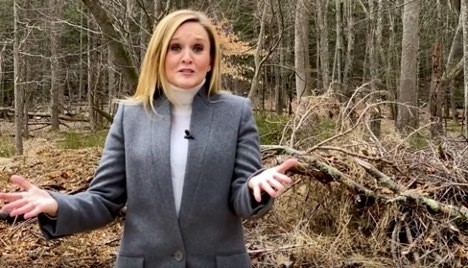 Quarantine has had many consequences, one of which is a look inside of the homes of late night talk show hosts, from Stephen Colbert to Jimmy Fallon. Full Frontal host Samantha Bee has also ditched her studio for safety, but has opted to take things outside rather than in, filming her episodes from her backyard in upstate New York.

On her first out of studio episode in front of a backdrop of trees starting to recover from the winter, Bee introduced the show, “I’m Samantha Bee and I’m in the woods right now, both metaphorically and literally!”

Bee’s husband, Jason Jones, is behind the camera, sometimes offering commentary, inevitably leading to witty banter between the two former Daily Show correspondents. Jones is also an executive producer alongside Bee for Full Frontal. "Really, the two of us doing it together is such a pleasure, this is like going back to our roots," Bee said in an interview with BuzzFeed News. "We don’t want to be doing the show in the forest, but if we’re in the forest we can do a show there. And we’re having fun with it."

Also helping with the show are the couple’s three children, rounding out the staff to a grand total of five, down from its usual 70. Once they’ve filmed the episode, she asks everyone to get off the (limited) WiFi so she can email footage to her staff for editing. For their hard work, she’s promised her kids adequate compensation. "My children definitely feel that they should be paid,” said Bee to Vanity Fair. “That’s a debate that’s raging in our household. And I don’t disagree. We have informed them that once normal life is restored in some capacity, we will buy them a present.”

In her last show before moving to the great outdoors, Bee performed to an empty studio, calling out the government's complete lack of adequate preparation for dealing with the pandemic. Although she no longer has her usual backdrop, at least we have her to give us important information in a way that doesn't fill us with an intense amount of existential dread.

Shooting hasn’t been a walk in the woods, so to speak. In the interview with Vanity Fair, Bee shared that she carries around a landline phone that beeps because the cell service is so spotty. She admits that the woods can look a little eerie (“Our backdrop will just look so much prettier when the trees start to come out, when there’s more greenery back there. Right now, it really does look like The Blair Witch Project.”) and that rain and neighbors chainsawing logs can be a bit disruptive to filming. Despite the challenges and the less than ideal conditions, Bee is relieved she can continue her work on the show.

“Having another place to put energy is very helpful to us right now, otherwise you can spend all day literally crying,” Bee told BuzzFeed News.

So, if like Bee, you’re trying to avoid spending your days crying, and you’d much rather be laughing, tune in to her show! The late night host has so far released two full episodes, in addition to tons of YouTube content.

Tags: samantha bee , work from home , broadcast , comedy , late night television , full frontal
Support Feminist Media!
During these troubling political times, independent feminist media is more vital than ever. If our bold, uncensored reporting on women’s issues is important to you, please consider making a donation of $5, $25, $50, or whatever you can afford, to protect and sustain BUST.com.
Thanks so much—we can’t spell BUST without U.