In Honor Of Hulu's “The Great,” Here Are Some Other Women In History We'd Love To See Onscreen 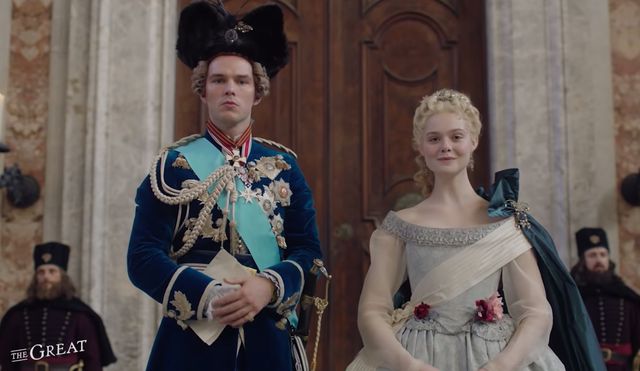 Who would have thought absurdist, feminist retellings of historical events would be the new hit thing in 2020? Not me. But boy, am I here for it. From the writers of the Oscar-winning movie, The Favorite, comes a brand new Hulu TV series starring Elle Fanning and Nicholas Hoult about none other than Catherine the Great. With Beckettian speech patterns that call back to the TV show’s cinematic predecessor and imagery reminiscent of BBC’s Masterpiece Theater, it’s basically every nerdy history buff's dream.

If you zoned out in your high school European History class, (which, let’s be real, why wouldn’t you?) here’s a little refresher on Catherine the Great. Born Princess Sophie von Anhalt-Zerbst in Poland, Catherine II was married off to the emperor of Russia, Peter III, at the ripe age of 16. Shortly into their marriage Catherine realized Peter was, to put it plainly, kind of an idiot. So what did she do in order to get power and shape Russia into an image she saw fit? Stage a coup-d'etat against her own hubby and seize the throne, of course. Essentially, she was a badass bitch who revitalized Russia at the time and became the longest running woman ruler in the nation’s history. Needless to say, the show is gonna be good, and we’re extremely excited to see Elle Fanning portray this icon.

As excited as we are for The Great, it seems to be only the newest in a wave of historical and literary retellings for the modern generation. Does anyone remember the 2006 film Marie Antoinette starring Kirsten Dunst? With overly-saturated colors, modern rock music and an overall absurdist tone, the film created a genre the likes of which the film industry had never seen before, but it didn’t really catch on at the time. Now, however, are we witnessing a renaissance of this style? Did Kirsten Dunst walk so Elle Fanning could run?

Another great example of a modern take on a historical figure that has come out recently is Apple TV’s Dickinson. While the show has the vibe of a modern teen television series, it is still very much a period piece following the life of poet Emily Dickinson. Rather than a completely, historically accurate depiction of her, however, the show adds flavor and loudly explores feminist and LGBTQ+ themes that one might not get in a run-of-the-mill Dickinson biopic. Autumn de Wilde’s new Emma. surely falls into the same category, and I would even go as far to say that Greta Gerwig’s spin on Little Women does as well.

While it appears that there is a surge in these kinds of TV shows and movies, we by no means want to stop! In fact, let there be more wacky, feminist reimagining of great moments in history and literature. Here are a few historical ladies we’d like to see get their spotlight on the small screen:

The good news is, there has already been a TV show about Joan of Arc (starring Leelee Sobieski of Never Been Kissed, no less!). The bad news is it only has a 10 percent on Rotten Tomatoes (Sorry, Leelee). This just means that there has to be another TV show about the famous soldier at once! And I want it to be weird.

Joan of Arc was convinced that saints and God came to her with messages about France’s future. She took it upon herself to fight at the king’s side and be the savior of their country. Of course, she was met with misogyny and doubt, but she eventually became commander of the French army and led her troops to a number of military victories in the 100 Years War. At the end of her life, she was captured by the Duke of Burgundy, charged for heresy, cross-dressing, and witchcraft, and burned at the stake. There is so much to explore from this woman’s life, especially if one were to put an open, modern spin on things and throw some dry, British humor in the mix. Someone televise this immediately!

Born Isabella Baumfree in 1797, Truth was sold into slavery at the age of nine alongside a flock of sheep. As an adult, she eventually escaped from her fourth slave-master with her infant daughter in the early 1800s. The slave-owner, however, had illegally sold her son to another slave-owner in Alabama. Truth returned to the South in order to sue the slave-owner and get her son back, winning the case and making history. But her story does not end there. Truth believed that the spirit came to her in the night and urged her to speak truth, which is when she got her famous name. From then on, Truth traveled around America making public speeches on universal suffrage, abolition, prison reform, and women’s rights. A kick-the-door-down feminist icon.

In 1851 at a women’s rights conference in Ohio, Truth stepped up to the podium and gave her notorious speech, “Ain’t I A Woman?” The best part about it? Apparently it was entirely extemporaneous. She literally made up one of the most famous feminist speeches of all time on the spot. Can you imagine what a scene depicting this moment would look like in this feminist style we’re seeing onscreen today? Sign me up.

I know this is about the science, but imagine the outfits in this one! But here I am getting ahead of myself. Ada Lovelace lived in the 19th century and was a pioneer in STEM. She’s considered to be the first ever computer programmer in history. She’s also the perfect candidate for one of these bizarre, modernized retellings for a number of reasons. For one, like I said, the costumes. The countess was constantly serving looks.

Additionally, however, she was a bit of an odd bird. Not only was she interested in math and programming, but she had a keen interest in psychology as well. She was intrigued by the human brain, thoughts, and emotion. And because it was the 1800s, there were still a lot of strange pseudosciences being explored at the time. She was particularly interested in mesmerism, a theory that though all living things, including human, animals and even vegetables possessed a force—yes, like in Star Wars—that could have physical effects and potentially even healing powers.

While the above would be great to explore in a television series on Lovelace, it would also be another obvious feminist hit. Women were very much not a part of STEM research at the time; Lovelace surely faced sexism and misogyny that would be interesting to explore.

I have decided that Komako Kimura is one of the coolest ladies of all time. Please do not argue with me. And, that being said, we need a TV show about her at once! Kimura pioneered the women’s rights movement in Japan in the early 20th century. She was a suffragette, actress, dancer, theater manager, and magazine editor. Can you see now how cool a TV show like this would be with bright-colored sets and feminist undertones?

Kimura, alongside two other women’s rights activists, founded the True New Women’s Association in Japan. She and her comrades not only fought for women’s rights on paper, but educated women to be strong-willed feminists with their lecture series and magazine Shinshinfujin. Kimura eventually visited the U.S., met Woodrow Wilson and the first woman member of Congress, Jeanette Rankin, and even marched in the 1917 Suffrage March in New York City.

The activists' work was criticized by the Japanese government. To get back at them, she put on satirical shows at her theater and when they asked her to stop, she simply threw even more shade and made the shows free. Eventually, she was arrested and acted as her own defense while on trial. How cool is that?

I bet you learned about Eleanor Roosevelt in history class, but did you learn that Ms. Roosevelt was a bisexual icon? Well, do I have news for you! We are already in need of a show that goes behind White House doors and sees the First Lady essentially being co-president. Seriously, Franklin D., who led the U.S. through WWII and created the New Deal, which saved us from the Great Depression, essentially didn’t do anything without checking in with Eleanor first.

The First Lady is known for her dedication to social reform and to standing up for human rights. She was particularly outspoken about civil rights, and made sure women journalists had the chance to come into the White House to report. But what I would like mentioned, alongside her other great accomplishments in a wacky, modern yet historically accurate retelling of her life, is her queerness. Many biographers who studied the life of Roosevelt believe she was in a relationship with a woman reporter named Lorena Hickock, called “Hick,” for short. Hick actually lived in the White House with Eleanor (and Franky D.) for a time and even gave Ms. Roosevelt a ring which she was not afraid to sport out in public. The two exchanged thousands of letters to each other. Pretty love-y letters.

While there would be quite a few gaps to fill in this sort of situation, I’m picturing an adaptation of the tale a la Dickinson. For the love of god, someone please get on this.

Now, to run through some honorable mentions real quick:

I know, I know, there have been depictions of Kahlo onscreen before (including the 2002 film starring Salma Hayek), but there has not been a colorful, absurdist, strangely modern, overtly queer and feminist retelling of her story that has been widely circulated before! C'mon!

Listen up! Paul Revere was a lying-ass b*tch! Okay, so maybe Paul wan’t, but your history book sure was. While Revere did famously warn Boston that the British were coming, Sybil, a literal teen, was the one who rode all around Connecticut and New York of the incoming fight. I don’t need a whole TV show, but can I at least get, like, a little YouTube short or something?

This Countess was an Irish politician, revolutionary, nationalist, socialist, suffragist, and the first ever woman elected to Westminster Parliament. I think that pretty much sums up why we need to see her on the little screen. Saoirse Ronan, where ya at?

This blues singer and lesbian icon might just have been one of the first people ever to have a same-sex marriage. The singer also used to perform at clubs as a drag king and had drag queen back-up singers and dancers during the Harlem Renaissance. Again, what more do you need to be convinced?

Ultimately, we’re all here for this resurgence of historical fiction on film and tv, as long as creators continue to make them over-the-top, modernly interpreted, feminist extravaganzas. Now, catch me binge-watching Dickinson for the next few weeks while I wait for The Great to save me from myself in May.

"Portrait Of A Lady On Fire" Is An Exquisite Look At Love, Art, And Intimacy