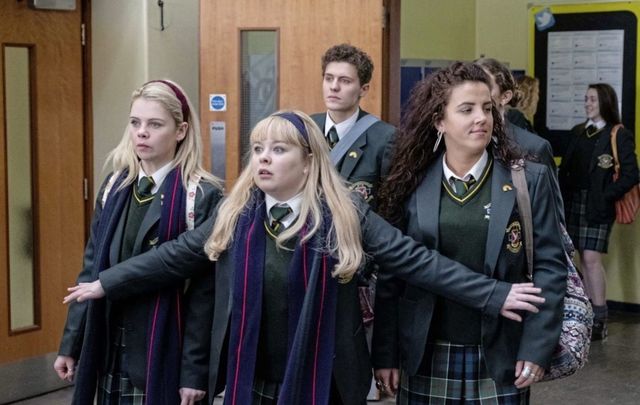 I’m going to go ahead and take a guess that checking the news and Twitter every two seconds is one, probably not amazing for your mental health and two, not filling these quarantine hours up like you might have hoped it would. Lucky for you, we have 17 shows that will fill the time and make your heart and your brain happy.

It’s no secret that BUST loves Abbi Jacobson and Ilana Glazer (both were our cover stars in 2015 and 2019) and after one episode of their show Broad City, it’s easy to see why. The best part of this comedy that follows two women living in New York is that you can jump in on literally any episode and you can get into the show. Available on Comedy Central and Hulu.

If somehow you’ve managed to avoid watching even a YouTube clip of this sketch comedy show, it’s time to change that. My mom credits this show with getting her through the stress of working the graveyard shift at the hospital and she might be the most stressed out person I know. So listen to my mom — watch this show! Available on Comedy Central, Hulu, and selected sketches on YouTube.

Like Key & Peele, Portlandia is comprised of sketches, but they build on each other as the show goes on. Portlandia follows Fred Armisen and Carrie Brownstein’s hipster Portland-caricature selves as they go about life in, you guessed it, Portland. It’s off-beat, definitely quirky, and absolutely hilarious. Available on Netflix.

There is an entire episode of this show where a dog falls in love with a dog walker. If that isn’t enough to at least leave you feeling intrigued, I don’t know what else to tell you. Available on Hulu and HBO.

Two 30-year-old women play middle schoolers among a cast of actual middle-school-aged actors. I cannot express in words how exquisite this show is. It had the potential to be disastrous but thankfully, the premise of Pen15 was perfect enough to work, thanks to the powerhouse acting of Maya Erskine and Anna Konkle. A depiction of prepubescence has never felt so viscerally awkward and delightfully accurate. Available on Hulu.

Adapted from The New York Times column, this show is a love letter to New York, and to human connection, which we are all missing right now! Based on true stories, it’ll remind you of the good in this world and make your heart feel a little less lonely. Available on Amazon Prime Video.

There are songs! Dancing! Important points about mental health! What more could you want out of entertainment? Truly, there’s never been a show quite like Crazy Ex-Girlfriend, so enjoy this highly original concept by writer and star Rachel Bloom and co-creator Aline Brosh McKenna. Available on Netflix.

Feel like exploring moral ethics and mortality against a candy-colored backdrop? The Good Place has got you covered. From creator Mike Schur (Parks and Recreation and Brooklyn Nine-Nine), the show follows Eleanor Shellstrop, an Arizona woman who died in a margarita mix-related accident and ends up in “the good place.” It all seems perfect — until she realizes she doesn’t belong. It’s only four seasons long, but because the showrunners ended it right where they wanted to, it has one of the best series finales of television. Available on NBC, Netflix and Hulu.

For a more traditional sitcom, check out Kim’s Convenience, which follows the day-to-day life of a Korean-Canadian family running their store in Toronto. The family is completely lovable and the show has an all-Asian cast, a demographic that is sorely underrepresented on television. Available on Netflix.

It’s an oldie but a goodie. Following the playful Jess, played by Zooey Deschanel, and her roommates and their lives in L.A., this show is always fun and always good for a laugh. Jess and her friends will feel like your friends. Also, there are something like seven seasons, so go forth and embrace the quirkiness. Available on Netflix.

This show will make you feel good simply by the virtue of its existence. I would have killed for a show that explores sexuality like this when I was a teen. While there’s definitely heavier subject matter in the show, you'll undoubtedly feel cheered up by the retro '80s vibes and the gorgeous English countryside, all mixed together with some adolescent trials and tribulations and a delightfully charming cast. Available on Netflix.

Speaking of cool retro vibes, have you checked out Derry Girls? Streaming on Netflix, this show follows a group of Irish teens in 1990s Ireland as they navigate the years of teenage rebellion and awkward mishaps. Available on Netflix.

I once heard someone on a podcast say you either haven’t seen an episode of Schitt’s Creek, or you’ve seen six in one sitting. This might be one of life’s essential truths. Catherine O’Hara and Eugene Levy team up again as the mother and father of a wealthy family that has lost their fortune, minus the town they bought as a joke — you guessed it, Schitt’s Creek. The family is rounded out by Annie Murphy and Levy’s real-life son, Dan Levy. I think this show exists to make you smile, and the more you watch the better it gets. Catch up before its series finale airs this April! Available on Netflix.

So maybe this show has the potential to make you stare at your pantry longingly, filled with bitter regret at the panic-induced quarantine groceries you picked up (catch me riding out this pandemic on Bagel Bites and 10 cans of black beans). But hey, who knows, maybe this show will give you the inspiration to make something of what you’ve got (unrelated: would black beans be good on Bagel Bites?). All joking aside, watching director Jon Favreau and chef Roy Choi cook and enjoy their favorite foods with other celebs like Gwenyth Paltrow and Seth Rogen is weirdly calming. Available on Netflix.

All the characters on this show are objectively horrible people. To state otherwise would be a lie. Despite that, it is one of the funniest shows (formerly) on television. Spearheaded by Julia Louis-Dreyfuss playing a power-hungry vice president leading a beautifully incompetent cabinet made up of cast members like Matt Walsh and Tony Hale, this show will not restore your faith in the government. But, it will provide some much-needed catharsis and make you laugh along the way, despite its lack of heartwarming moments, and so for that, I firmly believe it’s a feel-good show. By the way, there are a glorious 66 episodes of this show — which received a total of 67 Emmy nominations. Available on HBO.

If you haven’t jumped on the train of this CW telenovela, now is the perfect time. The show is definitely over the top — the main character is a virgin who’s accidentally artificially inseminated — but the fun drama will keep you hooked, allowing you a moment of rest from the drama of the real world. Available on Netflix.

Are these YouTube videos technically a TV show? No. Will the chefs of Bon Appetit make your heart feel light and happy regardless? Absolutely. Seriously, I’m convinced there’s not a single person in the test kitchen that isn’t extraordinarily charming. This channel has it all: cooking inspiration, witty banter between co-workers, and straight-up entertainment. Even if you don’t like cooking, watching Claire Saffitiz overcome her mental breakdown brought on by jelly beans will genuinely inspire you. The best part? There are hours and hours of content. Available on YouTube.

Taylor Tomlinson Talks Her New Netflix Special—And The Journey Leading Up To It: BUST Interview

Tags: tv shows , quarantine , feel good , binge watch
Support Feminist Media!
During these troubling political times, independent feminist media is more vital than ever. If our bold, uncensored reporting on women’s issues is important to you, please consider making a donation of $5, $25, $50, or whatever you can afford, to protect and sustain BUST.com.
Thanks so much—we can’t spell BUST without U.