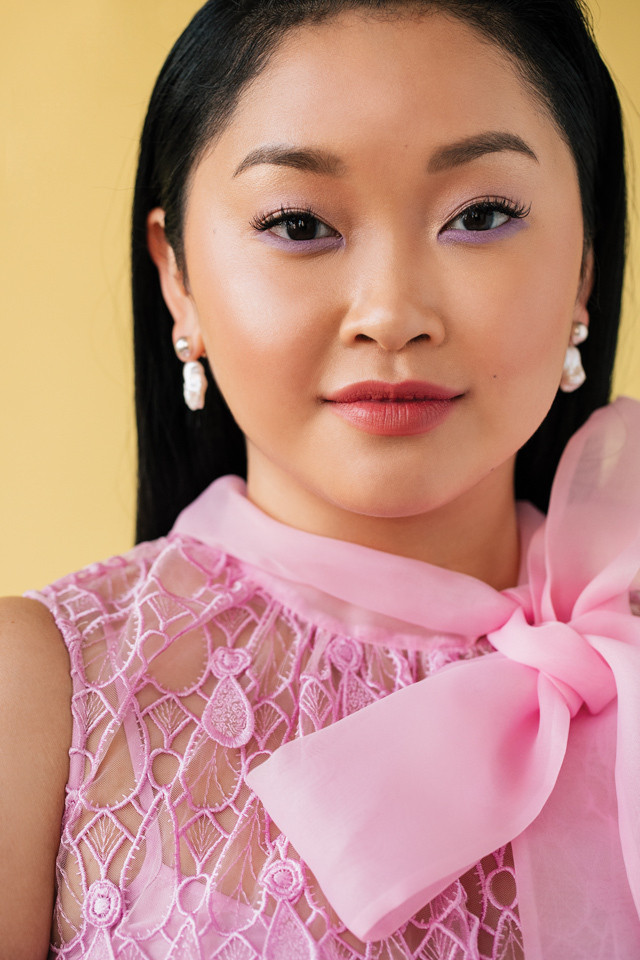 Lana Condor made hearts melt in To All The Boys I’ve Loved Before as the first Asian American leading lady in a young adult romance flick. Here, she chats about meeting Michelle Obama, snuggling puppies, and why everyone thinks she’s their best friend

WHEN LANA CONDOR landed the role of Lara Jean Covey in To All The Boys I’ve Loved Before, she had no idea that she would soar to instant BFF-status with her fans. Based on the New York Times best-selling young adult series of novels by Jenny Han, the teen rom-com was released on Netflix in August 2018. Condor’s character rocks cardigan sweaters and plaid, and is mortified when her little sister mails her secret love letters to five of her crushes. The film became an instant hit, and Condor went from 100K Instagram followers to 7.8 million (and counting). Thousands of fans took to Twitter with the hashtag #TATBILB, declaring their adoration for the film and fervently requesting a sequel. Wish granted. To All The Boys: P.S. I Still Love You (out February 12), and a third movie, To All the Boys: Always and Forever, Lara Jean, were both soon in development. And, recently, the actress announced on her Instagram feed that she’s working on a super-secret upcoming project with her actor-singer boyfriend Anthony De La Torre. With fans clamoring for Condor, she’s ready to deliver even more reasons to love her.

I spoke with Condor, 22, after she returned to Seattle from a life-changing trip to Vietnam. It’s the first time the actor returned to the country where she was born. At four months old, Condor’s parents adopted her and her brother Arthur from an orphanage in C?n Th?, Vietnam, and raised her in Chicago, Washington State, and New York City, where she studied classical ballet.

Condor took her first acting class as a high school freshman and adored it. Her family relocated to Los Angeles so Condor could pursue ballet and acting. And while studying at the Yale Summer Conservatory for Actors, she booked her first role in X-Men: Apocalypse as Jubilee, an Asian American X-Men comic book character. As we chatted (with adopted pup Emmy by her side), it was clear that the vivacious energy of Lara Jean Covey is also very much part of Lana Condor herself. We gushed about Lara Jean’s enviable on-set wardrobe, in particular a gorgeous sea foam green gown she wears. Condor is like a friend who is forever kind and gracious, even as she’s skyrocketing to fame. 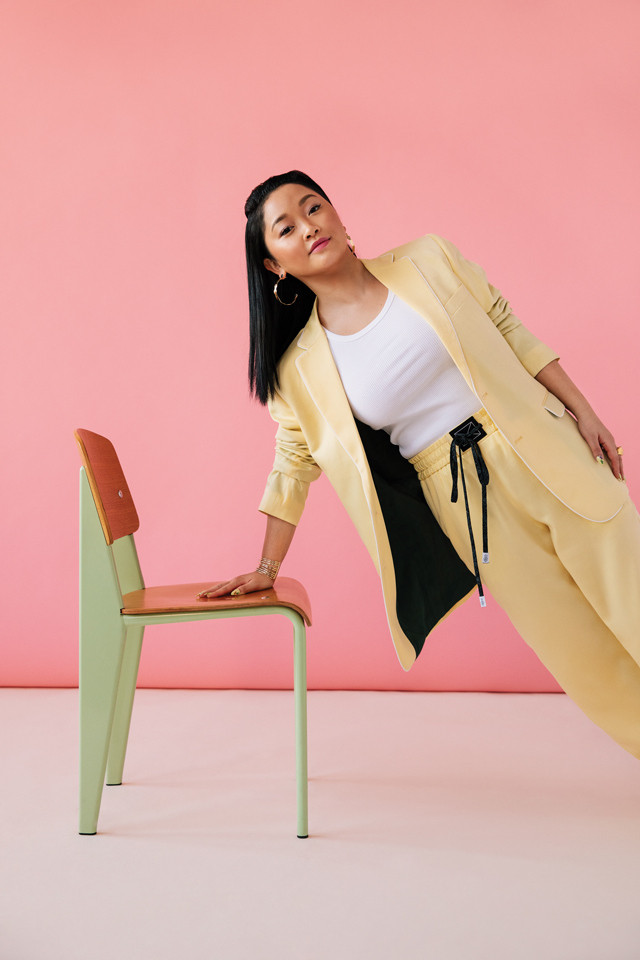 “The amount of young Asian American women and moms who have come up to me and said they feel seen and they’re so proud to be represented has been overwhelmingly moving.”

Lara Jean is true to herself. She follows her heart and is honest. Do you feel that she’s a young feminist in training?

Oh, absolutely. What I love the most about her is what you just said. She’s just herself. She likes the things that she likes, and she’s very unapologetic about it. She’s very old-fashioned and she doesn’t really ever try to change that. It’s funny that you say that because I was actually thinking that. But yeah, I would agree.

It feels like we’ve all adopted Lara Jean Covey as our heroine. Why do you think your character resonates so deeply with fans?

I think there’s a lot of power in letting yourself be lost and vulnerable and sensitive. She’s a very relatable character. When I see people on the street, they tell me, “I feel really close to Lara Jean.” Especially young girls. They just want to hug me. At first, it was kinda weird, like, “Why are these strangers hugging me?” And then I realized people genuinely think she is their best friend. That’s really, really sweet.

Every single day I feel honored that I’ve been given the opportunity to represent Asian American women, and the community in general. We did the first movie without knowing if it was even going to be bought; we were just making a little movie. They cast it true to the story and that was amazing. There was pushback from other studios, I think, when they were shopping it around. [Executives at other studios wanted to know] “Why can’t Lara Jean be a white girl?” But after the movie came out, the amount of young Asian American women and moms who have come up to me and said they feel seen and they’re so proud to be represented has been overwhelmingly moving.

During #AsianAugust in 2018—a hashtag that began circulating when the movies Crazy Rich Asians, Searching, and To All The Boys I’ve Loved Before, all starring Asian American leads, debuted to hit ratings—you said Asian actors are now in a position where they can’t be ignored anymore. What do you think is going to happen in 2020?

With all of these incredible movies coming out, people are taking us more seriously as whole people, which I think is really positive. Every year, there’s an event to support Asian American entertainers and people behind the scenes. When we all get together, you can feel in the room that there is change happening, and we’re so excited about it. I’m very optimistic. I hope the wave of awesome roles out there played by Asian Americans continues. It’s not a moment. We have to go on forever.

In To All The Boys: P.S. I Still Love You, your character volunteers at a retirement home, and I know you have volunteered in nursing and convalescence homes since eighth grade. Did you incorporate some of what you learned into your scenes?

When I first read the novel P.S. I Still Love You, I was like, “Wait, what? We work in a nursing home? I worked in a nursing home!” There are so many things about this story that I genuinely feel were taken right out of my life. I feel like [author] Jenny [Han] spied on me as I was growing up. It brought me back to when I volunteered at nursing homes and convalescent homes. I think I do really well with babies and old people.

“You know, I rarely think about being adopted, if at all, because my parents are my parents.” 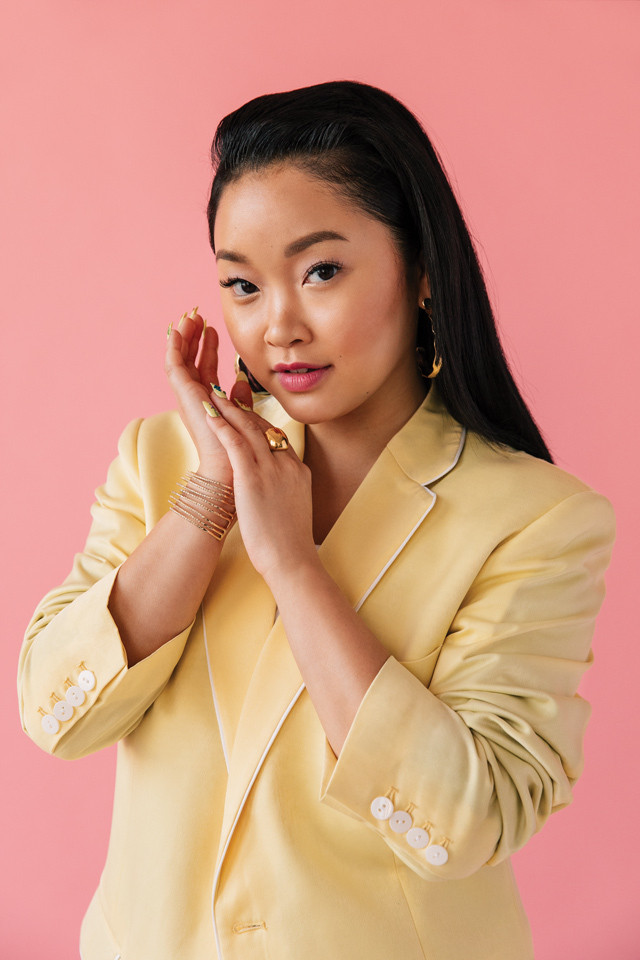 Your adoptive father, a journalist, wrote a Chicago Tribune article about adopting you and your brother in Vietnam. It sounded like such an emotional journey for both of your parents. How has your experience as an adoptee shaped you as a woman?

You know, I rarely think about being adopted, if at all, because my parents are my parents. I’ve only ever known one set of parents, and to me, I’ve always believed that love is thicker than blood. They have been the greatest parents in the world.

You just got back from Vietnam with the Obama Foundation. What did this pivotal trip mean to you personally, and as someone who’s passionate about young girls’ education?

We were there for more than two weeks. The first week, I went with my family, because a few years ago the manager at the orphanage where I was adopted in C?n Th? contacted me when he saw an article about me starring in X-Men: Apocalypse in a local Vietnamese newspaper. He recognized my last name. Cut to December 2019, we asked him if he would come with our family to find the orphanage. Ironically, the orphanage was no longer a place for babies, but a nursing home! I got to see where I spent the first couple of months on this Earth. I got to see where my crib was. [My parents said] the windows and curtains haven’t changed. I got to be in that space, and to be there with my family was such a full-circle experience. It was so amazing.

I also got to meet a few girls from C?n Th? who I sponsor with a four-year secondary school scholarship. That was major. And then I started working with the Girls Opportunity Alliance with former First Lady Michelle Obama. I saw firsthand girls who were genuinely impacted by education, and having a voice. I learned so much from the girls we sat with, and of course from Mrs. Obama, who is the greatest woman. When I met her, my eyes were hearts. She believes in the goodness in people and in our capacity to do little things every day that make the world better. It was the craziest experience, because not only did I get to go back to where I was born, I got to do it with the Obamas. It was the trip of a lifetime. I don’t think anything will ever top it.

You’ve wrapped on the third movie of the To All The Boys I’ve Loved franchise. What can fans expect from the next part of Lara Jean Covey’s story?

They can expect her to fully find her voice. I think P.S. I Still Love You is meant to be watched as the middle of a complete story. And what was so awesome about shooting three movies was I got to see her growth. She’s always made decisions based on her heart, but I think we start to see her use her gut a little bit more.

In a BuzzFeed video answering fan questions, you played with puppies, and then I heard you adopted one from the video. Is that true?

Emmy! Yes, she’s right here. I was dead set on adopting a puppy. I wanted one so badly. It’s never a convenient time, right? But it’s always the best decision you’ll ever make in your life. The night before, for real, I had a dream about a little brown puppy with blue eyes. And then when we got to BuzzFeed, they sent out the puppies in rounds, which is the most amazing experience ever. But Emmy was the first one they gave me and she never left my lap. She laid there and I just knew immediately. I got her the next day. I was doing all this press, but I couldn’t sleep because I was too excited about the puppy. And we’ve been in love ever since. 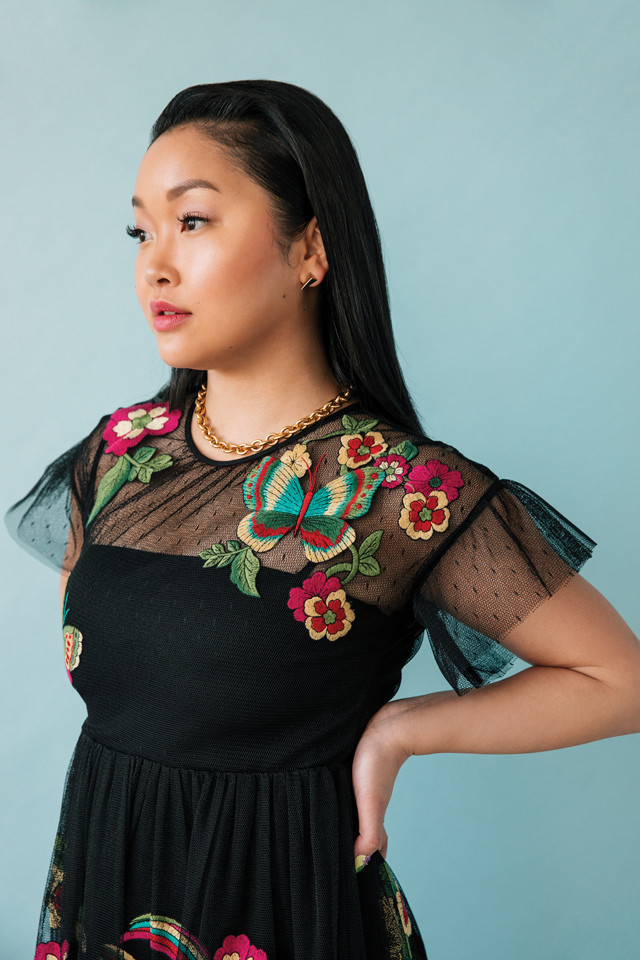 Sandra Oh, Before "Killing Eve": From The BUST Archives