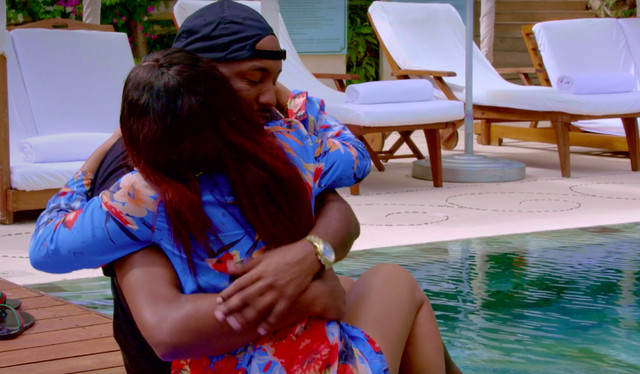 People across the world have dedicated their lives — well, at least 10 hours of their lives — to the hit Netflix series Love is Blind. Though Love is Blind is yet another heteronormative dating show, instead of putting the emphasis on each person's physical looks, the show focuses in on their emotions. Love is Blind is a kind of social experiment that asks whether anyone can fall in love, sight unseen — and whether a relationship can last once the two partners are eye to eye.

Filmed back in 2018 in Atlanta, GA, the contestants begin in these types of futuristic pods. They begin speed-dating each other through a wall, form intimate one-on-one relationships, and then propose. Then, the engaged couples finally meet and fly off to Mexico for a pre-honeymoon of sorts before coming back to Atlanta to meet each other's parents and plan a wedding.

In March 5's highly anticipated reunion episode, a year after the couples either said "I do" or "I don't," the cast and show producers gathered together one last time to follow up with where everyone is right now and decide, once and for, whether or not love is blind.

For the show's only bisexual cast member, Carlton Morton, love was blind — but he faced an entirely different kind of conflict on and offscreen.

In fact, Morton left the show in Mexico in Episode 4 when he and his then-fiancée, Diamond Jack, got into a heated poolside argument about Morton's dating history. Morton opened up to Jack about being bisexual, but because of his lack of honesty upfront, the couple couldn’t make it over this hurdle in their fresh relationship. A fight ensued, and both exited the show.

Since Love is Blind began streaming on Netflix February 13, both Morton and Jack reported they’ve received a lot of hate, and even death threats. Some tweets have called Morton a "disrespectful gaslighting narcissist ass bitch boy," and others have tweeted, "But... like... Diamond losing her mind over Carlton dating guys in the past.. she's coming through looking real biphobic."

“He said he was getting remarks and people attacking him. I’m getting the same thing,” Jack said. “I’ve gotten death threats as well. I’ve been called those names. I was really hurt by that.”

Though both Morton and Jack have received a lot of backlash since the show started streaming, Morton said he’s been more concerned about Jack than himself. He even reached out to Jack before the reunion episode, either around the holidays or her birthday, to apologize. He apologized again, onscreen, in the reunion episode.

Though he came to his ex's defense and took responsibility for the language he used against Jack, Morton found that a lot of Love is Blind's fans didn't really understand his sexual orientation—which points to a larger trend of biphobia and bi-erasure.

“Biphobia is a form of homophobia,” Dr. Chris Donaghue, a doctor of human sexuality, told Psychology Today. “They aren’t [entirely] separate.” Dr. Donaghue went on to say homophodia and biphobia feeds the harmful practice of bi-erasure: that is, when heterosexual or homosexual people deny a bisexual person's identity.

Homophobia, biphobia, and bi-erasure all lead to the creation of a lot of harmful bisexual stereotypes. Some of these stereotypes portray bisexual people as promiscuous or untrustworthy, while others suggest that bisexuality doesn't really exist — and that a bisexual person's sexual orientation is decided by the gender of their current partner. Morton, as the only openly LGBTQ+ contestant on Love is Blind, said he has faced some of these stereotypes himself, and several viewers of the show even guessed he might suffer from internalized biphobia, hence his hesitation to come out to Jack.

Morton shared that the “biggest misconception” he's encountered has been that some believe that “fluid” people are like rabbits, “hopping around, sleeping with everyone, talking to both parties at the same time and that we have no self-control sexually. I think it’s very unfair.” These misconceptions, he said, played a role in his hesitation to open up to Jack in front of a camera.

Though Morton and Jack both walked away from the show single, they left the show as friends. In the reunion episode both Morton and Jack admitted that they shared a lot of the same experiences after Love is Blind began streaming, and Morton even apologized to Jack for how he lashed out at her in Mexico. Jack accepted his apology but said she could never pursue a romantic relationship with Morton because of how he disrespected her, but their shared experience may just open the door to more creating LGBTQ+-inclusive reality dating shows and TV entertainment.