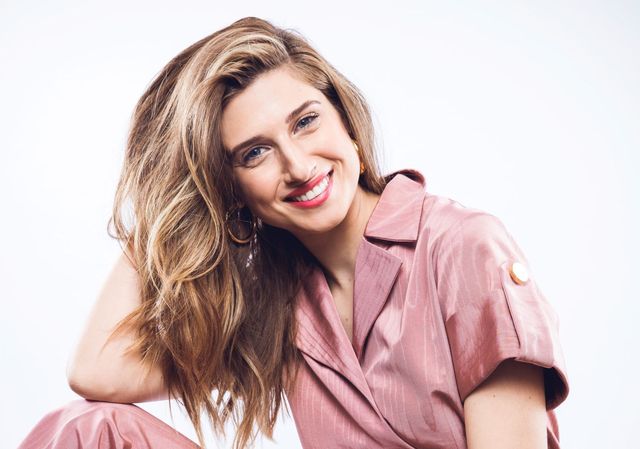 Following in the vein of college spin-offs like A Different World before it, Grown-ish, now on its third season, has been one of Freeform's great success stories. Grown-ish tackles real issues felt by today’s millennial generation, from student loan debt to the crazy political climate we’re all trying to make sense of. To top it all off, the show has the ultimate seal of approval from Michelle Obama herself: what more of an endorsement does anyone need?

Emily Arlook stars as Nomi Segal, a proud bisexual, Jewish young woman who isn’t afraid to speak her mind. For three years Arlook has captured audiences, representing marginalized groups and perfectly balancing humor and humility with her character. With this season’s jaw dropping plotline for Nomi, Arlook is reinforcing what is clear to many: she is a true star on the rise.

BUST spoke with Arlook via phone to discuss her breakout role as Nomi on the hit show, her upcoming film Big Time Adolescence, and the one genre she'll likely avoid.

How crucial was it for you being able to portray a character within this age group, and what do you think it means for young adults to have that kind of representation on TV?

It’s great. I think that time, being in college, for any young adult is such a transition in life going from high school and into the real world. And I think it’s a tough time where we’re looking for answers [to questions] like “Who am I? What do I want to do?” and having those giant, giant, giant life questions can also be very isolating and scary because they’re so weighty. To be on a show that tackles those questions is a privilege because I think, as an audience member, if you’re relating to that, then it’s a less isolating feeling. So it’s pretty great.

Since season one, your character has been given some pretty weighty plotlines from internalized biphobia to dating a professor to now a pregnancy. What are you most looking forward to when it comes to Nomi?

Oh my God, I don’t even know at this point. I don’t even know what else she can endure! I don’t know what’s left for her. She’s, like, almost done it all. I think what I’m hoping for her right now is where she’s left off. She’s back home. She’s figuring out what she wants to do with the baby, which is probably one of the biggest questions she’ll face in her fictional lifetime. So, I guess what I’m hoping for her is that she finds solace in whatever decision she makes and either way, whatever decision she makes—to place the baby for adoption or keep the baby, that’s a decision she’ll have to live with her whole life. So, I just hope she finds peace.

nomi's gotta do what's right for her. #grownish

Personally, one of the things I like about Nomi most is that she’s pretty secure with all of her imperfections. She knows that life is complicated and she has certainly had, as you’ve said, her fair share of ups and downs. What’s the main takeaway that you’d want the audience to have about Nomi's character?

I think kind of what you said; I like that. She, I think for the most part, is aware of her—for a lack of a better term—shortcomings and she’s really good about owning them and also changing. My favorite thing about her is her ability to change…that’s not the right word. Grow. She’s very open to growth and she is open to owning her shit…if I can say that word. [laughs] I like that about her.

Me too. That’s what makes her pretty badass. Are you at all similar to Nomi, would you say? Or do you all have a lot of differences?

Both. We’re super similar in some ways and super different in other ways. I would say, like Nomi, I really try and own my shit because I really like that quality in people so I really try and walk the walk, so to speak.

Nomi has been going through a lot, as we mentioned, over the last three seasons. What has been your favorite storyline for her so far personally?

I mean…. oh God, they’re all so good. It’s hard to pick a favorite life experience, you know what I mean? I like the professor storyline because I liked working with Kate [Moennig] so much, so that was just really fun.

I was actually going to ask about that too. Because Kate was obviously, about 15 years ago, in the [original] L Word, so now you’re kind of taking on this new wave of LGBTQ rep. What was it like being on set with Kate? Have you learned anything from her through your experiences together on set?

Yes! She’s become a good friend of mine. I love her so much. She taught me how to—how do I say this?—not always need to ask questions. Sometimes on set—or anywhere in life, it doesn’t need to be on set—I think as women, we want to ask for permission a lot and I’m so guilty of that. I want to ask for permission and “is this okay?” and “can I do that?” and Kate was really good at kind of showing me that you don’t always need to do that. Sometimes you can just do what you want and that’s okay and you don’t always need to ask.

One of the big core facts about Nomi and her character is that she is bisexual, and we honestly don’t see enough of that positive representation in media. When going into Nomi’s character, was there any pressure or concern about ensuring that her sexuality was represented well? Behind the scenes, wanting to deliver positive representation. Were there any hiccups or nerves going into it?

I think I’ll start by saying I give major, major credit to the writers and the producers of the show, so I think we all feel in pretty safe hands. And the writers’ room, in and of itself, is a very diverse room. It’s not a bunch of like, straight white dudes who are writing the show. It’s very diverse so everyone—to me, the experiences are drawn from a group of people in a writers’ room who are making sure that what’s being written is authentic. My safety comes from that. I’ll also add that I’m lucky that’s the case because, if not, I would be on high alert. And if there anything that I would have an eyebrow raised about, I would be more than comfortable to say something. I’ve just been lucky in that the show is very thoughtfully crafted.

It’s been so supportive. I feel so happy that anybody can see themselves in her. I think that’s all anybody kind of wants in life is just to feel seen and represented out in the world and if the character of Nomi can do that in any way, then that’s all I can ask for as an actress.

Going back to Nomi and this ginormous plot of having a child in her junior year. What was your initial reaction when you sat down at the table read and flipped open season three and BAM, there it is on the first page?

[laughs] Oh my God, I feel super psyched about this storyline and it was so interesting because they were teasing the pregnancy and didn’t say, you know, which character it was and all of that. It was so funny looking on the comments because nobody really guessed it was Nomi. And it was funny to me because a lot of people were saying, “Oh, it can’t be her. She’s gay.” First of all, no, she’s not gay. She’s bi. And B, even if she were gay, why couldn’t that mean she’s pregnant? And just because she’s bi, that doesn’t rule her out. So that brought me joy that it was her who was pregnant because it’s kind of like tearing down these stereotypes. Mothers look many different ways. And to add another face of what a mom can look like is a joy.

That’s fantastic. That’s what I thought as well, because I was seeing that online. I obviously follow everything Grown-ish-related on social media and seeing people say, “Maybe it’s Nomi but she’s a surrogate for another family” and all these other speculations. I was pretty happy to see that the show went in that direction, showing the roundedness of being bisexual.

Looking outside of Grown-ish, you’re going to be starring in Big Time Adolescence, which got rave reviews at Sundance—so congratulations on that! What can audiences expect to see in your character Kate?

[laughs] Kate is not like Nomi. They’re very different. Kate is more type A; Nomi’s definitely not type A. I would say what they have in common is they’re both kind of figuring out what they want to do with their lives so Kate’s trying to become—she’s going to law school. She’s shaking her childhood boyfriend, played by Pete Davidson, and finding that, you know, that time in your life when you have that childhood ex that you can’t quite shake. You can’t let them go and you bring them into adulthood but you know that you shouldn’t.

Is there much of a difference between working in movies versus TV shows? I mean, obviously TV shows you have more time over the course of different seasons to develop a character as opposed to a movie, which is just 90 minutes, tops. Do you have a preference?

They’re so different. TV…you know, I’ve known the people I work with now for several years so—not to sound cheesy because it’s true— we really do feel like a family. With movies, it’s this concentrated period of time, so there’s not a familiarity that you’re building. So in that regard, the TV atmosphere is nice. But movies are so much fun to make.

So, moving forward, would you be interested in going from in front of the camera to behind?

I’ve always written and it’s my—I don’t even want to say my second love, because it’s neck and neck with acting—it’s definitely something I’m pursuing. It brings me a lot of love and satisfaction.

That’s pretty cool. This movie is more so contemporary — so would you ever do different kinds of genres? Would you see yourself doing a horror film one day?

I’m not a big horror person at all, if I’m keeping it real. I don’t love horror so I don’t know. But maybe I’ll eat my words and do it — but not likely.

Nikohl Boosheri Of “The Bold Type” On What Makes The Show (And Her Character) So Important: BUST Interview