Here for The Right Reasons: Or, Why Are We Still Watching "The Bachelor"? 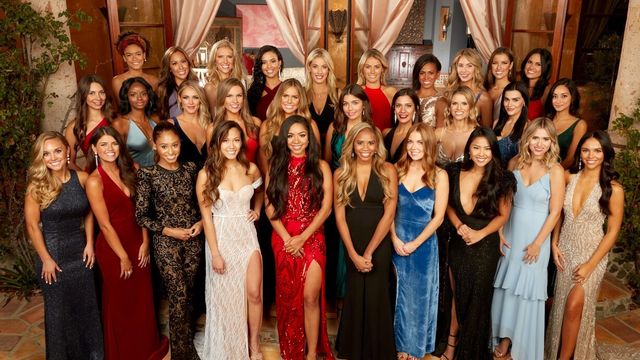 The event was fake. It was all media, all people who you invite to inflate your party when you can’t actually get any VIPs or A-listers to attend. There was a blue carpet, presumably for the number of Bachelor fan favorites we were told would be there, though it sat dormant for the majority of the event. The bar was open. The hors-d'oeuvres being passed around by casually dressed waiters (indicating that this wasn’t an outdated and stuffy affair) were much better than they needed to be, much better and therefore wasted on the myriad journalists and entertainment reporters gathered in the dimly lit Studio at the Freehand Hotel. Some of us had been driven there by chauffeurs. Who were they trying to impress? That’s the refrain I heard in my head for the whole night.

Why were we here? Who was this event for, really?

The event description was as such: Join Bachelor newlyweds Ashley Iaconetti & Jared Haibon as they host a fun and intimate evening with dating app, Plenty of Fish, to celebrate the premiere of their new video, Dine & Dish. We were promised to be able to meet with a psychologist, in order “to get tips on how to be as authentic online as you are offline.”

I only saw this psychologist once, as she was one of about five people allowed to walk the blue carpet.

Ashley and Jared arrived close to the event’s 6 PM start time, which I took as a sign that they were going to be the only big names tonight: you don’t have your “talent” arrive as other members of the press are still milling in. Former Bachelor Nick Viall was there too, inexplicably wearing a wallet chain. I would later see Nick walk past me in Williamsburg, as I sat outside stuffing my face with gnocchi at an Italian restaurant.

He was still wearing the wallet chain.

The event itself was essentially us interested parties talking amongst ourselves, taking advantage of the free food and drink. There was an area where a photographer took our new profile pics for dating apps. I’m in a monogamous relationship, so its intended purpose was unnecessary, but the shot proved useful for LinkedIn.

The video — the star of the show, which we were all there to see — was introduced by a head of marketing. “Plenty of Fish is, as of today, banning face filters,” he said with the same amount of gravitas usually reserved for finding a cure for some terrible disease. The disease, I guess, in Plenty of Fish’s eyes, is inauthenticity. So who better to counter that inauthenticity than two former contestants from The Bachelor franchise, the cultural behemoth operating under the charade that all contestants are presenting their most authentic self for television, a self that later becomes weaponized against you as it’s chopped up and repackaged for middle American consumption? It’s no big secret that the show, along with every other reality show, is heavily edited and sort of fake.

I had inadvertently chosen a seat behind Ashley and Jared, and I watched them watch themselves. The video was shot at their house (or someone’s house, at least) where they invited four different users of the site to have dinner. They chatted about modern dating and analyzed each other’s profiles. Months later, I checked in to see how well the video was doing. Only 6,000 views in about 3 months since the event. There was a blue carpet, hors d’oeurves, and chauffeurs, all for a video that wouldn’t even amass 10,000 views, let alone crack though the public psyche.

Why was I at this event? Free food, and fun anecdote, mostly. But the larger question remains — why am I, not to mention many smart, feminist women, still watching The Bachelor in 2020? A show that rests upon heteronormativity and antiquated gender roles, which have largely unchanged since its premiere in 2002? If we’re allegedly in a fourth wave of feminism and in the aftermath of #MeToo, why hasn’t the show changed with the times? And even more importantly, do we even want it to?

The Bachelor franchise has always been overwhelmingly white and exclusively straight. It wasn’t until 2017 that the series had its first (and only) black lead, Rachel Lindsay. The contestant pool has become more diverse in recent years, but still, everyone is thin, able-bodied, and conventionally attractive, not to mention in the realm of being financially stable. Money is never referenced, but class is certainly an unspoken element of the show. Contestants often spend thousands of dollars in order to look TV ready. Aside from the first night and the finale, contestants must provide their own wardrobe, hair, and makeup. Because of the time constraints of the show, many contestants quit their jobs in order to appear, where they’re not even compensated for their time. The best you can hope for is to recoup your losses by way of spon com ad naseum after the show ends.

The way I see it, the show exists in an alternate reality, where everyone is tanned and lithe from SoulCycle, where men still call the shots, where contestants living in a Handmaid’s Tale-like existence of not being allowed to have reading material focus all their energy on one man. Contestants cannot have any electronics, watch the news, or leave the house. The reason all they seem to do is drink and gossip all day is because that is all they are allowed to do. As Samantha Allen of The Daily Beast writes: "Watching The Bachelor is like being on an amusement park ride lined with animatronic figures whose heterosexuality dials have been turned up to 11. They are overclocked, operating well beyond their factory settings, and when they break down—which they often do—there is nothing more chaotically beautiful.” In other words, it's campy as hell.

I wouldn’t necessarily deem The Bachelorette more empowering to women, but at least everyone competing on the show is male, making the show into a real crucible of toxic masculinity and gender roles. I find no problem in making fun of these often aggressively straight men, though the occasional enlightened bro can come along (looking at you, Tyler C.!) Whereas when I watch The Bachelor, I do sometimes feel bad about mocking the female contestants. Like, girl, you’re really out here trying with that Drybar blowout and your Urban Decay “Naked” palette, and I respect that.

For a show about falling in love, its views on sex are shockingly puritan and anodyne. Sex is a natural component of being in a relationship, but the franchise usually handles it with little kid gloves. Everyone knows what Fantasy Suites are for (sex) but no one dares utter the word, lest ye be slut-shamed. During the "After the Final Rose" special, Andi Dorfman, the titular Bachelorette of season 10, was criticized by Nick Viall, who asked why she slept with him if she wasn’t in love with him (the phrases he actually used was “make love with” and “do fiancée-level stuff with,” which should give you an idea of the delusional men this show often attracts). Later, when Nick rudely crashed (I’m sorry, joined) Kaitlyn Bristowe’s season, they also slept together and faced an onslaught of criticism from viewers, including death threats. So it’s okay for Nick to sleep with both of these unmarried women, but they’re not allowed to do the same?

For some reason, Chris Harrison thought the best way to handle this was to read those very tweets out loud to Kaitlyn during her "After the Final Rose" special. I don’t have to explain why it’s shitty to force women to relive their trauma live on national television. A few years later, during this past Bachelorette season, Hannah Brown was slut-shamed by one of her finalists, Luke P. Luke P. was a born-again virgin and the season’s clear villian. To the credit of the rest of the men on the show, they all stuck up for her during the "Men Tell All" special, explicitly condeming his behavior as sexist. The bar for men these days is practically the floor, but it still felt somewhat like progress, especially only a few years after what happened with Kaitlyn Bristowe.

So yes, I have given you the numerous reasons why the show itself isn't feminist. But I'd still argue that the act of watching could be viewed as a feminist act. The show serves as a bonding ritual between generations of women. I was first introduced to the show by my mom, and now I watch it with my friends. It’s a chance for us to catch up, to swap horror stories of being implicated in compulsory heterosexuality and modern dating. There’s wine, there’s snacks, there’s a camraderie that extends outside of the apartment and into the Internet Discourse (following along on Twitter is essential). It’s like going to the nail salon, but cheaper. The Bachelor is essentially an American sport. There are fantasy leagues, there’s a final playoff. There are rules to be followed, and there is punishment when those rules are broken (see: Kaitlyn Bristowe’s season).

At the end of the day, the show reminds us heterosexual women of the qualities we seek to avoid in relationships: aggressive adherence to gender roles, the lack of anything substantial to talk about, airing out grievances in public. And in an age of dating apps and dick pics, perhaps there’s some part of us, past all our cynicism and despair, that finds the idea of old-fashioned romance appealing. But even more than that, maybe why The Bachelor franchise endures despite shifts in political consciousness is that it’s not actually about romance after all. It’s about bonds between women. Maybe the contestants didn’t come here to make friends, but we sure did.

Demi Lovato Returns to the Stage, But We Shouldn't Forget Her Twitter Beef with 21 Savage