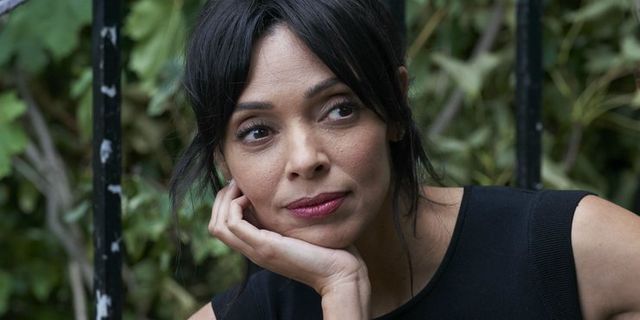 Most know Camille Saroyan, the head of the Jeffersonian Institute’s Forensic Division in the FOX hit TV show Bones, but not as many know the actress who played her: Tamara Taylor.

Since Bones ended in 2017, the 49-year-old Canadian actress has gone on to play parts in a number of movies and TV shows. But her latest role in the new Netflix series October Faction, which she describes as "like Mr. and Mrs. Smith meets Buffy the Vamipre Slayer," is probably the one she is most excited about.

A comic book-inspired show about a monster-hunting couple, Delloris (Taylor) and Fred Allen (J. C. Mackenzie), who traverse the globe to keep the balance of monsters and humans at bay, October Faction's story picks up when Fred learns that his father has died. This prompts the couple to pick up their lives and their teen children and take a road trip back to their hometown in upstate New York to handle Fred's father’s affairs. However, upon returning, the Allen family realizes the town isn’t as quaint as they remember it.

“[The show’s] so much deeper than it appears,” Taylor said. “I think it’s so much more ambitious than it appears. But I think the showrunner, Damian Kindler, is smart enough to know — [...] as a fan of graphic novels — it’s a fun medium to deliver a message.”

The monsters, she explained, are “sort of a metaphor”: The monsters represent people’s fear of the unknown and humanity’s pursuit of justice.

But the thing that’s really cool about October Faction is that there’s a bit of something for everyone.

“We’ve got the teen drama going on, which is for ‘real real’ — the angst of high school, and sexuality, and just figuring yourself out at that age — [and then] you’ve got the parents going through their whole crazy thing and trying to hide their identity from the kids and having their marital problems,” Taylor said. “You know, all the stuff that couple goes through when you’re trying to outrun your past. So it’s kind of like you got something for the adults, something for the kids.”

Being a self-proclaimed “sci-fi nerd” herself, Taylor said that after she read the first scene, she was in.

“I was like, ‘If this continues to be this cool, this is like a godsend.’ I love graphic novels and the notion of being able to tote—," here, she clarified, "I’m not a big gun fan, being Canadian — but the notion of being able to kick ass and tote a fake gun and kill monsters… I mean, are you kidding!? And have it be based on a graphic novel. That is so cool. It was like a no-brainer.”

Excited about the 10-episode series now streaming on Netflix, Taylor says that only time will tell whether there will be a second season.

“You know, I’ve consulted every god and that’s the only way, because with Netflix, it’s hard to know,” Taylor said. “They do their analytics and they are very quiet about it. They do know the number of eyeballs that watch one episode as opposed to three episodes as opposed to all ten. They know everything, which is interesting. I think that they usually tell shows from 4 to 6 weeks into their launch, so we should know soon if there’s a season two.”

Based on the comics written by Steve Niles and illustrated by Damien Worm, when Taylor got the first two scripts for October Faction in the summer of 2018, she did confess she got hung up on the comic's depiction of Delloris as a sharp-edged blonde with bangs.

“Delloris in the comic book is not brown,” Taylor said. “But she has bangs and I really kind of wanted to honor her look but I thought, ugh, if it’s so much like Cam [her character on Bones] it’s not going to delineate. It’s gonna feel like Cam’s just showing up in another show. So, I kind of had to change her up a tiny bit.”

However, though Taylor changed up a bit of Delloris Allen’s look, she tried to keep her “quirk.”

But, there were parts of the character that Taylor didn’t have to try to play. Taylor explained that as she began playing Delloris day-in and day-out, she found that she and the character had more in common than she originally thought.

“By nature [I’m] loyal, nurturing, and [...] I’m definitely bossy. I think I know how things should be done. So, definitely a few similarities between me and Delloris,” Taylor said. “I think Delloris, it’s funny because she’s all about family, it’s like family first and protecting her children and secondarily, what she does for a living is protecting human kind. So, she’s a nurturer, oddly, and not the most obvious nurturer either.”

Taylor is a nurturer too, and maybe in a not-so obvious way as well. Having worked with LA-based organization The Rape Foundation — an organization that strives to treat adults and children who have been victims of sexual assault with compassion in order to make the act of coming forward as a victim of sexual assault easier — in the past, Taylor shared that this is a cause that hits close to home for her.

“You know, I love my mom and I hope she’d be okay with this but, my mom has sort of had a very rough background with that,” Taylor said. “So knowing that there was a place that not only helped women but kids, [...] The Rape Foundation has done something beautiful. They’ve made something traumatic less intimidating.”

Now attempting to expand beyond LA, The Rape Foundation is training people in other states, and Taylor is proud to be part of this positive movement.

“I think ironically, [men have] had enough time to mess it up. I just think we’re going to be the clean up crew, a little bit. We need some feminine energy, some powerful feminine energy to kind of balance things out a little bit,” she said.