The B is for Bisexual: How "Grown-ish" Is Getting Nomi's Sexuality Right 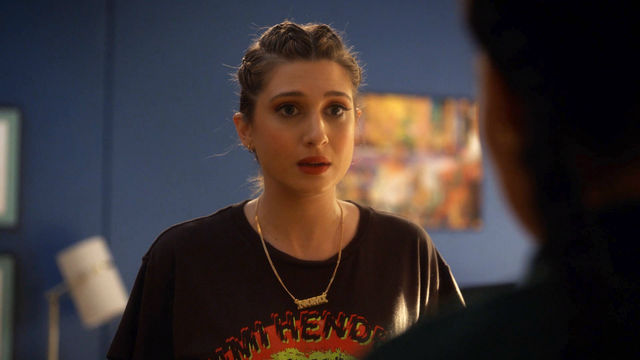 The buildup to Freeform’s newest season of Grown-ish kicked off with something of a bang. Promotions for season three tipped viewers off that there would be a baby on board. Fans took to social media speculating that perhaps it was the show’s main character Zoey (Yara Shahidi) who would be expecting, or maybe religious pro-lifer Ana (Francia Raisa). Theories in the comments sections sprang steadily, with some speculating that maybe it would be Nomi (Emily Arlook) becoming a surrogate for someone.

As episode one of the new season made clear, with her pregnant belly peering out from under her shirt at the girls’ new place, Nomi is the soon-to-be mother in her junior year of college. Grown-ish doesn’t seem to be shying away from giving Nomi her fair share of dramatic storylines and this latest season didn’t waste any time in kicking her character arc up another notch.

Last season explored Nomi in a controversial relationship with her Queer Culture instructor, Professor Paige Hewson (played by The L Word’s Katherine Moennig). This plot point was significant: it raised questions for both viewers and the characters within the show on whether or not this kind of relationship was acceptable. It was a point of contention between Zoey and Nomi, who repeatedly seem to find themselves at odds, but that’s another conversation for another time. This latest pregnancy storyline marked another speed bump in their friendship.

Teen pregnancy on television is not particularly new. Over the years audiences have seen characters choose to keep their child (like Gilmore Girls) or to put their child up for adoption (Like KC and Jenna. Any Degrassi fans out there?). As of now, Nomi has every intention of keeping her child. She tells Zoey that, after things went south with Professor Hewson, she hooked up with a guy one night and is choosing to keep her child because she wants someone to love her. Part of what makes this such a new kind of character arc is the fact that Nomi is bisexual: with her new storyline, Grown-ish is continuing to demystify preconceived notions in a bold way. Nomi is a complex, three-dimensional character that isn’t pigeonholed by a limited scope.

As media tries to accurately portray bisexuality, there have been some hits but more noticeably clear misses. Often bisexuals in mainstream media are overlooked or their validity is called into question by people who are unable to understand what it actually means to bi. With this character, Grown-ish avoids playing into the harmful stereotypes of bisexual people. They’re either made out to be overly sexual or their sexuality isn’t even named at all, an all-too-common practice known as bi erasure.

In this college setting, it would have been easy for writers to chalk her romantic and sexual attractions as just casual experimenting. And while it is important for people to have an open space to evaluate where they might be on the spectrum, it’s refreshing to see a young woman that knows precisely where she stands. She doesn’t fall into the straight-to-gay trope that completely disregards bisexuality as a legitimate sexual orientation.

Through Nomi, Grown-ish has been able to tackle the nuances of sexuality, even having Nomi confront her internalized biphobia (at one point, she proudly proclaimed she was bisexual to her friends but was seemingly freaked out when a guy she was interested in said that he had hooked up with other men in the past). Nomi is a character of conviction whose point of pride is being able to stand in her truth, even when it makes those around her uneasy.

Grown-ish’s treatment of Nomi’s bisexuality makes it clear that being bi isn’t a stepping-off point as some people may view it as. It’s not a layover to a connecting flight, but the destination for millions around the world.

Catch Grown-ish on Freeform at 8/7c.