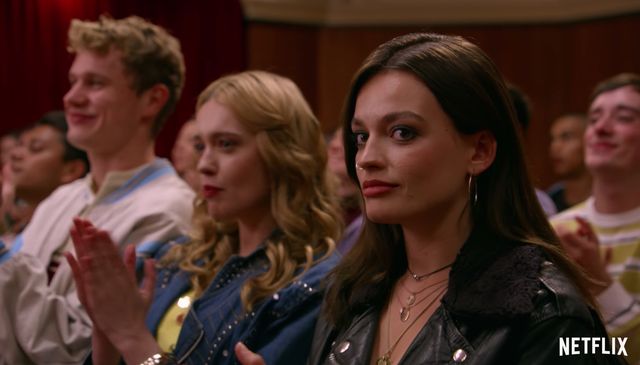 Warning: This story contains description of sexual assault and harassment.

Sex Education: It’s the Netflix Original that completely reimagined teen television as we know it. It's kind of like if every John Hughes movie, Charlie Bartlett and Skins had a baby, but written by a woman and with themes that are actually important to the 21st century. Not to mention, it’s the very definition of binge-worthy, feel-good television. Why, those who haven’t had the privilege of watching this masterpiece might ask? Well, because it’s the first TV show maybe ever that showcases the many facets and nuances of sex and growing up. What’s more, the drama/comedy hybrid tackles a variety of important themes other than sex like coming out, bullying, and mental illness, just to name a few. Season one of Sex Education completely and utterly won out hearts, but if it was possible, season two made us fall even harder for the English television series, especially because of some of the new themes they ventured to explore.

One of the storylines from season two that garnered a lot of attention was Aimee Gibbs’, one of the main women characters on the show. In the third episode of the season, Aimee experiences something that many women can unfortunately relate to: while on her way to school carrying a birthday cake she made for her best friend Maeve, Aimee is sexually assaulted by a fellow passenger on a crowded bus. She stands beside the seemingly normal man after exchanging a quick smile with him. Shortly into the ride, however, the man begins to masturbate and subsequently ejaculates onto her jeans. Aimee calls out to the bus about what is happening, but nobody does anything, and she quickly runs out in panic.

At first, Aimee brushes the incident aside. She describes it to Maeve as if it’s no big deal, but soon, Maeve convinces her that they have to go to the police station and report it. There, Aimee continues the try and write it off, but even the female police officer assures her that her feelings are valid and coming to the police was the right thing to do. The way in which sexual assault was dealt with in this episode alone says a lot about how much care and thought is put into the writing of the show’s more difficult themes, but Sex Education didn’t stop there. Rather than confining this issue to a one episode arc, Aimee grappling with the aftermath of her trauma becomes a running theme for the remainder of the season. In doing this, they added a new layer to a kind of storyline that is so often glazed over or skipped altogether in teen television.

Although Aimee at first thinks that she can handle returning to her regularly-scheduled life without a problem, the encounter continues to haunt her and she starts to experience panic attacks not only when she tries to ride the bus each day to school, but in other parts of her life like when she is being intimate with her boyfriend.

Never has a teen television series dealt with the theme of sexual assault and harassment in such a realistic, nuanced manner. This could be largely due to the fact that the creator of the series, Laurie Nunn, experienced something similar herself. Nunn was sexually harassed while on public transportation, and continued to experience panic every time she tried to ride the bus weeks after the fact. The only thing that made her feel better was sharing her experience on a feminist Facebook forum. Nunn stated that hearing from women who had experienced something similar to her made her feel “a bit braver,” and that is exactly what happens to Aimee by the end of the season, too.

In episode seven, all of the leading ladies of the show find themselves in detention together. Their teacher orders that none of them are allowed to leave the room until they can find something that they all have in common and can make a list of their shared experiences. After hours of being locked up in this Breakfast Club-esque setting with more to discuss about their differences than similarities, Aimee begins to cry. Why? Because she can’t get on the bus. She talks about how it's not the fact that she’s worried the same man will be on the bus when she tries to get on again, but the fact that he had a kind face at first. That he looked just like anyone else. “If he could do something like that, anyone could,” Aimee states. “I always felt safe before, and now I don’t.”

After sharing the story with her school mates, another one of the girls speaks up and shares her story about sexual assault. “It’s like they thought my body was theirs or something,” the teenager says after sharing her experience of being groped at the train station. After that, a domino effect ensues in which each girl shares her own experience of sexual assault or harassment: Getting catcalled, being followed home from work, receiving unwarranted nude photos, getting flashed at the public swimming pool. Each girl has her own story, and each girl has something thoughtful and comforting to say to the other after they speak their truths. The girls bond over the fact that sometimes, it can be hard to tell people what happened, how easy it is to belittle your own experience and how frustrating it is that men think they have this kind of agency over women’s bodies.

There’s not a single television series that has managed to not only depict a sexual assault and the implications that experience can have on a young girl in such a realistic manner, but the therapeutic sort of solidarity that can be shared between women when it comes to these kinds of issues other than Sex Education. After sharing their stories and finally getting to leave detention, the girls go to a junkyard to blow off steam in the best way possible: By smashing shit. “I’m angry that a horrible man ruined my best jeans,” Aimee says, ready to smash a glass vase with a baseball bat in hand, “and no one did anything and now I can’t get on the fucking bus.” What follows is a montage dedicated to the new-found friends completely demolishing the abandoned dump, laughing and letting their anger out along the way.

The episode concludes with one more showcase of solidarity in which Aimee shows up to the bus stop not only to find Maeve, but the other girls as well. The team help Aimee finally conquer her fears and ride the bus in comfort for the first time since the assault took place. Including this storyline in season two of Sex Education was so important, especially because so many young girls who have likley experienced something similar to Aimee or the other girls watch the show. As Viv, the brainiac of the girl squad, notes when they are all confiding their stories in each other, two thirds of girls will experience unwanted sexual tension or contact in public before the age of 21. What can alleviate some of the pain after the fact could be as simple as sharing experiences with like-minded womxn who have gone through similar events. Sometimes, it can make someone feel just the slightest bit better to know that they are not alone —in their experiences, their trauma, or on the bus.