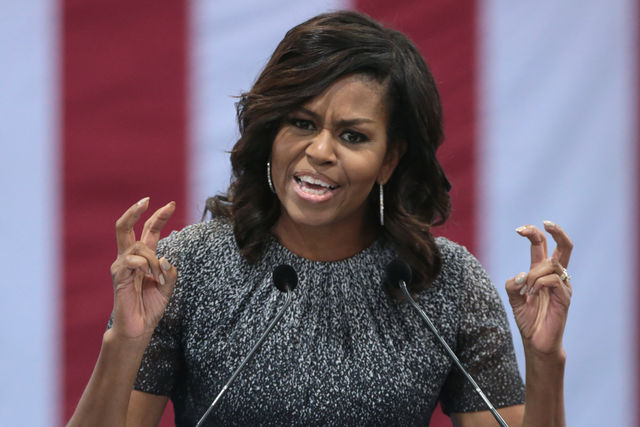 On January 7, Michelle Obama announced that she’s launching an Instagram IGTV reality series called A Year of Firsts that’s set to debut later this month. The series will follow four first-generation college students, Robert, Linette, Regan, and Haseeb, who hail from Washington, D.C., California, Alabama, and North Dakota. These college students are navigating their freshman year, and with Obama’s support through her organization Reach Higher, they will share their stories in the series.

The first year of college is exciting, but also a little nerve-racking. As a first-generation college student myself, I know how intimidating it can be to try to navigate through a new place and make new friends, all while trying to figure out who you are and who you want to be. That's why I'm so excited that @reachhigher is teaming up with @attndotcom to share the stories of four first-year college students: Robert, Linette, Regan, and Haseeb. Can't wait for you all to meet them and learn more about what taking that leap really feels like, day in and day out. Stay tuned!

Obama founded Reach Higher when she was First Lady because she was a first generation college student herself. The organization aims to help students get into college and to support them throughout their educational experience. As a first-generation college student, she said in a statement that she’s proud of the students and that, in “sharing their stories, they're helping others see that the ups and downs of the first year of college are something everyone goes through — and they're creating a supportive community for others facing similar challenges." Obama said that she “had to learn the ins and outs of entering higher education”, and that she knows “how intimidating it can be to take that leap and pursue your educational dreams.”

The series is going to be shown documentary-style. In the trailer, the students introduce themselves and share what they’re hoping for and how they’re looking to inspire others.

The series is being produced by ATTN:. The company's co-founder, Matthew Segal, wrote in the ATTN: blog that as “Mrs. Obama highlights in each episode, there are many hidden challenges to making it through college [...] the series will meet many students where they live—on Instagram—and share candid perspectives about how to overcome barriers. We're thrilled to be partnering with Mrs. Obama and Reach Higher to engage and inspire students to invest in themselves through higher education."

The series will run through June with six episodes total. Obama may have been dubbed 2019’s most admired woman, but she's already inspiring countless pepole in 2020, too.

Tags: Michelle Obama , Obama , Instagram , IGTV , College , First-Generation College , Feminism
Support Feminist Media!
During these troubling political times, independent feminist media is more vital than ever. If our bold, uncensored reporting on women’s issues is important to you, please consider making a donation of $5, $25, $50, or whatever you can afford, to protect and sustain BUST.com.
Thanks so much—we can’t spell BUST without U.