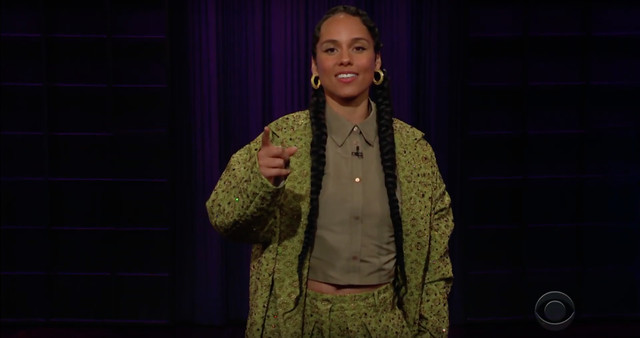 On Monday, the legendary Alicia Keys took over The Late Late Show as a guest host filling in for James Corden, and did so with the help of some powerhouse women by her side.

The Grammy award winner opened the episode with a monologue dedicated to the ladies. Keys declared the show as the first all-women episode of the late night talk show, with all-women guests, and an all-women audience to back them up. Rather than open with a depressing rundown of all the current events in the news, Keys decided she’d use her monologue to compliment members of her audience set to a jazzy downtempo beat. If you’re feeling a little jealous of the ladies in that audience, don’t worry—we are too.

Keys invited pop superstar Billie Eilish and beloved comedian Ali Wong as her guests Monday night. Keys gushed over Eilish as they sat next to each other on the couch, and Keys admitted she was a huge fan of her music. The host even covered Eilish’s hit song “Ocean Eyes’ on her Instagram four months ago. To return the favor, Eilish surprised the crowd by playing a recording of herself performing Keys’ hit song “Fallin’” at a talent show when the artist was 12. The two singers called it even by performing “Ocean Eyes” together in a soulful duet on the Late Late Show stage.

When Keys asked Wong of her past piano career, Wong responded that piano lessons were simply a right of passage in the Chinese community. She admittedly quit in second grade, which was the equivalent of “getting divorced the day after a super expensive wedding.” Wong may have ditched her chances at an illustrious music career, but her wicked sense of humor landed her right beside two music stars in the long run. Wong discussed how one of Keys’ songs made a cameo in her Netflix movie Always Be My Maybe (2019) just as her character took part in a tongue-filled comedic sex scene with love interest Randall Park. This led into a hilarious conversation about making out that put Keys on the spot.

Keys then invited Eilish and Wong to play the show’s recurring guessing game “Taller of Shorter,” in which players must estimate the heights of a group of people standing in front of them with their bodies covered from the shoulders down. In this round, however, all the nominees were female. Keys emphasized that the results of the game did not matter, because all the women were beautiful no matter their height or size. The game quickly became a showering of loving, body-positive affirmations from Keys and her guests. We only wished this positive display of femininity could last longer than just a single episode. We hope TV networks get the hint and follow this episode up with more female representation on their late night slots.

Header Screenshot from The Late Late Show on Youtube