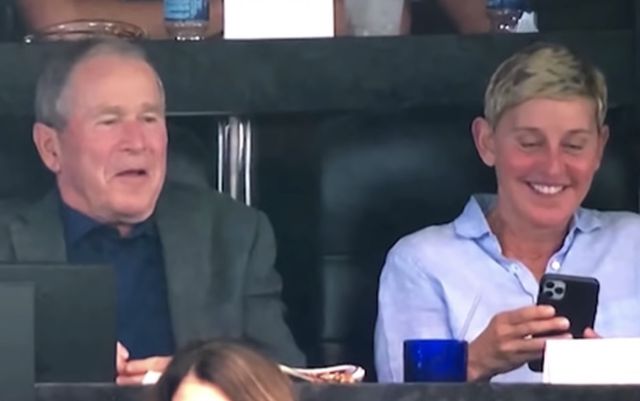 Last week, Ellen DeGeneres was shown at a Cowboys football game laughing with former President George W. Bush and to her surprise, got tons of criticism for it. Soon after, she brought up the video on her talk show and said that it was important to “be kind to one another”—as she says at the end of every show—and not only “the people that think the same way you do.” Since that show aired, DeGeneres has been receiving almost as much praise as criticism. Some celebrities, including Reese Witherspoon, Kristen Bell, and Blake Shelton have gone to Twitter to say that they love her and everything she does (Witherspoon and Bell’s tweets have since been deleted), while others have disagreed. These celebrities, including Mark Ruffalo and Susan Sarandon, who disagreed did not necessarily criticize DeGeneres, but they did say that what she said didn’t work for this kind of situation. Ruffalo tweeted, "Sorry, until George W. Bush is brought to justice for the crimes of the Iraq War, (including American-lead torture, Iraqi deaths & displacement, and the deep scars–emotional & otherwise–inflicted on our military that served his folly), we can’t even begin to talk about kindness."

Former President George W. Bush made no efforts to repeal the Don’t Ask, Don’t Tell policy, which banned LGBTQIA+ Americans from serving in the military and made it known that discrimination was allowed. That on its own is against who Ellen is as a person. To add to awful decisions made by President Bush, he also chose to invade Iraq, which did more harm than good. Over 130,000 Iraqis were killed because of this invasion, as well as over 4,000 Americans; it also caused the injuries of over 30,000 Americans (Newsweek).

Some celebrities including Elton John have spoken out in support of Ellen, saying that everyone has made mistakes, including daytime talk show hosts and former presidents. Although this may be true, it’s pretty easy to agree that the mistakes many famously kind celebrities have made are not comparable to the mistakes of a former president whose choices killed hundreds of thousands of people and kicked qualified Americans out of the armed forces based on their sexual orientation.

This isn’t the first time Ellen has “humanized” someone who didn’t deserve to be praised. When old tweets of Kevin Hart making jokes about beating his son if he identified as gay resurfaced, Ellen invited him on her show to forgive him as someone who is part of the gay community. Unfortunately, showing that he was friends with a rich, white, gay woman did not take away from the fact that he still said he would beat his young, black son if he was gay. Jokes can be funny without being offensive.

This kind of hypocrisy has not only come from Ellen DeGeneres; it’s something that has been shown in many well-known people in the media — people in movies and on television and on the radio that we have been told to admire. Why do we feel like we need to be listening to people like Ellen? Her brand of kindness and love has created not only an image she will never be able to get away from—as she has said in her Netflix special—but a clothing line for pets and humans and a furniture line. With sweatshirts that say “love” on them and cost almost $100, Ellen is selling a message that goes against her acceptance of people who have destroyed lives or even made fun of how people live theirs. Kevin Hart is turning around a conversation that was first about how he made fun of gay people into an attack on his character. How are we supposed to move forward as a society if those with platforms aren’t being held accountable for telling us right from wrong are going against what they believe is right? Instead, we’re humanizing former presidents who have caused wars that weren’t necessary, because our current president is literally insane. Until we learn how to not trivialize people’s mistakes, we won’t be able to decide when it’s the right time to address one another about being kind.

AfterEllen Is Closing, And It's A Big Hit For Independent Women's Media

Portia De Rossi On Eating Disorder Recovery, Coming Out, And Falling In Love: From The BUST Archives