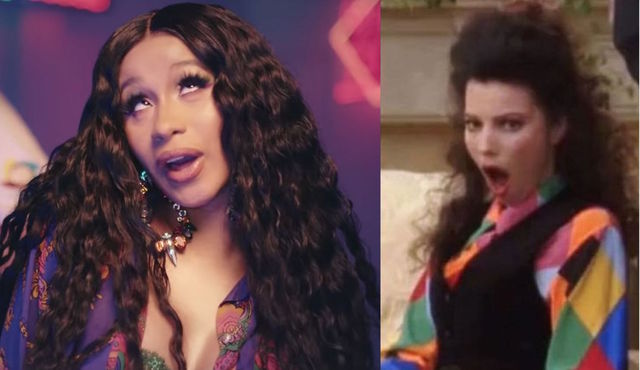 Last year, when national treasure Fran Drescher announced a potential revival of her beloved sitcom, The Nanny, we broke out the sequins and feathers in celebration! Now, it’s been reported that Drescher is in talks with Cardi B’s team regarding the superstar rapper starring as Drescher’s iconic character in a modern reboot. Drescher told ET that Cardi B “would be kinda like my top choice.” Given Cardi B’s natural comedic talent, we couldn’t be more excited about the casting choice.

The Nanny aired on CBS from 1993-1999, but its popularity continues with dozens of fan accounts dedicated to the show on social media, especially regarding the flashy girl from Flushing’s incredible wardrobe. Like Fran Fine, Cardi is no wallflower when it comes to fashion: her show-stopping ensembles consistently draw comparisons to Drescher’s costumes from the series.

While Drescher has not yet spoken directly with the Hustlers star, earlier this year Cardi B expressed her excitement about possibly heading the reboot on Instagram.

IM WITH IT !!!!This makes me so happy cause i love her ❤️

Whether Cardi lands the role or not, Drescher did mention that she’s intent on a reboot for the series as opposed to a revival with the original cast as their original characters. “We would have to write it for somebody else, which I would be excited to do actually. There’s a lot of opportunities to do something fantastic with it and bring it right into the 21st century,” Drescher told ET. For now, fans will just have to wait and hope that Cardi B becomes our TV babysitter, decked out in Moschino skirt-suits and Loboutins.

Header photos courtsesy of CBS and Cardi B, Bad Bunny & J Balvin - I Like It [Official Music Video]