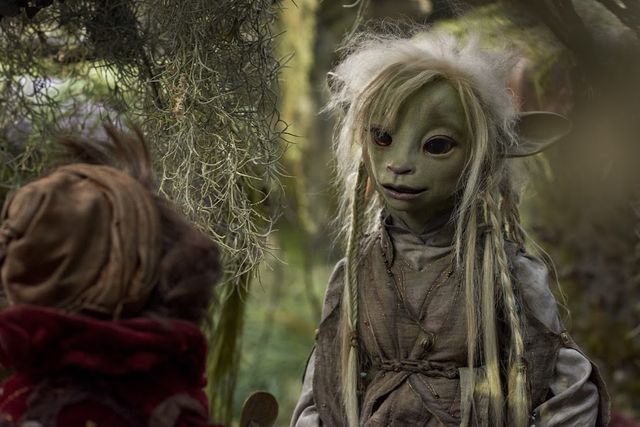 Jim Henson is arguably one of the most famous storytellers of all time. His creations – the Muppets, Sesame Street, and his films like Labyrinth and The Dark Crystal – have touched all our lives in one way or another. In the 1970s, Henson was on a career high, having succeeded at both the beloved Muppet Show and Sesame Street. During that time, he was interested in making a movie that used the craft of puppetry to tell a story for adult audiences, and in 1982, the world saw The Dark Crystal.

With the Netflix reboot of the famed cult classic premiering on Friday, the buzz and anticipation have been building up.The Dark Crystal: Age of Resistance introduces the story to a new audience.

BUST had the opportunity to preview the show, and there is a lot I can’t tell you and don’t want to spoil: it’s such a fantastic epic, my recommendation is that you cancel all your Friday plans and prepare to immerse yourself into the world of Thra. This new adaptation is a prequel to the original film. If you’ve never seen the 1982 version of the Dark Crystal, that’s okay. The story is so enthralling and detailed you don’t need to have seen it beforehand; however, the show may inspire you to watch the film after.

The show features a stellar cast, with Taron Egerton as Rian, a Gelfling castle guard of the Stonewood Clan; Anya Taylor-Joy as Brea, a Gelfling princess of the Vapra Clan; Nathalie Emmanuel as Deet, a Gelfling animal carer of the Grattan Clan; and Donna Kimball as Aughra, the embodiment of the planet Thra and an astronomer. A “darkening” is spreading throughout Thra, the living planet where Gelflings live, and the Crystal of Truth, a powerful object, is corrupted and guarded by the villainous Skesis.

In the 1980s, when the original show first came out, we were living in the Reagan and Margaret Thatcher era. AT&T was ordered to break up as a monopoly, and during that same time, environmentalists were battling with the Reagan administration not to make significant changes to the Clean Air Act. The Dark Crystal has always been a cautionary epic about the corruption of power, and the new show plays the same role today: interestingly enough, it seems we are repeating history: once again, we’re inhabiting a living planet which is currently dying at the hands of the most powerful who were voted to protect us.

In June of this year, the New York Times published the article 83 Environmental Rules Being Rolled Back Under Trump. It explains how the Trump administration, like the Reagan administration, also seeks to make changes to the Clear Air Act. As the Amazon Rainforest burns and our political leaders toy with democracy, an epic fantasy about how power corrupts is very much needed. Storytelling can inspire us to do great things; stories about those who feel powerless rising to the occasion are more necessary and relevant now than ever.

It is easy to get lost in The Dark Crystal: Age of Resistance: the story is beautifully written, and the gorgeous detailed craftsmanship and puppetry are outstanding. Throughout the 10 episodes of the season, you almost forget that these are puppets voiced by great actors. Craftsmanship in film has become an incredibly rare treat given our current age of CGI, and the puppetry in this Netflix special honors Jim Henson and the incredible world he helped build in 1982.

Although the show is exquisite, it is not an escapist show. It is impossible to watch the series and not see the human race. When the protagonists are seeking to save Thra at times, it feels like the television is speaking to you. Was it the intention of the current Henson company to make the film allegorical to our ongoing struggles against the powerful in a race to fight back against ever-growing climate change? Perhaps.

When Henson created Sesame Street, he used puppets to help prepare all children for school. He’s always used storytelling as a way to save the world, and this series is sending a new kind of message to viewers—an important one. The Dark Crystal: Age of Resistance is an inspiring epic that proves the power of storytelling and may very well inspire some to also change the world.

Dark Crystal: Age of Resistance will air on Netflix on August 30.