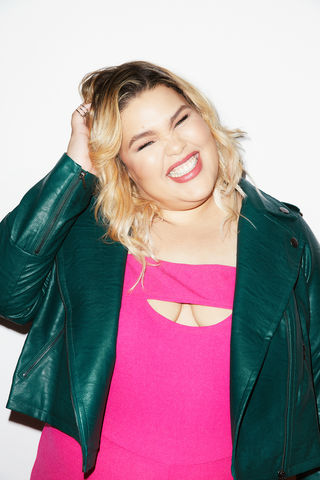 Netflix recently dropped the third season of GLOW. Created by Liz Flahive and Carly Mensch, the loosely based on a true story series, follows the Gorgeous Ladies of Wrestling, a group of former actors, models, dancers, stuntwomen, and an ex-soap-star who started their own professional wrestling promotion in 1985. Starring Alison Brie, Betty Gilpin, Marc Maron, and Britney Young—among other talents—the comedy series brings us into the middle of the ring and behind the scenes. It explores the lives of the women who became underground wrestling icons for their over-the-top characters and gutsy performances. But after finding their footing in LA, the cast is heading to Vegas in Season 3. Young’s character, Carmen, comes from a wrestling dynasty and her family never believed she had a shot in the industry. But GLOW’s fanbase immediately fell in love with the charming, defiant underdog.

We spoke to Britney Young to hear about what’s in store this season, what’s special about GLOW as a series, and what’s next for Young herself.

I love your character Carmen on GLOW. She’s clearly the fan favorite of the series. I’m curious, how would you describe Carmen?

Thank you! Well, Carmen is ultimately the biggest sweetheart. She very deeply cares not just about GLOW the show, she really cares about these women. And she wants these women to represent the new wave of female wrestlers. She wants them to be the best they can be. But, unfortunately, I think that desire to protect and care for these women takes over her own desires and what’s best for her. So I think that’s her biggest struggle, especially in Season 3. She’s asking herself, ‘Where do I see myself in this world? And what do I actually want from it?’ You know? She’s ever-growing.

Absolutely. I’ve been thinking about her character development and about how she’s grown over the series. One thing that’s really interesting about Carmen is that from the outset she already has this really rich backstory—coming from this family of men who became famous as wrestlers but tell her she can't. She’s at once an underdog but also has a lot of knowledge about the sport already. How do you feel about the way Carmen navigates that?

I think she’s got it down pat. Especially in the second season, the season when the girls start to get fans—she’s tells them, ‘Look, you always have to be in character. You can’t show these people your real personality; you have to be your wrestling persona.’ She’s always teaching people, always taking over and showing them ‘this is how you do it in the wrestling world.’
But I think the knowledge she doesn’t have is just real-life knowledge—how to interact with women especially--how to go out there and not be afraid and be confident in who you are. I think that’s what she’s searching for in this group. She’s searching for someone to show her how she can be the person she wants to be. I think with Ronda marrying Bash—those were the two people who were gonna show her, and they basically deserted her.

Can you tell me a bit about what’s in store for Season 3? Would you say it’s a departure from Seasons 1 and 2?

100 percent, Season 3 is a departure from Seasons 1 and 2. It’s unlike any season we’ve ever done before. But with that said, the thing I love about TV shows is I love when they grow. And the way they grow is that they change. I think sometimes that freaks the audiences out because they want to come and they want to see—from our show—the wrestling, the kitschy-ness, the ode to the ’80s. But the way we’re growing this season is that it’s a lot less wrestling, a lot less performance. It’s diving into the intimacy of the relationships behind the performance. We’re really getting to the nitty-grittiness of how these women’s lives are affected by being on this show. And it resonates in so many different ways. You have Debbie, who’s in Vegas now, she’s away from her son—how is she dealing with that? You have Carmen, who thinks this is her big break. But she’s starting to realize that it’s so repetitive, and she’s not really growing within the show—what is she going to do about that? Then you have Cherry who’s like, I’m giving up possibly having a family with my husband to be on this show—is it worth it? That’s what we’re focusing on. It’s a lot darker. It still has its comedic moments, but we’re trying to get at the root of everyone’s drama. 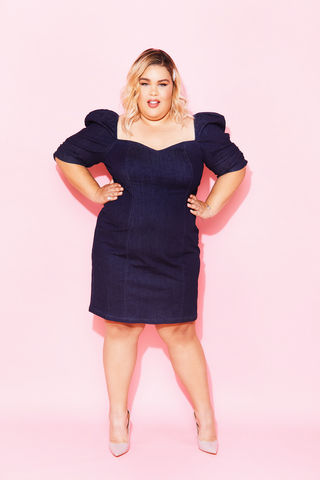 Right, that makes a lot of sense. What’s refreshing to me about GLOW is that it does justice to the messiness of reality. And it doesn’t sanitize the history of the Gorgeous Ladies of Wrestling. We see these women toying with these archetypes—Machu Picchu and Liberty Bell and Junkchain. I think there’s a lot of interesting play happening with those caricatures, breaking them down. Would you agree? Is that something that drew you to this script?

I think you’re definitely right. I remember when we first came out in Season 1, I read so many articles where people who didn’t really like the show would say, ‘They’re trying to push their feminist agenda down our throat, they’re trying to push racial equality.’ We’re not trying to push anything. We’re trying to tell stories that are authentic. And, also, I think some people are getting confused: just because the #MeToo movement is happening now doesn’t mean it hasn’t been happening for the last 50 years. We want to tell stories about what these women really would have gone through in 1985. And as disgusting and unfortunate as it is, they’re going through the same things we’re still going through now. Liz [Flahive] and Carly [Mensch]—our showrunners—talk about that a lot. They want to be truthful to what happened.

For me, that’s definitely one of the things that drew me to this project. We don’t try to sugarcoat anything. We don’t try to cover anything up. We’re trying to point out the things that are wrong, how people are dealing with them, how people are trying to change them, or how they unfortunately realize, ‘Okay, I have to go along with this for right now.’

I mean, come on, in the episode where Ruth pushes off the advances of the broadcast president, Debbie---a woman, tells her she should’ve gone through with it. That, to me, is red lights. But, unfortunately, that’s something some people out there do think. So I think feminism needs to look at all angles of women’s lives.

I do know, too, that one of the plus sides to this truthfulness is that it permeates throughout. It’s not just in the storytelling: it’s in the production design, it’s in the wrestling moves, it’s in the costumes. We’re really trying to be in 1985 in all aspects of this show.
I definitely see that. GLOW totally embraces that vibrancy and humor and brashness of the ’80s. To me, there’s a lovely tackiness to that period, at least in the way it’s retained in our cultural memory, the ’80s are just an indulgence in color and boldness.
Exactly. But there is one thing I’m a stickler about. I’m such a stickler for 1980s dancing. We go to a club in Season 3, toward the end of the season, and I saw people going out there doing some grooving, almost grinding in scenes. I was like, ‘Whoa, whoa guys, have you seen 16 Candles? You gotta do the sharp finger snapping.

And you know, I see a lot of tv shows set in the ‘80s and, no offense to them, but they make me think of an ’80s-themed frat party, where everyone shows up with side ponies and workout gear. They think that’s the ’80s, but there’s so much more to it that we bring out.

I want to switch gears a bit. You’ve spoken a couple times about the roles you’ve had in the past before GLOW and how you’ve sensed sometimes, am I being typecast? Am I being pigeonholed in these spaces? This role is so layered, and Carmen is such an empathetic presence on screen. What first attracted you to the role? Do you and Carmen share any commonalities?

I think Carmen and I are a lot alike. We’re sweet, kind-hearted people who sometimes put the well-being of others before our own. I’m working on that, she’s working on that too. But we differ in that she comes from a family that doesn’t really support her and therefore her confidence in herself isn’t as high as it should be. I come from an extremely supportive family and have been quite confident for a while in my own skin. It’s fun to play that vulnerable part. It’s also the challenge of playing her. Sometimes I think, ‘Come on Carmen, stand up for yourself! What are you doing?’ But then I remember, that’s not who she is—yet. She’s working, she’s still growing.

What attracted me to the role, no joke, were the words “gentle giant.” That was in the character breakdown. I just saw the word “gentle” and said, ‘I have to go for this character.’ Like you said, I did feel I was being typecast. I was being considered for the same mean-girl bullies: prison guard, prisoner, those kinds of aggressive roles. I think they were all based on physicality. People think bigger people can’t be kind and can’t be sweet.

And you know, representation is very important, and it’s especially important to me, being someone who was obsessed with film and television from a very young age but never saw myself represented properly on TV. To hear that people are gravitating toward me is heartwarming, and it’s one of the reasons why I want to continue doing this: for all the people who see themselves in me. But, especially this year, what I’m having to deal with is the constant need to have to be that reason. I do so many interviews and so many photoshoots where that’s the main plug: look at this girl, she’s diverse, she’s plus-size, let’s celebrate that.

Right, and I think being placed in that position, being made a representative in that way can also serve as a kind of typecasting too.

Yes. Here I was, breaking these boundaries, making sure the biracial community and the plus-size community are represented in this character. The next level is, by representing you, I’mma just go do the work. I’mma just be.

So looking forward, what’s next for you? Do you have any roles or projects you’ve had your eye on?

Always, a part of my dream to be in this business is to have my own production company. I want to produce. I want to direct. That’s definitely in the back of my mind and inching ever closer to the front of my mind. I want to have that opportunity to tell different stories and give that chance to other people to tell their stories, since that chance was given to me throughout my time in this business. Right now, I have my eye on Faith—a plus-size superhero that Sony Pictures is doing with Valiant comics. I’m eyeing that one hard. But I’m still new to this business. I want to play diverse characters. I want characters with depth. I want to work.