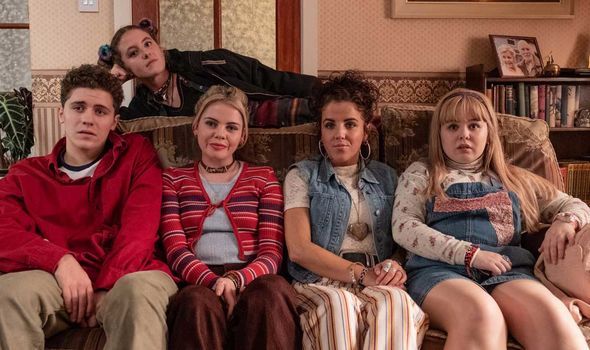 Derry Girls, Lisa McGee’s award-winning TV show about four teenage girls living in Derry (“or Londonderry, depending on your persuasion”) is back! Just like sophomore albums in music, second seasons of TV shows usually are not as good as season one – but not this time. The girls are better, bolder, and hopefully coming back for season three. The dramatic narrator Erin, her quirky cousin Orla, her high-strung best friend Clare, up-to-no-good Michelle, and James, the eternal butt of his friends’ jokes, still balance the trials and tribulations of being a teenager during “the Troubles,” one of the longest conflicts between Catholics and Protestants in Northern Ireland.

Season one’s final scene – the juxtaposition between the girls dancing while the adults were in utter shock staring at the TV, hearing the news about a fatal bombing – powerfully illustrated the bizarre reality of daily life during civil unrest. Season two doesn’t open with the direct aftermath of the bombing, but with well-intentioned reactions. Father Peter, whom the girls accidentally drove into a spiritual crisis last season, has returned after his “sabbatical” (he “shacked up with that slutty hairdresser,” but then was “dumped,” as Michelle puts it), and has organized an overnight retreat so that the girls mix with Protestants. While the eternally disgruntled Sister Michael and her Protestant counterpart Janet Turner bond over their shared disaffection, the teenagers struggle with finding similarities between Protestants and Catholics – only to later agree that their parents are annoying.

Season two still contains plenty of ’90s nostalgia and pop culture references, such as its amazing soundtrack and a subplot around Keyser Söze’s identity. But despite the show’s new global audience, creator McGee also features local events more prominently this season, staying true to her original goal to make an authentic show about her hometown. (An example of this is an episode about a polar bear escaping from the Belfast Zoo, on the day of the only TakeThat concert in Belfast.)

There are notable changes this season, though: the adults (especially Da Gerry’s and Grandpa Joe’s hilariously absurd feud) play bigger roles. Yet they do so without overshadowing the girls, who are still the real focus of the series. They are still not “nice girls,” but parallel to the peace process, which is depicted mostly through TV and radio announcements, they are also slowly growing up. After coming out in season one, Clare Devlin is still a hot mess of anxiety, yet she becomes more comfortable breaking rules, even if she has to justify it in her own, signature-Clare manner (“right is wrong, and wrong is right”). Boy-crazed Michelle may be convinced that Robbie Williams is sending her messages through the TV, but more than ever, she is protective of her friends, and even includes James in her circle. Erin is still an emotional whirlwind, but seems to slowly realize that she may be attracted to James. James himself has the largest character arc: he is faced with the question of “what is home?” Is it Derry, the place for which he has developed “Stockholm syndrome,” or London, where his mother lives? Through all of these changes though, Orla is still Orla: contrary, quirky, yet unshakeably confident in her abilities and herself.

Mirroring the final scene of season one, the series ends on a hopeful note, with President Bill Clinton’s historic speech in Derry shown through a TV screen.

Derry Girls’second season is, again, timely commentary on events in the U.K. Almost fifty years after the infamous “Bloody Sunday,” some of the perpetrators have stated “they would do it again.”While marriage equality and improved reproductive rights may be around the corner,  a hard Brexit is more likely than ever, endangering the Good Friday agreement, showing us once again, how fragile the future of Northern Ireland is. Derry Girls’ central message of finding resilience in laughter, therefore, is more valid than ever.

New episodes of Derry Girls are now streaming on Netflix.