This Fall, We’re Getting A Brand-New “Nancy Drew” 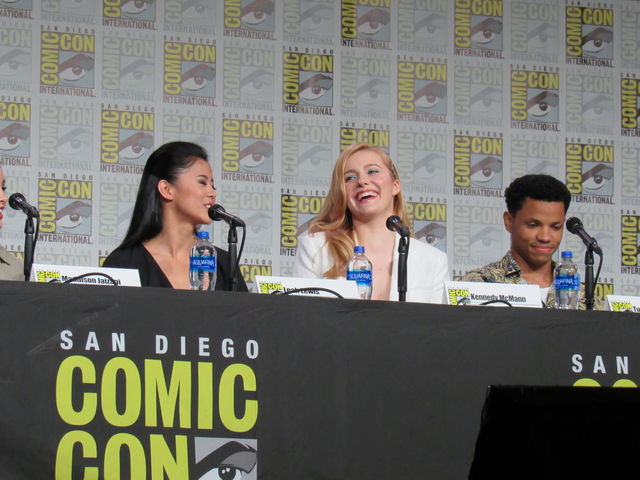 In order to be a good detective, one must ask questions, be curious, and have a dogged determination to find answers. For the past 90 years, Nancy Drew has essentially been using the scientific method in order to discover the mysteries in her town and now, for the first time ever, she will be brought to the silver screen.

Audiences were thrilled to see this new adaptation during an exclusive preview at this year’s San Diego Comic Con (SDCC). After the screening, showrunners Noga Landau, Melinda Hsu-Taylor, and Stephanie Savage, along with the entire cast, spoke on a panel.

The takeaway? This isn’t the Nancy Drew from your grandmother’s youth. Unlike the nearly perfect girl from the detective books, this Nancy, played by Kennedy McMann, is all grown up. She is also flawed and has to grapple with her own demons and loss at the beginning of the series.

“One of the strengths of Nancy Drew is that it has evolved with time,” English actor Tunji Kasim, who plays Ned “Nick” Nickerson, told the audience.

Nancy Drew first came out in 1930 as a female counterpart to publisher Edward Stratemeyer’s Hardy Boys. The books were written by a variety of ghostwriters under the pseudonym Carolyn Keene, but always centered around a girl detective who would solve mysteries of murder and of the supernatural. Oftentimes, she would get ahead of the local police and, in a way, did their job for them. This was pretty forward-thinking for the time: after all, women had just gotten the right to vote roughly 10 years before the first Nancy Drew book dropped.

“I have solved some mysteries, I'll admit, and I enjoy it, but I'm sure there are many other girls who could do the same,” Nancy says in Nancy’s Letter. The books, though they were written for a younger audience, addressed feminism decades before it hit the mainstream.

The show is inspired by the series, but none of the books will be directly adapted. The showrunners said that there will be Easter eggs, though, referencing the books in various episodes.

And what makes this adaptation really exciting is that one can tell, by the tone of the show, that women were behind the camera and in the writer’s room. In fact, the series was executive-produced by an all-female team.

There is a wide range of diversity both in front of the camera and behind it. Executive producer Hsu-Taylor said she was attracted to Nancy Drew books when she was younger because, as the only non-white person growing up in her small town in Maine, she always felt like an outsider.

“I really loved any fiction [about characters] that weren’t on the inside of things,” Hsu-Taylor said, and Drew is undoubtably an outsider: a young woman who doesn’t want to settle, and has always been ahead of the curve. However, that same gift is also her burden, making Drew that much more relatable.

Executive producer and writer Landau said that, in the series, we can expect to see Nancy Drew solve more supernatural mysteries. Although they are on the same network, Nancy Drew and Riverdale are not in the same universe, so a crossover will be unlikely.

Overall, the show is a breath of fresh air. Lately, we’ve seen some female-led films and superhero shows with women solving problems with their brawn, but on this show, our hero uses her brain – with a little help from her friends George (Leah Lewis), Bess (Maddison Jaizani), Ace (Alex Saxon), and Nick. She’s as brilliant as Sherlock Holmes, and also a little broken.

If the first episode is indicative of the series, then audiences will have a lot of fun trying to figure out who the bad guys are, and whether Horseshoe Bay really is haunted.

“Everything will be twisted, inverted, and re-written,” Landau said.

Nancy Drew will air this October on The CW.

Top photo by the author