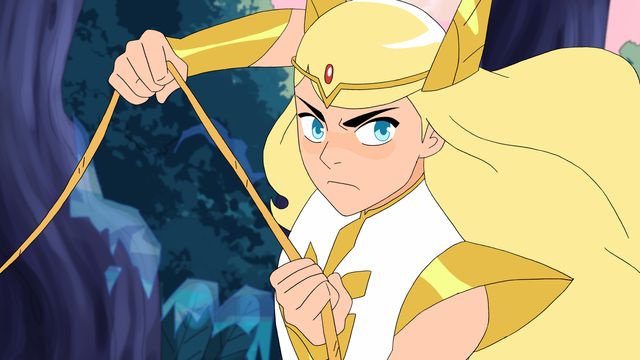 There have been many versions of the hero’s journey, but rarely has that journey been given to women in our stories—until now. We have Rey from Star Wars, but the true hero kicking down all the hero’s journey troupes is She-Ra and the Princesses of Power.

Ever since the beginning of season one, the classic reboot of She-Ra and the Princesses of Power, written and produced by Noelle Stevenson, has been all about exploring the heroics and growth of the titular character and her friends. Seasons one and two helped develop the best friend squad between Glimmer, Bow, and Adora, and gave us the best frenemy relationship on television today: that of Catra and Adora. Oh, and also TV’s most memorable line: “Hey, Adora.”

Season three is all about the audience exploring with Adora not only who she is, but where she came from.

Before the premiere of season 3 on August 2, Noelle Stevenson, Lauren Ash, Marcus Scribner, Karen Fukuhara, and Aimee Carrero spoke on a panel and previewed never-before-seen footage to a room packed with fans at San Diego Comic-Con.

“We’re going to throw characters to places they’ve never been before,” said Stevenson at the panel.

Without giving away any spoilers, I can say season three, of all the seasons, is the one that truly takes a look at the hero's journey and places it under the microscope. This is super important: there is a dearth of stories that involve the hero’s journey from a girl’s perspective.

More importantly, this story isn’t just about the hero; it’s an ensemble piece. Adora’s destiny as She-Ra has a rippling effect, which is a more realistic and engaging way of storytelling. Often we hear “it is your destiny” in such shows, but sadly, that destiny for women has always been as a supporting character for someone else. What makes She-Ra special is that She-Ra and the Princesses of Power are all growing. Their destiny and their friendship are equally important.

“There has got to be this journey you go on,” Carrero, the voice of She-Ra, said. She explained that the journey which began in the fall and winter during seasons one and two only gets more intense in season three.

In the first two seasons, Adora, the best friend squad, and all the princesses of Etheria have been fighting the Horde, an evil organization hell-bent on literally destroying the environment and the world. Adora is destined to carry the sword of protection and, when she’s harnessing the power of the sword, she’s turned into an 8-foot-tall warrior lady also known as She-Ra.

But before Adora was She-Ra, she was raised by Shadowweaver and Hordac in the Horde, where she was best friends with Catra. Once Adora realizes the Horde is bad and wants to destroy Etheria, she leaves the Horde and joins the other princesses as She-Ra.

A show is only as good as its villains, and the villains in She-Raare just as complex and multidimensional as She-Ra herself. Catra and Scorpia have a budding friendship. which Scorpia wants to be something more, and season three will continue to explore the friendship between the two, and why Scorpia stays even when Catra is mean.  “Scorpia is the most loyal being,” explained Ash, the voice of Scorpia, who was charming as can be in real life.

Characters drive the story, and this is especially true in season three. Scorpia, Catra, and Adora and the funky bunch explore friendship, romantic relationships, and the hurt of abandonment and betrayal. Through this fantastic story, we explore real-world issues such as the representation of same-sex couples, diversity, and the general struggle between good and evil.

“Everything is a mirror to what we’re experiencing at the time when you are living,” Stevenson said.

There is also a very famous special guest in season three, which I won’t spoil. 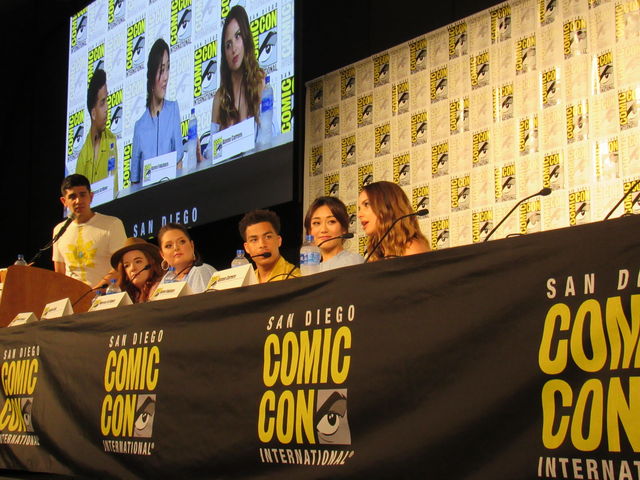 If you’re already a fan of She-Ra, the only spoiler we were given by Carrero is that “Adora is tricked into believing in herself,” and it happens quite often. Every character has growth and experiences a connection with someone else, even the bad guys.

One thing is certain about season three, and that’s that it is a constant adventure. So, in the words of Carrero, “Don’t get too comfortable.”

Season three of She-Ra will premiere on Netflix on August 2.

Tags: She-Ra , Netflix , San Diego Comic Con , girl power
Support Feminist Media!
During these troubling political times, independent feminist media is more vital than ever. If our bold, uncensored reporting on women’s issues is important to you, please consider making a donation of $5, $25, $50, or whatever you can afford, to protect and sustain BUST.com.
Thanks so much—we can’t spell BUST without U.